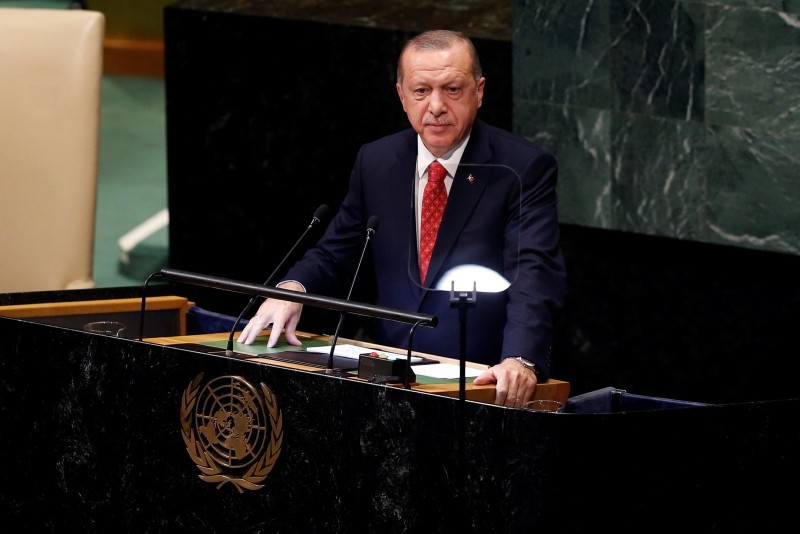 President Recep Tayyip Erdoğan called on world leaders on Tuesday to establish a global body to protect the victimized and lend a helping hand to those in need to provide hope for future generations, instead of an organization that serves only the interests of five countries.

Addressing the 73rd session of the United Nations General Assembly, President Erdoğan said that there were 194 countries under this roof and all should be represented, not just five veto-entitled members.

He warned that the U.N. risks becoming an organization with "a reputation for failure" by catering to just five world powers unless it's restructured, particularly in the Security Council.

"The U.N. has moved away from the capacity to meet the expectations of humanity through peace and welfare," he said, referencing Bosnia, Rwanda and the plight of the Palestinians and said the world body must be restructured if it is to succeed.

In his words, "We believe that when we say the world is greater than five, we are becoming the voice of the common conscience of the human race." That's a reference to the U.S., China, Russia, France and Britain, the Security Council's five permanent members and the only ones with veto power.

The Turkish president has long advocated for reforming the structure of the Security Council, pushing the motto, "The world is bigger than five."

Erdoğan said the U.N. has carried out work and achieved considerable successes over its 73-year history.

"However, it is also a fact that over time the United Nations moved away from meeting the expectations of humanity for peace and welfare," he added.

Amid a standoff with the United States over the fate of a U.S. pastor detained over terror charges, Erdoğan also asserted that Turkey could not remain silent over the use of sanctions as weapons.

"None of us can remain silent to the arbitrary cancellation of commercial agreements and the use of economic sanctions as weapons," he said.

"We are in favor of solving our problems through conducting a constructive dialogue on equal terms."

Turkey will continue to stand with the "oppressed" Palestinians and will protect the historical and legal status of Jerusalem, Erdoğan said, referring to the recent U.S. decision to cut aid to the U.N. agency for Palestinian refugees.

He underscored there needs to be "comprehensive reform" in the structure and functioning of the U.N., particularly the Security Council.

Erdoğan said Turkey continues its efforts towards a fairer world while implementing a global humanitarian diplomacy.

He recalled that Turkey hosts 4 million refugees, 3.5 million of which are Syrian, and provides them with services that are "incomparable" elsewhere in the world.

The total amount Turkey has spent for Syrian refugees alone is at $32 billion.

"However, so far, the external support we have received is $600 million from international organizations and €1.7 billion from the EU until now," Erdoğan said.

Erdoğan said he expects "more abundant and flexible support" for Turkey, which has prevented a large refugee influx to spill over elsewhere in the world, foremost to Europe, thanks to the opportunities the country has provided to refugees.