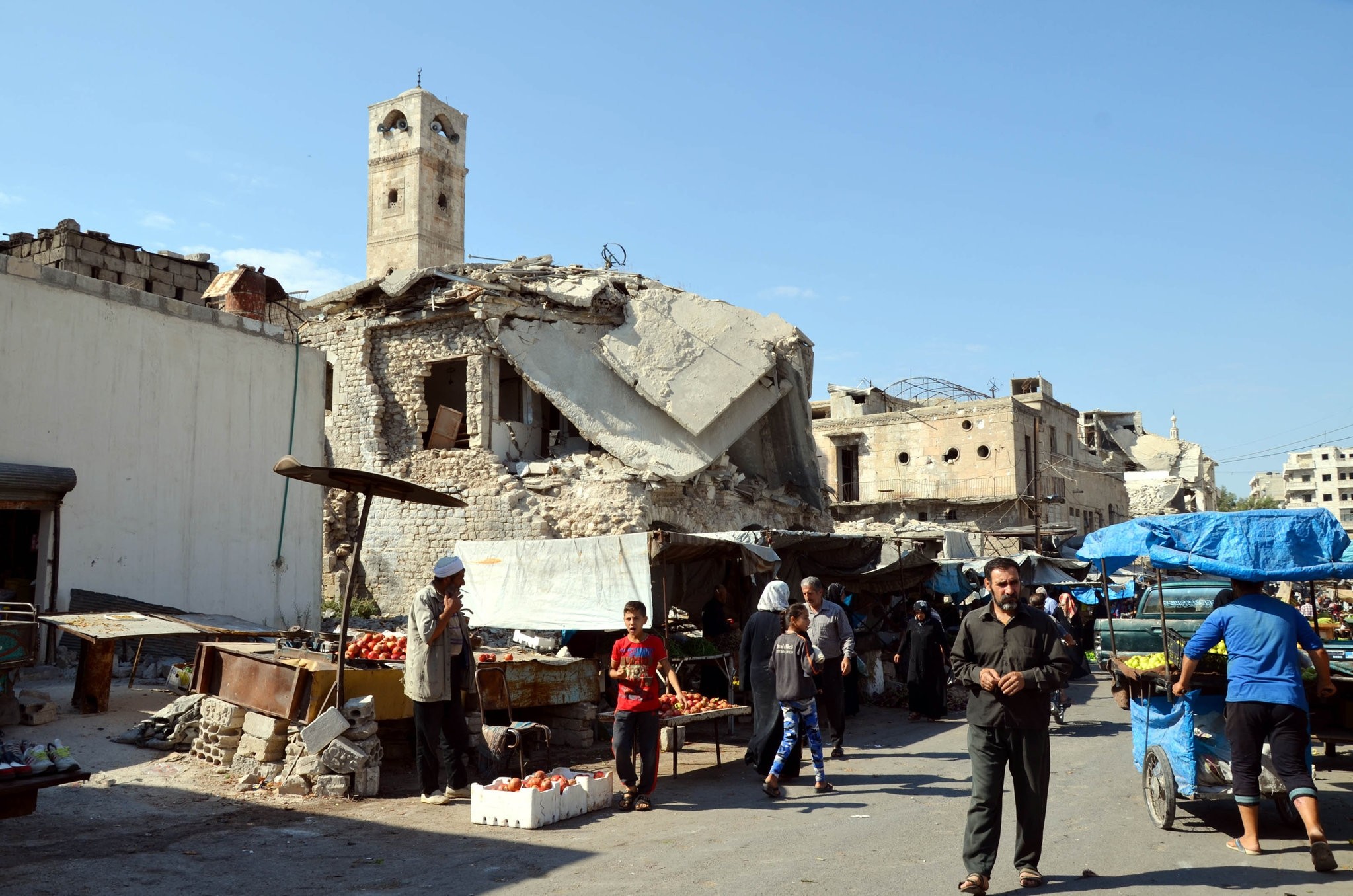 Prior to the Sochi deal between Turkey and Russia on the demilitarization of Idlib, the province had been targeted by fierce airstrikes from Russia and the Syrian regime, who claimed they were fighting the HTS terrorist organization.
by daily sabah
Oct 08, 2018 12:00 am

The Syrian opposition announced on Saturday that they have started withdrawing arms from northwestern Syria's Idlib province.

The move comes after an agreement reached by Turkey and Russia to create a demilitarized zone of roughly 20 square kilometers until Oct. 10.

The opposition coalition's spokesman, Naji Mustafa, said over the weekend that the National Liberation Front (NLF) "has started pulling out its heavy weapons from the zone."

He underlined that "light and medium weapons and heavy machine guns up to 57mm will remain in place," and added that the process is continuing in coordination with Turkish officials.

Under the deal, opposition groups in Idlib will remain in areas in which they are already present, while the radical groups will leave the region. In the meeting at Sochi, Erdoğan called on the radical groups to lay down their arms. Russia and Turkey will also conduct joint patrols in the area with an aim of preventing renewed fighting.

The NLF, which is the largest armed opposition group in Syria, previously stated that "most of the heavy weapons are not on the front line anyway."

The group also said it was opposed to the deployment of Russian forces in the demilitarized zone.

As the deadline for the demilitarized zone approaches, the opposition groups are continuing to withdraw heavy arms from the region. Yet, Hayat Tahrir al-Sham (HTS), an al-Qaida-linked group formerly known as the Nusra Front, which is the most powerful terrorist alliance in Idlib has yet to announce its stance on the deal.

After the fall of Aleppo in November 2016, dozens of opposition groups, including Ahrar al-Sham and the HTS, have squeezed into Idlib. The HTS is recognized as a terrorist organization by Turkey, the U.S. and Canada.

While most opposition groups have welcomed the deal, some factions have continued to object. Jaish al-Izza, which was formerly backed by the U.S., was one of the groups to reject the deal. It said the deal "eats into the liberated [opposition-held] areas and bails out Bashar Assad."

Idlib is the last remaining de-escalation zone and home to three million people including opposition fighters and internally displaced people coming from other parts of the war-torn country. Prior to the Sochi agreement between Turkey and Russia on the demilitarization of Idlib, the province had been targeted by fierce airstrikes from Russia and the Syrian regime, who claimed they were fighting the HTS.

Ankara's efforts to prevent a humanitarian crisis in Idlib have been welcomed internationally, pointing out its pivotal role in staving off a full-scale regime attack. Turkey expects the implementation of the agreement and is paying utmost significance to the existence of the opposition groups.

The implementation of the Idlib agreement and clearing the region from radicals has been considered as a difficult task, yet Turkey is sticking to the deal exerting all necessary efforts.

In relation to the issue, Putin said last week, "We see that Turkey is approaching the agreement with great gravity, fulfilling their obligations to ensure that several radical groups and heavy weapons from the demilitarized zone are withdrawn."

"I have every reason to believe that we will achieve our goals and that means no large-scale military actions will occur there [in Idlib]," he added.

Meanwhile, the Syrian Observatory for Human Rights reported that fighting erupted on Friday between opposition groups and HTS terrorists near the planned demilitarized zone.

According to the monitor, the fighting began between the HTS and the opposition Nour al-Din al-Zinki group in the town of Kafr Halab. Observatory head Rami Abdel Rahman stated that Zinki sent reinforcements to the area, and the clashes expanded to several areas. It added that the NLF joined in as the HTS had reportedly been trying to arrest a local commander in the town on the western edge of Aleppo province. The monitor also said that the HTS had taken two towns, including Kafr Halab while at least three civilians, two NLF fighters and an HTS member were killed.