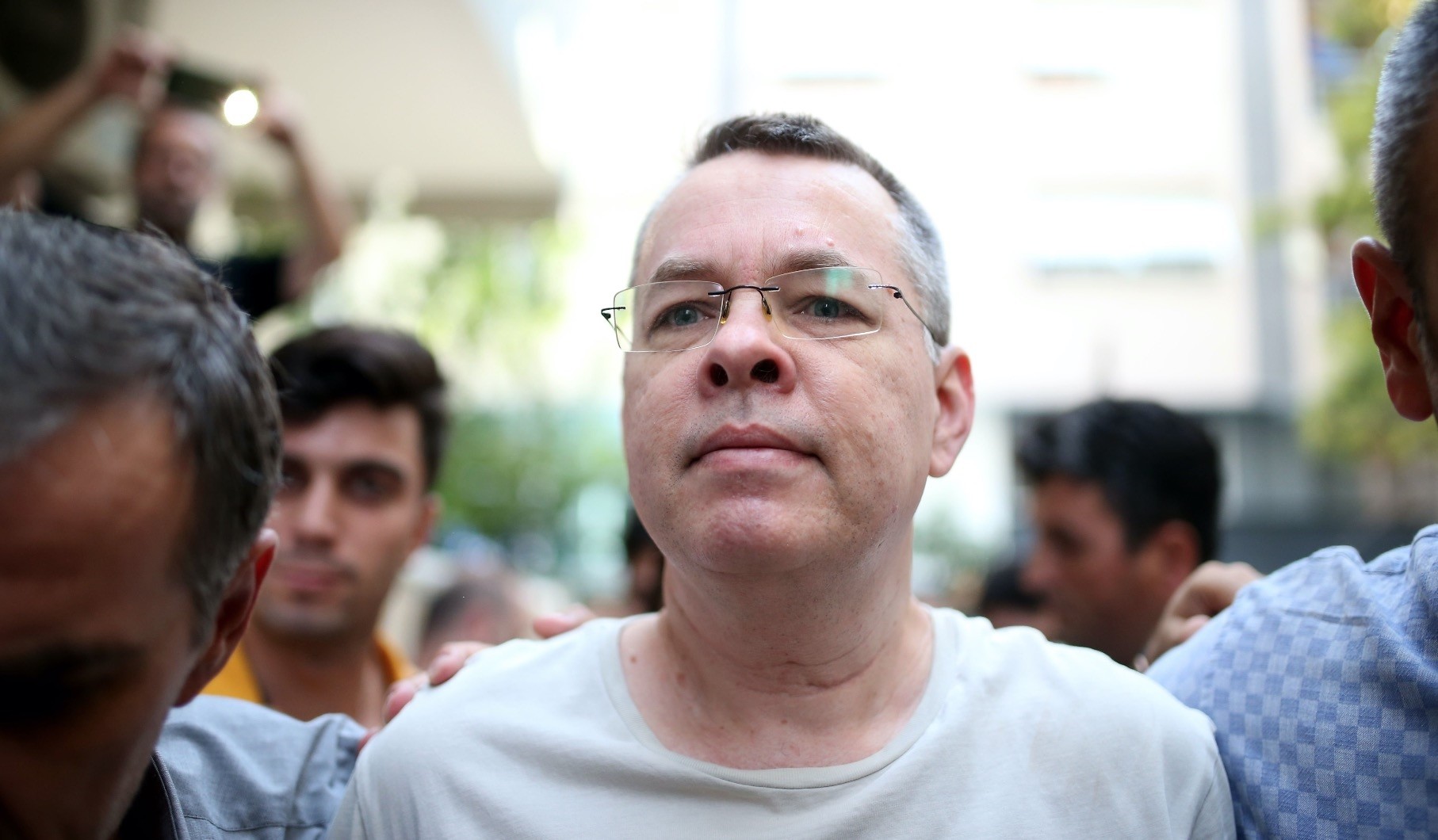 Pastor Andrew Craig Brunson is escorted by plainclothes police officers as he arrives at his house in Izmir, July 25.
by daily sabah
Oct 12, 2018 12:00 am

Evangelical pastor Brunson, whose detention has strained Turkey-U.S. relations, will have his fourth trial today. Although Washington continues to insist on his release, Ankara has underlined that the Turkish courts will make the decision, emphasizing that the legal process should be respected

The fourth hearing of American evangelical pastor Andrew Brunson, whose trial on terrorism charges sparked a row between Ankara and Washington, is scheduled to be held today.Ismail Cem Halavurt, Brunson's lawyer, told Deutsche Welle on Wednesday that he is not expecting Brunson to be acquitted but expects the house arrest and travel ban imposed on his client to be lifted in today's hearing. Despite Halavurt's expectations, today's sessions may not be the last and the case could be postponed to a later hearing.

"I'm very hopeful that before too long Pastor Brunson, he and his wife will be able to return to the United States," said U.S. Secretary of State Mike Pompeo on Wednesday, expressing his wish on release of the pastor.

Relations between Turkey and the United States were strained over the past few months by the trial of Brunson in Turkey on terrorism charges. Brunson, who has worked as an evangelical pastor at the Evangelic Resurrection Church in the western city of Izmir for the past 20 years, was arrested in Turkey in September 2016 for alleged links to the PKK terrorist group and the Gülenist Terror Group (FETÖ), who orchestrated a coup attempt on July 15, 2016.

Brunson is charged with "seizure of confidential state information for the purposes of politics and military espionage, attempting to abolish the Grand National Assembly of Turkey, the government of Turkish Republic and constitutional order." The pastor faces 35 years in jail on charges of espionage and committing crimes on behalf of FETÖ and the PKK. He was moved from jail to house arrest last July due to health concerns.

On the Turkish side, President Recep Tayyip Erdoğan said Tuesday in relation to the issue that: "Since Turkey is a state of law; I am not in a position to interfere with the judiciary. Whatever the judiciary decides, I have to comply with that decision. Those involved with this also need to abide by the judiciary's decision."

Following the arrest of Brunson, U.S. President Donald Trump, who received 81 percent of the evangelical vote in the 2016 elections, made it abundantly clear that the United States expects Turkey to release Brunson immediately and pushed deadlines for his release. Accordingly, U.S. Vice President Mike Pence also threatened Turkey by saying, "Release Brunson now or be prepared to face the consequences." However, Turkey refused the demands, emphasizing that it is a judicial case.

In response, Washington slammed sanctions on Turkish Interior Minister Süleyman Soylu and Justice Minister Abdülhamit Gül due to their "leading roles in the organizations responsible for the arrest and detention of Brunson." Moreover, U.S. Congress passed a bill delaying the delivery of new generation fighter F-35 aircraft to Turkey.

Trump also doubled tariffs on Turkish aluminum and steel on Aug. 10 to coerce Turkey into making a decision.

Tensions further mounted between the two NATO allies as the tariffs and sanctions led to a plunge of around 40 percent in the value of the lira against the dollar this year.

However, Erdoğan remained defiant over the sliding lira and vowed Turkey will not be brought to its knees with economic manipulations. Accordingly, Ankara responded in kind by raising tariffs to 100 percent on several U.S. products, including alcohol, tobacco and cars. Many countries, including Russia, Pakistan and China, expressed their support for Turkey. German Chancellor Angela Merkel also criticized Washington by saying that it is in everyone's interest for Turkey to be "economically prosperous."