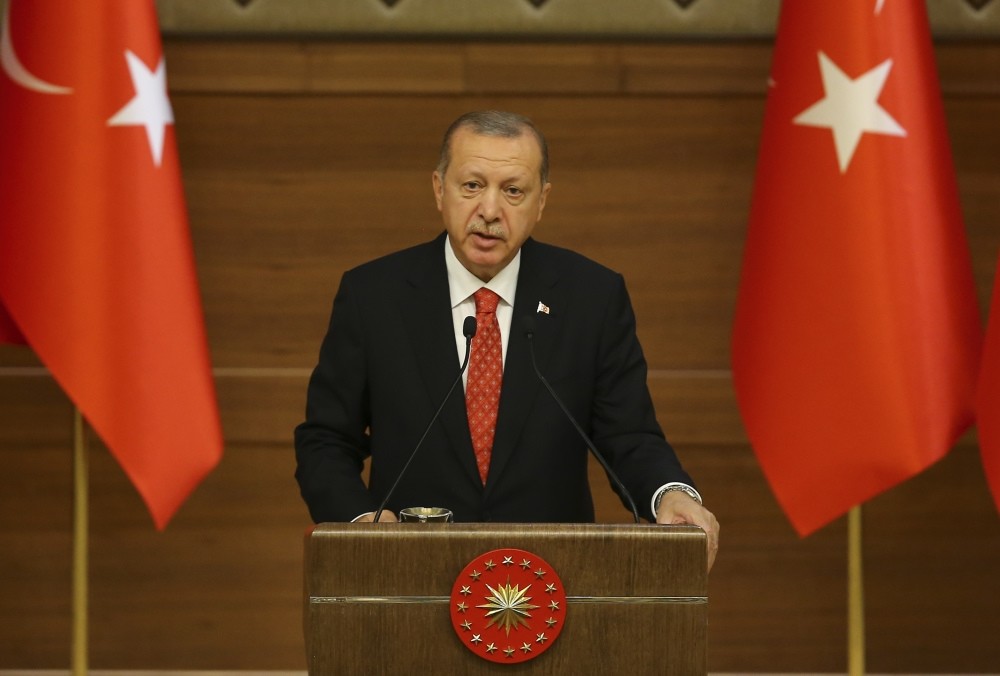 President Recep Tayyip Erdou011fan speaks during a meeting with muftis at the Beu015ftepe Presidential Complex in Ankara, yesterday.
by daily sabah
Oct 16, 2018 12:00 am

Clergy in Turkey with merit and competence should be in touch with the public to avoid new cases of religious exploitation, Erdoğan said referring to FETÖ, which he said was the result of a problematic system

The Gülenist Terror Group (FETÖ), which for years exploited people's religious sentiments to recruit followers, is not the reason but rather the result of a problematic system, President Recep Tayyip Erdoğan said yesterday.

Addressing a summit of provincial muftis at the Presidency of Religious Affairs in Ankara, Erdoğan said the fact that FETÖ infiltrated the state institutions and the nation over the past 40 years shows that there are some deficiencies.

"How is it possible that a humbug head of a shady group, despite so much heresy, is able to enter the faith world of our people?" Erdoğan asked, adding that self-criticism was needed on FETÖ.

On July 15, 2016, FETÖ carried out a failed coup attempt to overthrow the government and take over the state institutions. The attempt killed 251 people and wounded 2200 others.

"The fact that this group's threat was not seen is an important issue for all to think about," the president added.

"FETÖ is a disease caused by a system that is in a fight with its own nation, arrogant towards its citizens and othering its own people. FETÖ is not the cause, but rather a result of a problematic system," he said.

In the 1970s, FETÖ emerged as a religious group and then a peaceful movement that advocated interfaith dialogue and worldwide education for the poor and needy. However, FETÖ's decades-long attempts to infiltrate the police, judiciary, military and other state institutions were truly exposed during the July 15 coup attempt. The group's leader, Fetullah Gülen, has lived in the U.S. on a self-imposed exile since 1999.

For decades, the state looked down on citizens with religious sentiments, following exclusionary policies toward them, including banning women wearing religious headscarves from schools and public institutions. Such policies pushed people to get closer to establishments such as FETÖ, which ultimately exploited the goodwill of the average public for their own hidden agendas and interests.

Erdoğan also said that the threat posed by the shady cult is not completely over yet and that the fight against them will continue.

He added that the biggest fight against the group was carried out during the Justice and Development Party (AK Party) governments. "We were also late, and we paid for it," he added.

"If Turkey hadn't fought FETO since December 2013 despite the main opposition's obstruction, 2016 coup attempt would have turned out differently," the president said, citing the December 2013 plot against government ministers and leading businesspeople. Dec. 17-25, 2013 saw a graft probe and the detention of prominent figures in a FETÖ plot to overthrow the government.

The terrorist group faced more scrutiny after the coup attempt, which was its first attempt at using its adherents in the military to seize power, just three years after it had tried its hand at a coup through its infiltrators in the judiciary and law enforcement.

Tens of thousands of people have been arrested or detained since the failed coup attempt, with a similar number having been dismissed from public sector jobs for links to the terrorist group.

Erdoğan called on the muftis to take charge of the religious activities and warned against the emergence of illegal activities or figures who can exploit religion in their absence.

"We see what happens when the clergy with merit and competence do not come forward. When our clergy do not take initiative, the arena is left to charlatans like the FETÖ ringleader, ignorant who act on the superstitious and clowns," he said.

The president added that the religious representatives had a duty more than simply leading prayers at the mosques.