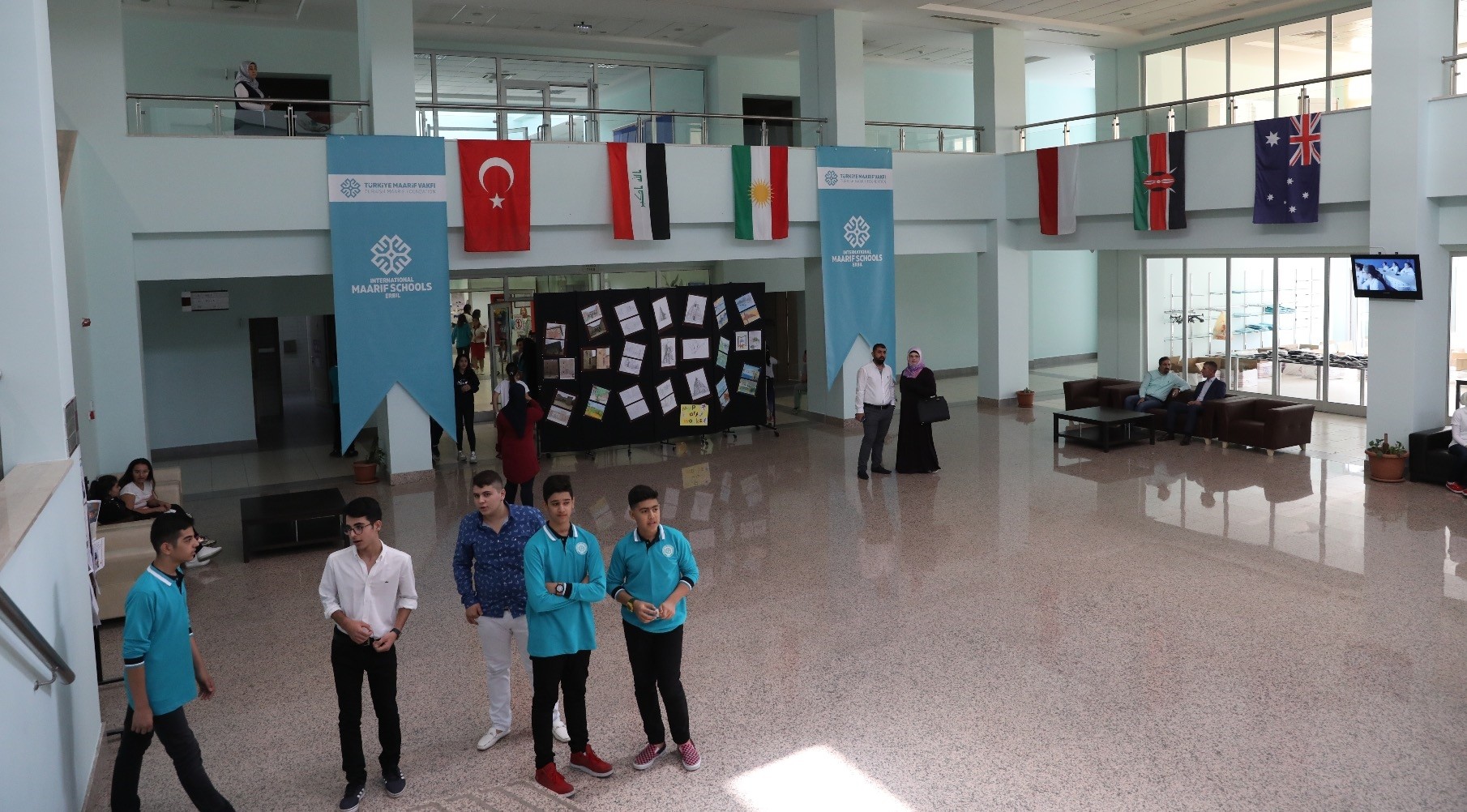 With 500 students, the Maarif International School has quickly become one of the most prominent schools in Irbil, thanks to the great interest shown by the local people.
by Mehmet Çelik
Oct 19, 2018 12:00 am

The Maarif International School, which was under the İhsan Doğramacı foundation previously, was transferred to the Maarif Foundation this June with 238 students. Since then, this number has increased to 500 students with locals showing great interest in it, making the school a leading one in the region in a short period of time.

As one of the physically largest schools in the Middle East, it has a total of 75,000 square meters of outdoor space and 33,000 square meters of indoor space. The school contains a preschool, primary, elementary and high school within itself. It is also the first school in the province to teach its ethnically diverse students robotics and coding courses as part of its International Baccalaureate accredited curriculum which is taught in four languages: English, Turkish, Kurdish and Arabic."Our aim is to build bridges between our people in the region by raising goodwill ambassadors, while also making our school more popular," said Mustafa Göksu, a Maarif Foundation trustee who is responsible for the Middle East and North Africa, ahead of the inauguration ceremony on Wednesday.

Currently, Turkey's Maarif Foundation, which is responsible for Turkey's education activities abroad in coordination with the Education Ministry and Foreign Affairs Ministry, is working to take over Gülenist Terror Group (FETÖ)-linked schools all around the world. Since its establishment, the foundation has made official contact with 90 countries, appointed directors to 40 countries and currently runs 162 schools.

"I believe the school will help carry our relations further. It is time to think in which areas can we expand our relations," Mehdi Eker, the ruling Justice and Development Party (AK Party) Diyarbakır deputy said yesterday during the opening ceremony.

Meanwhile, despite Turkey's demands from the KRG to hand over the administration of schools run by FETÖ, the KRG has not yet done so. However, talks over the transfer of such schools have recently taken new momentum.

Speaking to reporters ahead of the inauguration ceremony yesterday, Eker, said they held a "positive" meeting with KRG's Education Minister Pishtiwan Sadiq about the transfer of the schools to the Maarif Foundation. "We explained the threat of FETÖ for the KRG and for the region in detail. We hope to have positive outcomes," Eker said.

"The area of education is a humanitarian bridge. We would like to further develop our ties in education and also other areas. We are ready to provide any needed assistance to Maarif foundation," said Sadiq.

FETÖ opened its first school in the KRG in 1994. In 2008, the terrorist group opened a university in the region called Ishık. Currently, there are 19 FETÖ schools in the KRG and one university. There are 13,000 students attending these schools.

KRG Spokesperson Safeen Muhsin Dizayee said his government was ready to find a solution about transferring the FETÖ schools to the Turkish government. "A joint solution must be found. There were about 900 FETÖ-linked teachers here, now there are about 100-150 of them left only. We are ready for a solution," Dizayee said.

Dizayee also said that the KRG had seen the victory of the people during the July 15 coup attempt and just like the fight against the PKK, his government supported Turkey's fight against other threats to its national security.

"The opening of the Maarif International School in Irbil has been a cornerstone in the fight against FETÖ, while providing quality education to our students," Irbil Consul General Hakan Karaçay said during the opening ceremony yesterday.

"This terrorist group poses a threat to all the countries where they are [present]. We want our friends to see this threat," he added.

Both Eker and Dizayee also underlined the necessity to put strained relations behind and open a new chapter in Ankara-Irbil ties, which were severely strained when the KRG held an independence referendum last year.

"It is not necessary to hold on to the bitterness of past ties. We should look ahead and rebuild a relationship based on mutual interests," Eker said.

Last year on Sept. 25, the KRG in northern Iraq had held an independence referendum, which had angered Ankara. Tensions rose in the region when Iraqi Kurds overwhelmingly voted to secede. The referendum faced sharp opposition from most regional and international actors, including Iraq's neighbors - Turkey and Iran.