Despite any concrete evidence in Khashoggi case, one thing is certain: Saudis messed up 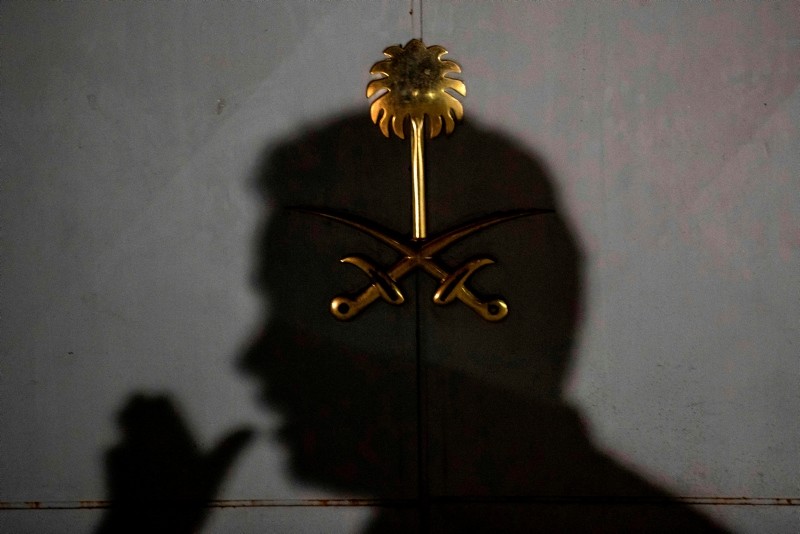 A Saudi official stands at the back door of the Saudi Consulate as Turkish forensic police officers conduct a second investigation in Istanbul, on October 17, 2018. (AFP Photo)
by Şeyma Nazlı Gürbüz Oct 23, 2018 12:00 am

From the day of Jamal Khashoggi’s disappearance at Saudi Arabia’s Consulate in Istanbul until today, a series of clues, despite the lack of conclusive evidence, proves that the more the Saudis attempt to extricate themselves from the murder case, the deeper they become submerged in a swamp of scandals

The last three weeks have been overwhelmed with the storm caused by the mysterious case of The Washington Post's Saudi journalist Jamal Khashoggi. Following news that confirmed the journalist's disappearance after he entered the Saudi Consulate in Istanbul on Oct. 2, Turkish authorities took immediate action to find out where he was. After a short investigation, they quickly came to the conclusion that Khashoggi never left the consulate and was most probably killed inside its confines. Yet, despite several searches and extensive investigations, the body of Khashoggi is yet to be found. This has led to a lot of guesses and the circulation of fake news on the issue. According to criminal investigative experts, although there is still a lack of evidence, one thing is for certain: The Saudis messed up big time.

"This is a murder that was planned in a very unprofessional way," Hatice Han Er, a criminologist, told Daily Sabah. "Usually, although a crime is pre-planned, things can mess up. In this case, we see that here." She added that things probably got out of control when unexpected violence erupted. Er said the "sloppiness" was surprising because the hit team, which Turkish authorities claim consisted of 15 people, was "actually a professional group." "They were the people who are professionals in their specific areas, including royal bodyguards, a forensic expert and a well-known pathologist. Still, the end result was a failure," she said.

On the same day of Khashoggi's disappearance, 15 other Saudis, including a forensic expert and several other officials, arrived in Istanbul on two private planes and visited the consulate while he was still inside, according to Turkish police sources.

All of the identified individuals have since left Turkey.

However, there are also experts who believe that this cannot be a planned murder. Mesut Demirbilek, a forensic expert who spoke on the issue to Turkish Hürriyet daily said there is no way that this was a premeditated murder.

"If this was a planned murder, than there are two explanations: They were either quite unprofessional people or they were strictly following orders without question," Demirbilek said.

In his opinion, there was probably a simple interrogation at first but when Khashoggi refused to answer questions, things might have gotten physical.

"If they were here only for the assassination, two people would have been enough and they wouldn't have done it within the consulate," he underlined.

Yet, Er insists that the Saudis' statement which claims that Khashoggi was killed by mistake during an interrogation is not convincing at all.

According to the criminologist, the reason the consulate was picked as the location for the murder was because Turkish security forces do not have a jurisdiction there. This may have caused the Saudis to think that they could get away with the crime more easily.

According to the Vienna Convention, all diplomatic missions are sovereign land, which makes the Saudi Consulate in Istanbul a Saudi territory.

The latest account includes details on how the team of 15 Saudi nationals sent to confront Khashoggi had tried to drug and kidnap him and then killed him in a chokehold when he resisted. A member of the team then dressed in Khashoggi's clothes and left the premises to make it appear as if Khashoggi had left the consulate.

"There was a team that consisted of 15 professional people who were present during the interrogation. These 15 men were more than able to calm down Khashoggi if they wanted to [in case of resistance from him]," she underlined.

She explained that there was also a pathologist among them, who is allegedly one of best in Saudi Arabia.

Er stated that even his presence alone suggests that a murder was expected and even planned.

"I mean, come on, his everyday job is to conduct autopsies," she said, implying that the forensic evidence must have been eliminated with the presence of a professional at the crime scene.

Criminal experts emphasize that although it is not impossible to commit such a murder without leaving any evidence, it is pretty hard.

When it comes to where to find the body, on the other hand, authorities seem to have come to terms on a few options: The sea, the forest or a rural, deserted area.

"We should search the consulate, the residence of the consul general and every vehicle they have used for every piece of evidence that is linked to the body. Yet, we should look for the body itself in the nearby forests, rural areas, seas and lakes," Demirbilek said.

However, he underlined that when there is no exact information on the location to search for, it is a very difficult task to do.

"Still, I do not believe that he has been taken abroad or burned," he said, adding that if he was buried in the consulate or consular general's garden, the police dogs would have found the body.

Er, however, suggests that there is still the possibility that the body might have been buried in the consulate's garden or the basement.

"I believe that the garden of the consulate and the basement of the building should be searched more carefully," she said.

Still, she acknowledged that most probably he was either buried or disposed of in the sea.

"If they wanted to bury him, Istanbul is a very convenient place because it has a lot of deserted areas. When it comes to the sea, it is also quite convenient because it would make it much harder to find even the smallest piece of evidence," she expressed.

One of the rumors circulating in the media is that Khashoggi's body was cut into pieces.

"If he was dismembered as suspected, the main reason is they wanted to get rid of the body easily," Er said. "If it was me, I would destroy all the DNA evidence first. I would remove his teeth and cut off his finger tips or pour acid on them."