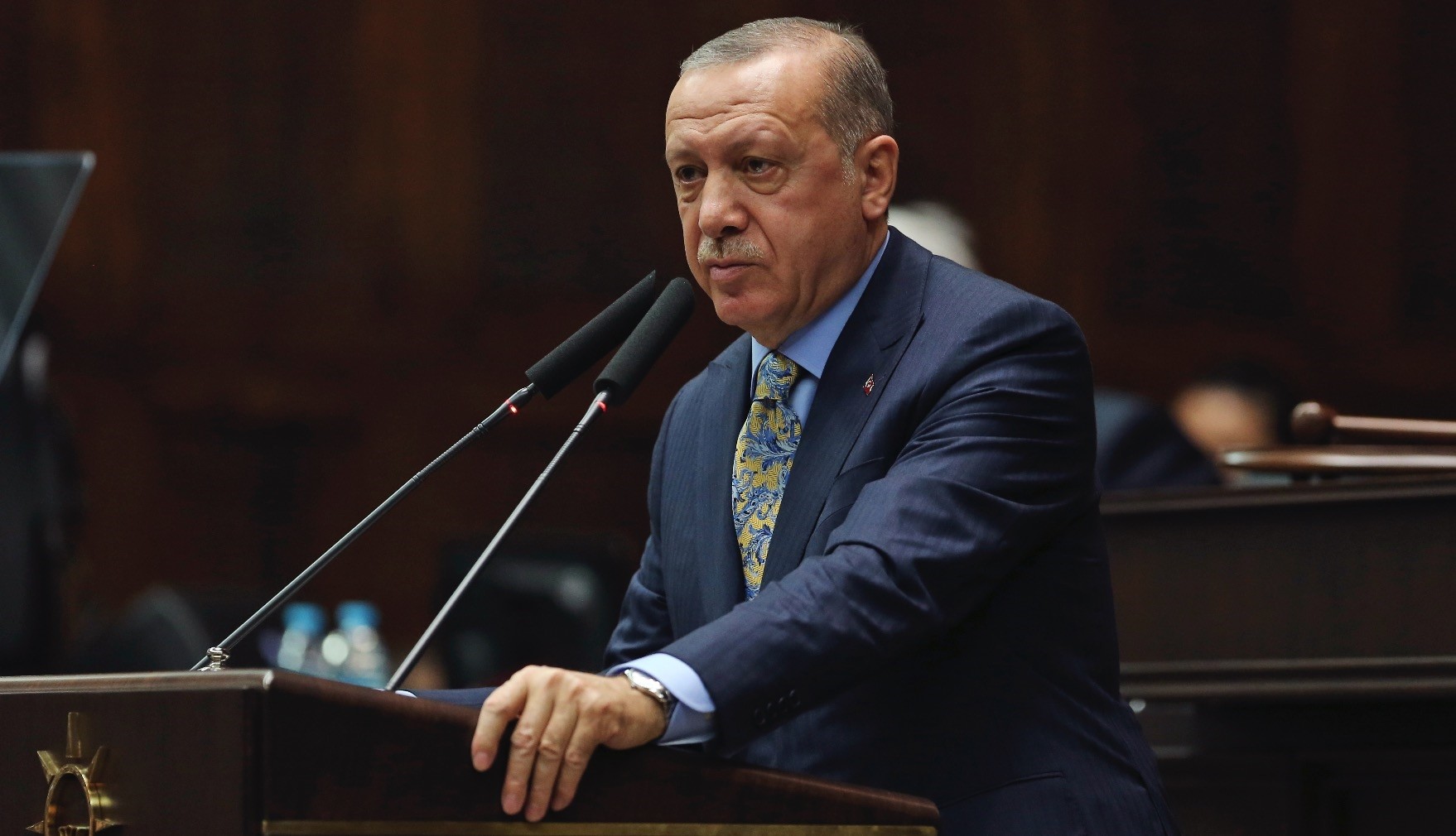 All those involved in journalist Jamal Khashoggi's murder plot should be brought to justice, Erdoğan said, calling on Saudi officials to answer questions to help further the investigation

The killing of 59-year-old journalist Jamal Khashoggi in Saudi Arabia's Consulate in Istanbul on Oct. 2 was a murder plot planned by Saudi officials for days, President Recep Tayyip Erdoğan said yesterday. He demanded answers from Saudi authorities to several questions regarding what he described as a "savage" murder and offered a proposal that those involved in the incident to be tried in Istanbul, as the location where Khashoggi's murder took place. Erdoğan began his speech by offering condolences to the Khashoggi family, his fiancee and media world in his speech that was closely followed by international media, and followed by a comprehensive timeline of "what happened" ahead of and after Khashoggi's disappearance on Oct. 2, when the Washington Post journalist entered the Saudi Consulate to obtain documents related to marriage.

"The murder of Saudi journalist Jamal Khashoggi was premeditated," Erdoğan said, adding that Turkey has strong evidence that it was planned. The president said that all the information and evidence that has been revealed until now, as well as the reconnaissance made by Saudi teams in Istanbul's Belgrad Forest and the northwestern province of Yalova ahead of the incident showed that Khashoggi was the victim of a "savage" murder. "To cover up such savagery would hurt the human conscience," the president said. Saudi Arabia had denied the murder of Khashoggi on Oct. 4, claiming the journalist had left the consulate, while failing to provide proof that Khashoggi had left.

Erdoğan said, however, the evidence showed that the camera was purposefully disabled and its recorder's hard disk was destroyed ahead of the incident.

On Saturday, Saudi officials backtracked and said Khashoggi had died following a fist fight during his visit.

Erdoğan labelled the killing of Khashoggi as a "political murder," while urging Saudi authorities to bring all those involved "from the person who gave the order to those who carried it out" to account.

"To blame such an incident on a handful of security and intelligence members would not satisfy us or the international community," he added.

The president said King Salman bin Abdulaziz Al Saud told him in a recent phone conversation held on Oct. 14 that 18 individuals suspected of involvement in the incidents were detained in Saudi Arabia.

"After accepting the murder, I was told [by King Salman] that 18 people have been detained. We also see that the names of those on the [Saudi] list also match the suspects identified by our police and intelligence units," Erdoğan said.

Later in the day, Erdoğan also spoke to Khashoggi's family over the phone to offer his condolences. Presidential sources said Erdoğan said Turkey will follow up with the developments regarding Khashoggi's murder and take all necessary steps to shed light on the matter.

SUSPECTS SHOULD STAND TRIAL IN ISTANBUL

Erdoğan also proposed that the 18 Saudis involved in the incident should be extradited to Istanbul to face trial.

"In fact I'm making a call here today. My call is to the top administration of Saudi Arabia, starting with the king,

the 'Custodian of the Two Holy Cities.' The location where the event happened is Istanbul. Therefore, I am proposing that the trial for the 18 arrested people - 15 plus three - should take place in Istanbul. The decision is theirs but this is my proposal, my demand, because this is where the event took place."

He said the investigation is being carried out within the rules of international law, including the Vienna convention, which gives immunity to consulate properties, however, he added, "This murder may have taken place inside a consulate bu

ilding that is considered Saudi Arabian land but it cannot be forgotten that this is within the Turkish Republic's borders."

"According to the Vienna agreement - which was debated - they have diplomatic immunity. [EU Foreign Policy Chief Federica] Mogherini had some comments on this the other day as well, and I believe the Vienna agreement will most likely be put on the table," the president also highlighted. On Tuesday, Saudi Arabia's foreign minister was quoted by The Associated Press as saying, "The investigation is thorough and complete and that the truth is revealed and that those responsible will be held to account." Erdoğan had also said he had no doubts on King Salman's "sincerity" and sensitivity regarding his approach to the matter.

ANSWERS DEMANDED TO SHED LIGHT ON SHADY CHAIN OF EVENTS

Erdoğan put forward several questions that he said needed to be answered by Saudi Arabia to bring some clarity to the chain of events in Khashoggi's murder.

"Why did these 15 people, all with links to the event, gather in Istanbul on the day of the murder?" Erdoğan asked.

He was talking about two groups of Saudi nationals who arrived in Istanbul shortly before Khashoggi's death and are suspected of being involved in the incident.

Erdoğan's speech coincided with Saudi Arabia's Future Investment Initiative forum, which has been described as "Davos in the Desert."

Saudi Crown Prince Mohammad bin Salman, also known widely as MBS, reportedly canceled his talk at the forum. "Who did these people get their orders from to go there?" Erdoğan further inquired.

"When it is evident that a murder took place, why were there so many inconsistent statements made? Why is the body of a person who was officially acknowledged as killed still not around?" he questioned. "[Regarding] the statement that the body was given to a 'local' collaborator, and that statement was made by an official, I am now asking, who is this local collaborator?"

"Since this is a political murder, if there are any partners in crime in other countries, they also need to be included in the investigation," he also asked.

Timeline of chain of events in Khashoggi case

Sept. 28: Jamal Khashoggi visits Saudi consulate in Istanbul at 11:50 a.m. for the first time to apply for some official papers regarding his upcoming marriage.

Oct.1: A [Saudi] group that consists of three people comes to Istanbul at 4.30 p.m. and visits the Saudi consulate.

Oct. 2: at 01:45 a.m, a second three-man team again arrives in Istanbul in a commercial flight and goes to a hotel. A third 9-person team, including generals, arrives via private jet and goes to a different hotel. In total, a team made up of 15 people arrived separately between 09:50 and 11:00 to meet at the consulate. Khashoggi enters the Saudi consulate to deal with paperwork required to marry his Turkish fiancée at 1:08 pm.

Oct. 4: Saudi authorities insist Khashoggi went missing after he left the consulate building. The Turkish Foreign Ministry summons the Saudi ambassador to Ankara over the disappearance.

Oct. 9: U.S. President Donald Trump says he is "concerned" over Khashoggi's disappearance. US Secretary of State Mike Pompeo calls on Saudi Arabia to conduct a "thorough investigation" into the case.

Oct. 11: A Saudi team arrives in Ankara for talks with Turkish officials on the Khashoggi case as the kingdom comes under increasing international pressure to explain what happened to the journalist.

Oct. 15: Turkish forensic investigators enter the Saudi consulate in Istanbul in search of evidence for the journalist's disappearance.

Oct. 20: Saudi Arabia acknowledges Khashoggi's death, saying he was killed in a "fistfight" inside its consulate in Istanbul. Salman sacks several intelligence officials and a royal court adviser who is close to the crown prince in connection with the Khashoggi case.