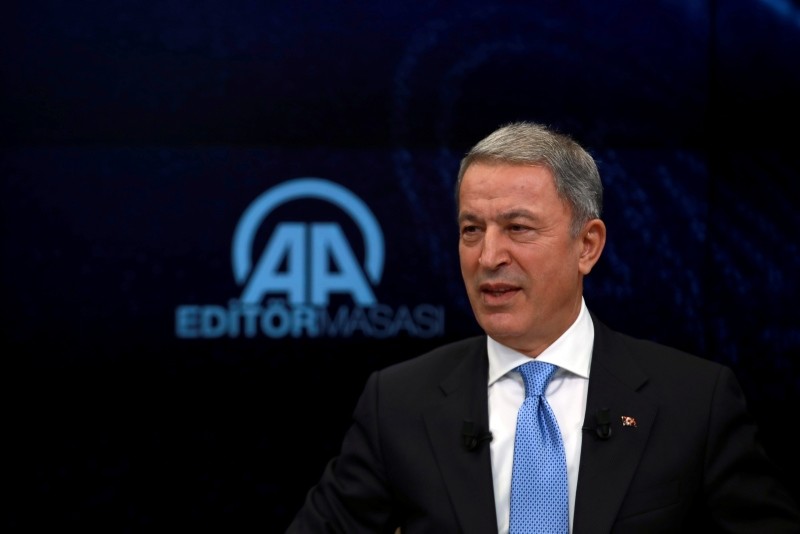 Defense Minister Hulusi Akar said Wednesday that Turkey will not tolerate any Greek fait-accompli in the Aegean or Mediterranean, and will not allow any Greek intervention on Turkish exploration works in the Eastern Mediterranean.

Speaking to Anadolu Agency's Editor's Desk, Akar reiterated that there can be no viable project in the Aegean and Mediterranean without Turkey and Turkish Cypriots.

"Our warships in the region are providing the necessary protection. We will never allow a new harassment."

Akar's remarks came after Turkey warned Greece against taking actions in the Mediterranean Sea that would "spark tensions" in the region.

On Thursday last week, a Greek frigate trying to interfere with Barbaros Hayreddin Paşa, a Turkish seismic vessel working in the eastern Mediterranean, was blocked by the Turkish navy.

The activity, which had been announced by Turkish authorities, met with Greek interference, according to military sources.

The incident prompted an immediate response from Turkish officials, who warned Greece against taking actions in the Mediterranean Sea that would spark tensions in the region.

Turkey has consistently contested the Greek Cypriot administration's unilateral drilling activity in the Eastern Mediterranean, saying Turkish Cypriots also have rights to the resources in the area.

Energy explorations in the region and dispute over Greece's maritime borders have revived tensions between the two NATO allies, who are separated by the Aegean Sea.

Turkey, Greece, the Greek Cypriot and the Turkish Cypriot governments have overlapping claims of jurisdiction for offshore oil and gas research in the Eastern Mediterranean.

Barbaros Hayreddin Paşa will continue to carry out further exploration within the protective circle of the Naval Forces, according to diplomatic sources.

As part of agreements signed between the Turkish Republic of Northern Cyprus (TRNC) and Turkey, the vessel began work in the already declared research field of Morphou in the Eastern Mediterranean.

The Turkish vessel was carrying out research activity, as previously announced, on the Turkish continental shelf of the Güzelyurt Research Coast off the Republic of Northern Cyprus.

It also warned Greece on Tuesday that it would not tolerate a shift in Greece's maritime border, drawing a sharp rebuke from Athens that it would decide when and how to exercise its sovereign rights.

Defense Minister Akar said that Turkey will take necessary measures if a decision is taken contrary to its rights and interests in the Aegean Sea.

"We are in favor of settling matters through peace and negotiations, without turning it into a close conflict in any way," he added.

The move came after recent remarks by Nikos Kotzias, who recently resigned as the Greek foreign minister.

Kotzias has said that Greece was ready to extend its territorial waters from six miles to 12 miles in the Ionian Sea. However, last week Kotzias resigned from his post and Prime Minister Alexis Tsipras took over the duties of the foreign ministry.

The Greek state-run news agency AMNA said yesterday that the Tsipras has decided to skip the option of presidential decrees and seek approval of the parliament to ensure broader political consent on the extension of Greece's territorial waters.

According to the original plans, as revealed by former Foreign Minister Nikos Kotzias, the extension would take place through presidential decrees. But Tsipras seems to be targeting a broader political consensus and therefore will take the issue to the parliament with the relevant legislation.