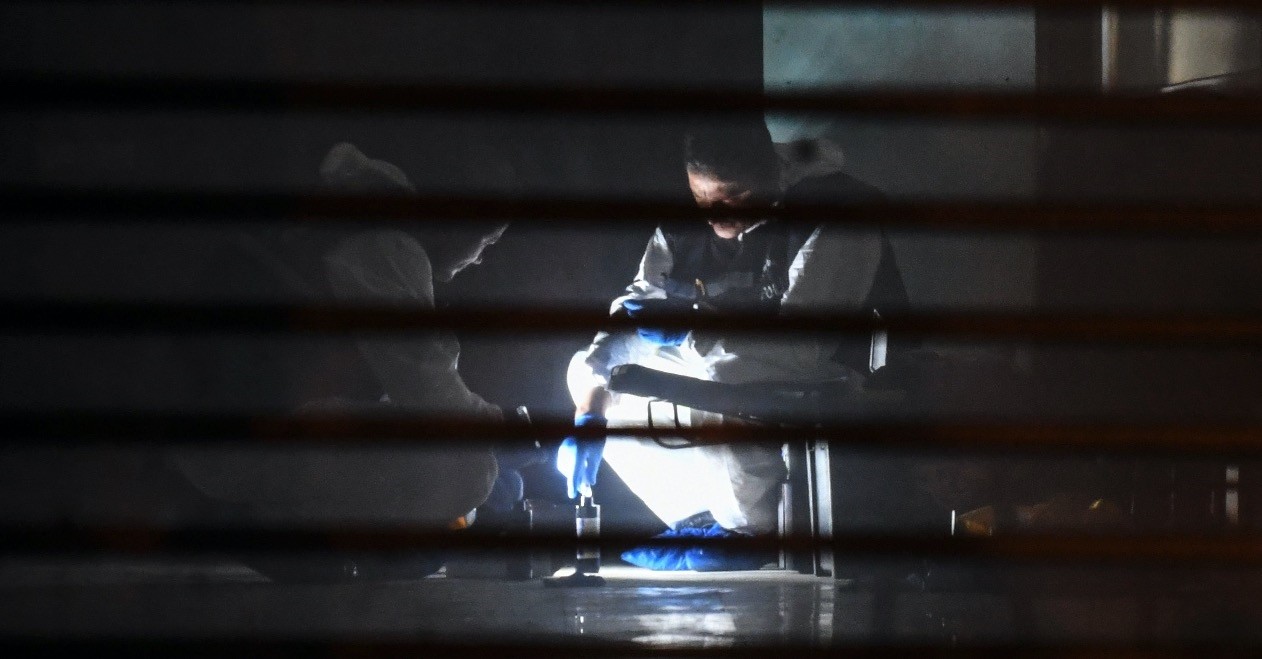 A Turkish forensic team searches for evidence at the garage of Saudi Arabiau2019s Consul General Mohammad al-Otaibiu2019 residence in Istanbul, Oct. 17.
by Daily Sabah Nov 07, 2018 12:00 am

Çavuşoğlu also underlined that Saudi Arabia has the responsibility to reveal the truth behind the murder. "Of course we have evidence at hand and we have already shared some of it with the public. We also have some evidence, which we have not shared with the public, but we have shared with the countries involved in the case. We will share all the evidence with the public when we are fully certain on the results that evidence has led us to," Çavuşoğlu said.

Khashoggi went missing after entering the Saudi Consulate in Istanbul on Oct. 2. After initially saying Khashoggi had left the consulate alive, the Saudi administration admitted weeks later he had died there. Revealing the details of the murder for the first time, Istanbul Chief Public Prosecutor İrfan Fidan announced last week in a statement, "In accordance with plans made in advance, the victim, Jamal Khashoggi, was strangled to death immediately after entering the Consulate General of Saudi Arabia in Istanbul on Oct. 2, 2018 for marriage formalities."

"The victim's body was dismembered and destroyed following his death by suffocation - again, in line with advance plans," the statement added.

Çavuşoğlu questioned the motivations and the possible decision-making suspect, saying the 15-member Saudi team, who are believed to be involved in the killing, must have been acting on orders.

"I think it is Saudi Arabia's responsibility to find out what happened to Khashoggi's body and inform us about it, as the 15-man team is still in Saudi Arabia," Çavuşoğlu said, speaking to reporters in Tokyo, where he is paying an official visit to Japan.

Çavuşoğlu also underlined that there is some further evidence that Turkey has yet to share with the public and added that it will be shared following the investigation.

On the same day that Khashoggi disappeared, 15 Saudis, many of them Saudi intelligence operatives, arrived in Istanbul and visited the consulate when the journalist was inside. Three others arrived a day before the incident. All of these individuals have since left Turkey and were later arrested by Saudi authorities.

"This 15-man team did not come to Turkey on their own, they came on orders. Without due orders and permissions, 15 people cannot come from Saudi Arabia to kill one of their own citizens," Çavuşoğlu stated.

Previously President Recep Tayyip Erdoğan underscored that Saudi officials need to say who gave the instructions to the Saudi team. Çavuşoğlu said that Erdoğan had spoken to Saudi Arabia's King Salman twice after the killing, and that he was sure the king would not give orders to kill someone.

While there are questions on whether Saudi Arabia will hold the suspects accountable, international criticism has been mounting on Saudi officials as they have failed to provide information about the remains of the slain journalist and those abetting the murder.

"Not only the killers, but also those who ordered the killing of Saudi journalist Khashoggi should be punished," German Foreign Minister Heiko Maas stated yesterday.

Meanwhile, the international community continues to demand answers from Riyadh with regards to the Khashoggi murder case. In a phone call on Monday, British Prime Minister Theresa May and her Canadian counterpart Justin Trudeau discussed the killing of Khashoggi, both agreed that "there was an urgent need to establish what happened and for those responsible to be held to account."

The British government's statement also added that May and Trudeau agreed that the international community needs to continue to press for a "thorough, credible and transparent investigation by the Kingdom of Saudi Arabia."

Speaking to Anadolu Agency (AA) EU spokeswoman Maja Kocijancic also called on Saudi Arabia yesterday to fully cooperate with Turkey and bring all those responsible to justice. She stressed that since the beginning the EU has been calling on Saudi Arabia for a fair and transparent investigation.

After revising previous statements that Khashoggi was killed accidentally in a fistfight, Saudi authorities, in the face of global pressures on Riyadh, ultimately admitted that Khashoggi's murder was premeditated.

In a session on Saudi Arabia's human rights review on Monday, Bandar bin Mohammed al-Aiban, the president of Saudi Arabia's Human Rights Commission told the U.N. Human Rights Council (UNHRC) that the Saudi King Salman had instructed the public prosecutor to "investigate the case according to applicable laws and to bring the perpetrators to justice."

Saudi Arabia also said that it is investigating Khashoggi's death with a view to bringing the perpetrators to justice.

The U.S. representative to the UNHRC condemned Monday the "premeditated killing" of Khashoggi and said a thorough and transparent investigation was essential during a session reviewing Riyadh's human rights record.

While the international community has turned to Saudi Arabia as it waits for answers on the murder and fixed its eyes on the Saudi Consulate in Istanbul, the consulate is reportedly undergoing a makeover as many flowers and plants were brought to the premises yesterday, drawing more attention to the incidents within the consulate.