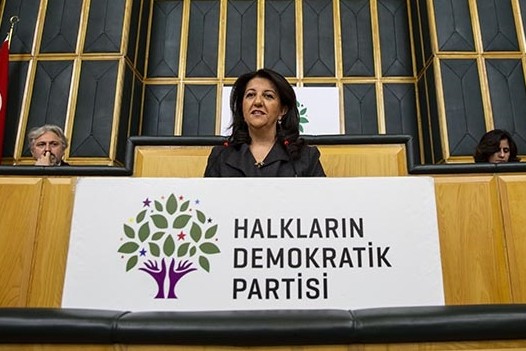 The Ankara Office of the Chief Public Prosecutor has organized a dossier detailing charges of "making propaganda for a terrorist group" against the Peoples' Democratic Party (HDP) Co-chair Pervin Buldan and three party deputies.

The list of crimes include Buldan's speech given on June 21 in southeastern Siirt province in which she encouraged all HDP deputies to attend the funerals of killed PKK terrorists.

Diyarbakır Deputy Imam Taşçıer's social media posts shared on May 24 and the speeches he made in his home province in southeast Turkey on Sept. 8-9 were also included in the list.

Speeches made on March 21 at Nevruz festivals by Tunceli Deputy Alican Önlü and Ağrı Deputy Berdan Öztürk in their home provinces were also recorded in the dossier.

The dossier was sent to the Justice Ministry to be forwarded to Parliament for the removal of immunity of the four HDP deputies.

In June, Buldan insisted on attending and encouraged other party deputies to attend the funerals of PKK terrorists killed by Turkish security forces during a speech in Cumhuriyet Square in Siirt.

Commenting on the controversial attendance of four HDP deputies at various funerals held for killed PKK terrorists, Buldan said it was the duty of each and every HDP deputy to be present at the funerals.

Since the summer of 2015 when the PKK broke a ceasefire with the Turkish state unilaterally, the HDP has failed to put distance between itself and the PKK, abstaining from condemning the acts of the terrorist group against Turkish security forces and civilians.

Since the PKK – which is considered a terrorist organization by the U.S., EU and Turkey – resumed its armed campaign against Turkey in July 2015, it has been responsible for the deaths of more than 1,200 Turkish security personnel and civilians, including a number of women and children.

One of the most startling actions of the HDP in recent years was the attendance of then HDP Deputy Tuba Hezer at the funeral of a suicide bomber who killed dozens of civilians in the capital city of Ankara. Hezer attended the funeral and was a pallbearer for a terrorist who perpetrated the Ankara car bombing on Feb. 17, 2016, which killed 28 people, mostly civilians, and wounded 61.

So far, 13 HDP lawmakers have been arrested, and 10, including former HDP co-chairs Selahattin Demirtaş and Figen Yüksekdağ, remain in detention awaiting trial on charges related to being members or leaders of and committing crimes for the PKK.