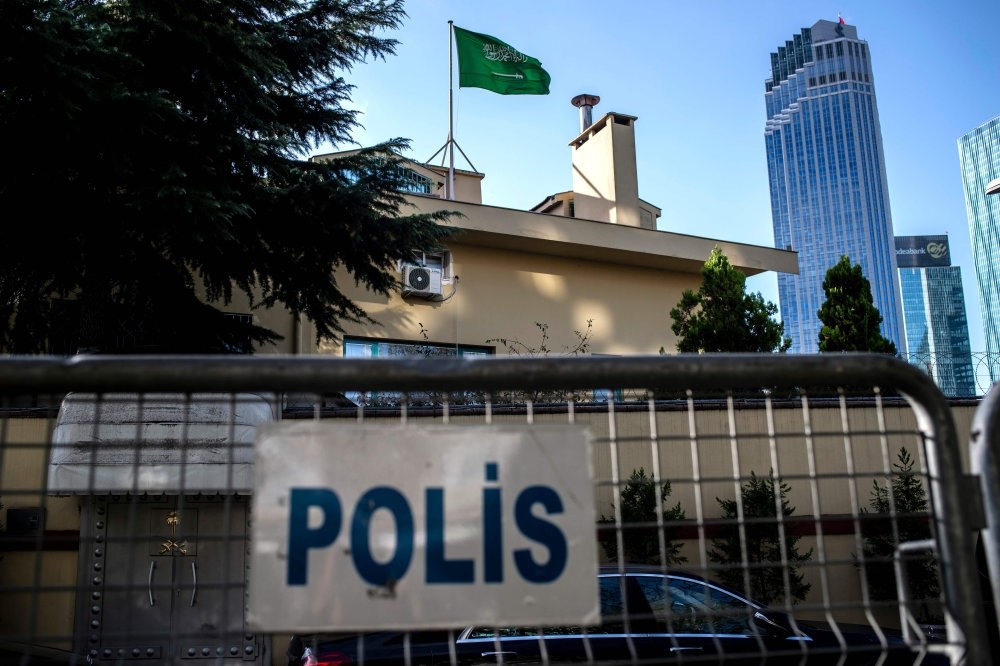 A general view of the Saudi Arabian Consulate in Istanbul on Oct. 7, where Jamal Khashoggi was strangled to death on Oct. 2.
by Daily Sabah Nov 14, 2018 12:00 am

The killer of Jamal Khashoggi reportedly called his superior and told him to tell "the boss" the mission was accomplished shortly after the journalist was killed in Saudi consulate on Oct. 2

The killer of Saudi dissident journalist Jamal Khashoggi reportedly called a superior, saying "tell your boss," who media reports suggest was Saudi Crown Prince Mohammed bin Salman, also widely known as MBS, to confirm that the "mission was carried out" and the "deed is done." "A member of the kill team instructed a superior over the phone to 'tell your boss,' believed to be Crown Prince Mohammed bin Salman, that the operatives had carried out their mission," The New York Times said in an article on Monday, according to the "three people familiar with an audio recording of Mr. Khashoggi's killing collected by Turkish intelligence."

The report stated that Maher Abdulaziz Mutreb, one of the 15 Saudis in the "hit squad" sent to Istanbul to confront Khashoggi, made the telephone call and spoke in Arabic. He was believed to be speaking to one of the crown prince's aides and is claimed to have said the "deed is done." "While the prince was not mentioned by name, American intelligence officials believe 'boss' was a reference to Prince Mohammed," The New York Times reported. Khashoggi, a Saudi national and columnist for The Washington Post who is known for being a critic of MBS, was killed on Oct. 2 inside the Saudi Consulate in Istanbul.

After weeks of denying involvement, the kingdom admitted Khashoggi had been killed at the consulate. Yet, the Saudi government claimed the Saudi royal family had no prior knowledge of a plot to murder the journalist. In connection with the murder, 18 people, including security officers, have been arrested in Saudi Arabia.

This is not the first time that claims have surfaced that MBS was the man behind the brutal murder. On Nov.4, The Wall Street Journal reported that Saud al-Qahtani, known for his work for the crown prince as a social media adviser responsible for the smear campaign against dissidents, was both the planner and director of the killing. According to The Wall Street Journal, Qahtani is now under criminal investigation and was fired from his job as a media adviser.

The article also reported that Qahtani first tried to convince Khashoggi to return to Riyadh but when he failed, he planned the murder. The article questions whether or not the crown prince was aware of the plot since Qahtani was known as his "right-hand."

Meanwhile, Sabah newspaper revealed yesterday that some members of the alleged hit squad were carrying in their luggage 10 phones, five radios, an intercom jammer, two large size syringes and two electroshock devices. It was also reported that the police did not see any body parts in the X-rays.

The case has brought near unprecedented international scrutiny on Saudi Arabia and its powerful crown prince, whom Khashoggi had openly criticized. Officials in Turkey have repeatedly called on the Saudi government to take responsibility and to hold those responsible of the murder accountable. President Recep Tayyip Erdoğan said on Monday that Saudi Arabia knows that the killer is among the group of 15 people who arrived in Turkey a day ahead of the killing.

Erdoğan also said that he discussed the Khashoggi murder with the U.S. President Donald Trump, German Chancellor Angela Merkel and French President Emmanuel Macron in a dinner and told them it was obvious that Khashoggi's murder was ordered and instructed by the high echelons of the Saudi hierarchy.

"As I've mentioned in my article [in The Washington Post], I could not have such [accusatory] thoughts toward King Salman, whom I greatly respect, but we want that the person who gave the order to be revealed," he said.

Regarding the murder, Turkey has been also sharing information with other countries in order to increase efforts to uncover the details of the murder. On Monday, President Recep Tayyip Erdoğan stressed that the audio recording of the moments Khashoggi was killed was given to Saudi Arabia, the U.S., France, Canada, Germany and the U.K.

Canadian Prime Minister Justin Trudeau was first to confirm that an audio recording of the murder was passed to intelligence agencies. Merkel's spokesman also confirmed that they have received information from Turkey.

"I can tell you that there has been an exchange of intelligence service information on that," Steffen Seibert said on Monday.

The latest move of international community to pressure Saudi Arabia, on the other hand, came on Monday from the U.K. The British Foreign Secretary Jeremy Hunt met with King Salman, MBS and Foreign Minister Adel al-Jubeir on Monday in Riyadh regarding the issue.

Commenting on the visit, British Prime Minister Theresa May said on Monday, "As the foreign secretary made clear again in his visit to Riyadh today, there must be a transparent and credible investigation and those responsible must be held to account."

She underscored that, "As we seek to protect and advance our common security, it is vital that we and our partners in the international community demonstrate our common adherence to the rule of law." Prior to the visit, the British government said Hunt "will call on the Saudi authorities to do more to deliver justice and accountability for the Khashoggi family."

"It is clearly unacceptable that the full circumstances behind his murder still remain unclear. We encourage the Saudi authorities to cooperate fully with the Turkish investigation into his death, so that we deliver justice for his family and the watching world," Hunt said.