Merkel leaving German politics because of her conscientious appearance in Europe: Turkish professor 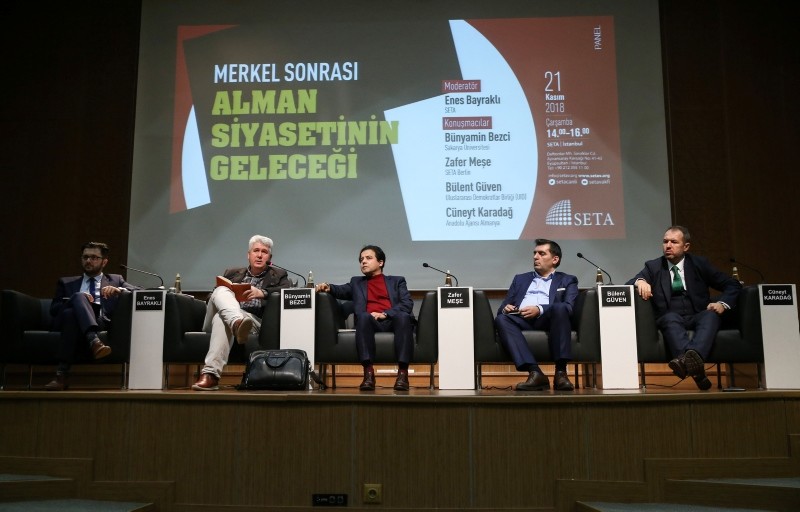 What makes Merkel a strong political figure in German politics and the world is that she is 'Europe's conscience', and she makes policies based on ethics, a Turkish professor has said.

Speaking at a panel titled "The Future of German Politics after Merkel" organized by the Foundation for Political, Economic and Social Studies (SETA) and moderated by Enes Bayraklı, Director of the European Studies Department at SETA on Wednesday, Associate Professor of Political Sciences at Sakarya University Bünyamin Bezci said there had been significant structural changes in German politics after 2008, and this change stemmed from the extreme right-wing discourse across Europe.

Arguing that the structural changes witnessed in European politics, which also affected Germany, caused the departure of German Chancellor Angela Merkel, Bezci said these changes, the reflections of which can be seen across whole Europe, were at the forefront in Germany.

"I think that Merkel having to go is one of the dimensions of this policy."

SETA's Berlin Coordinator Zafer Meşe said that German politics were going through a serious transformation and Merkel had left the political scene by making an ingenious move in this transformation process.

After Merkel, a problematic period for Turkish people living in Germany could begin, Meşe warned, saying: "After Merkel, Turkish NGOs in Germany will have serious duties. We need to work more closely with German NGOs on combating extremist racism because there is no other choice. As Turkish NGOs, we need to go a long way in Germany. We at least need to find ways to act [in unison] with them."

Politics in Germany heading towards instability

Stressing that there is a serious fear of Islam in Germany, the Union of International Democrats (UID) Board Member Bülent Güven said: "There is a serious fear, especially in Germany, of the current Muslim population and the ongoing migration. There is serious concern among Germans that German culture will just melt away. The right-wing rhetoric, which is rapidly rising in Germany, is not only an economic response but also an identity response. Germany and Europe are facing three challenges today: The first is a challenge about immigration and the second is digitalization. The third one is the environmental problem. Thus, Europe faces different challenges and the current center-right and center-left parties are unable to respond to these challenges."

Cüneyt Karadağ, a representative of Anadolu Agency in Germany, explained that there was serious uncertainty and a process of 'shedding skin' in German politics.

Claiming that the uncertainty in German politics was caused by U.S. President Donald Trump's lack of pleasure in Merkel's approaches, Karadağ stressed that Germany could take positive decisions to get rid of the tensions between the U.S. and Russia.

Pointing to increasing nationalism in Europe, Karadağ said that this was a general problem in Europe and it naturally affected German politics.

Karadağ added that it will take a long time to get out of this vicious cycle in German politics.

"I have an expression for Merkel: 'The right prime minister at the wrong party'. Merkel is a physicist who grew up in East Germany, and has a skeptical approach. Because she grew up in an authoritarian regime, she has this style of being skeptical, abstaining from and being unable to show her true face. Merkel defeated all her rivals in the arena as a pragmatist and rational politician. In spite of this, Merkel's decision not to run in the elections is, in fact, a result of her thinking about the state. So, she decided to make this move. It led to a new leader, because if Merkel had entered congress in December, she would have won. Maybe she wouldn't get 100 percent of the votes, but surely 65 to 70 percent."