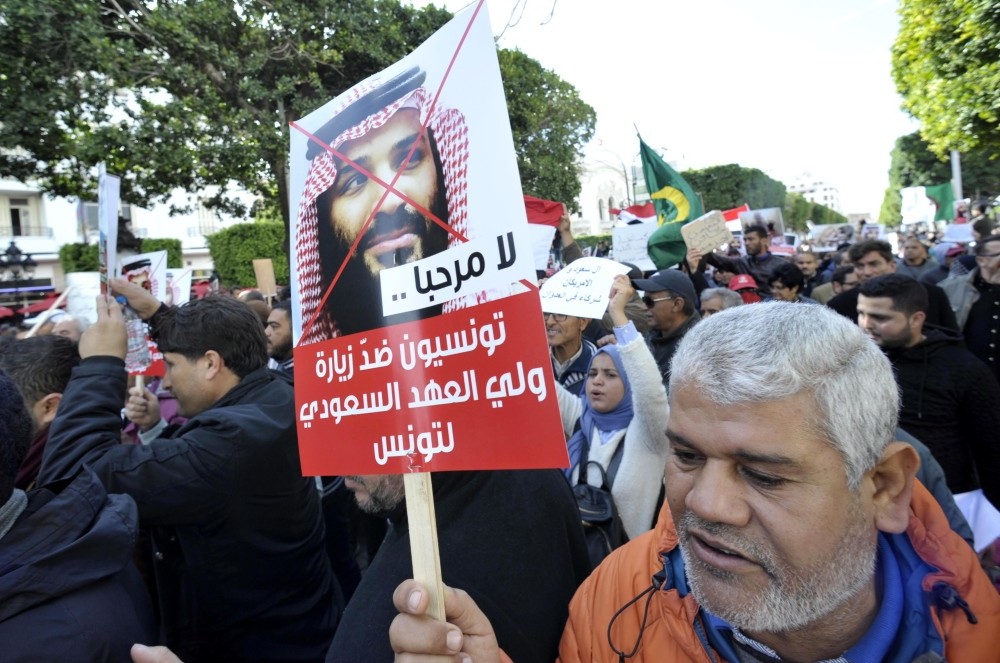 Tunisian protesters holding placards in Arabic that read ,Tunisians against the Saudi crown prince's visit,, shout slogans during a demonstration in Tunis, Nov. 27.
by Yusuf Selman İnanç Nov 29, 2018 12:00 am

Mohammed bin Salman, who is under fire over the killing of Jamal Khashoggi and the war in Yemen, is looking for the support of Arab governments; yet his vision for the region, which assigns a primary role to Israel, is disturbing for the Arab people

Saudi Arabia's Crown Prince Mohammed bin Salman (MBS) arrived in Tunisia on Monday to hold talks with top Tunisian officials to improve bilateral relations. Yet, the main driving force behind the visit was that MBS has been looking for support from the Arab world after his country came under fire due to the murder of Saudi journalist Jamal Khashoggi in the Saudi Consulate in Istanbul last month.

MBS's arrival in Tunisia was turbulent as thousands of people staged protests against him over the murder as well as the ongoing war in Yemen, considered a notorious tragedy by the people in the region. Moreover, several complaints were filed against MBS, knowing that there would be no action - just to show displeasure with his visit.

Tunisia, one of the smallest and most secular countries in the Middle East and North Africa was where the first flames of the Arab Spring burned in 2010 after a street vendor set himself on fire to protest the economic situation. Following the protests in this tiny country, Egypt, Libya, Yemen and Syria witnessed mass protests. The last three countries were dragged into civil wars along with the participation of several regional and international forces, shadowing the peoples' desires.

Although Saudi Arabia was involved actively only in Yemen, Tunisians were furious because from the outset Saudi Arabia had been struggling to undermine revolutions across the Arab world, fearing that its suppressed population would come up with a similar desire. Riyadh's involvement in Egypt to topple the country's first freely elected president, Mohammed Morsi, under the pretext that the Muslim Brotherhood, to which Morsi was inclined, was a terror organization.

Then, there was the Yemen case where Iran-aligned Shiite Houthi rebels challenged the established government. Saudi Arabia created an international coalition, consisting of the Gulf countries except Qatar, to suppress the group. Moreover, there are claims or rumors that Saudi Arabia had intentionally backed some radical groups in Syria, not to help topple Bashar Assad, but to deadlock the country. Tunisians were aware of these facts or at least had heard these claims.

Another striking policy, recently adopted by Riyadh with encouragement from MBS, is an implicit alliance with Israel. Relations with Israel or even this topic itself are the most sensitive issues in the Muslim world. Not just Islamists and conservatives, all Arabs would oppose an alliance with that country. However, as part of MBS's new Middle East vision, there is a place for Israel as an ally of the Gulf. It is not coincidental that both MBS and Israel oppose Iran's expanding power as well as the presence of the Muslim Brotherhood. Although the latter has largely been ineffective and its affiliated group, Nahda, lost the leadership in the country in the last elections, Tunisians are unhappy with MBS's plans that place Israel at the center. On the other side, MBS has been looking for support from the Arab world similar to what he has found from Israel. Tunisia was not a randomly selected country as it suffers from economic difficulties and is in dire need of financial aid. Therefore, MBS and his administration are aware that Tunisia is not in a position to oppose Riyadh's offers. However, the scene is reminiscent of pre-Arab Spring Tunisia where the desires of the people and the government were in opposition.