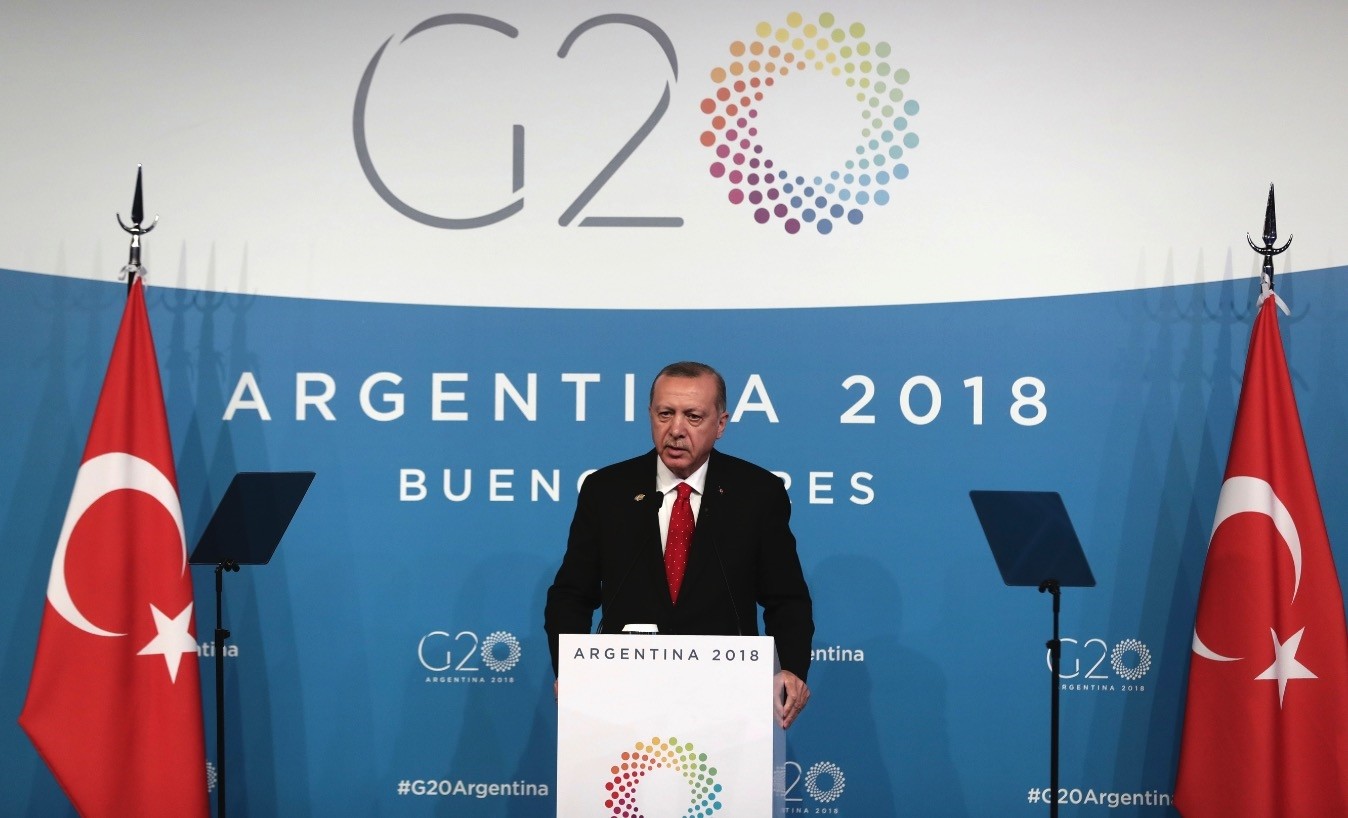 At a news conference on the final day of the G20 summit in Argentina on Saturday, President Erdou011fan made remarks about the Khashoggi murder, the Syria crisis, defending rights in the Eastern Mediterranean and more.
by Nur Özkan Erbay Dec 03, 2018 12:00 am

Speaking to reporters during the G20 summit in Argentina, President Erdoğan called on Saudi Arabia to be clearer and more open on the Khashoggi murder case and accused the country of evading the issue

President Recep Tayyip Erdoğan called on the Saudi government to reveal all aspects of journalist Jamal Khashoggi's murder, including the identity of the person who gave the order for the killing, criticizing the unsatisfying legal process carried out by Saudi prosecutors. "The question that we have been consistent on is 'where is Khashoggi's body?' Your 20-person team knows it. Don't evade this issue. Your foreign minister talked about a local collaborator. Who is this local collaborator that Saudi officials claimed to have collaborated with?" the president told reporters yesterday on his way back from Buenos Aires, where he attended the G20 meeting. He also emphasized the lack of seriousness displayed by the Saudi authorities. During the G20 summit, he is reported to have admonished Crown Prince Mohammed bin Salman for his "unbelievable explanation" on Khashoggi's killing, criticizing the Saudi prosecutor, Saud Al Mojeb, who visited Istanbul for a few days late in October. "Our prosecutor provided him [the Saudi prosecutor] with all the necessary evidence. And he, in turn, took back with him five boxes full of nuts. That's the kind of behavior we are up against."

Khashoggi, a columnist for The Washington Post, was reported missing by his fiancee on Oct. 2 shortly after entering the Saudi Consulate in Istanbul to obtain marriage documents. After initially saying he had left the consulate alive, the Saudi administration admitted weeks later that he was killed there.

The president added that Turkey has been distinguishing its bilateral ties with Saudi Arabia for the Khashoggi case.

"There are two separate things. We want all aspects of the murder to have light shed on them including identity of person who gave the order," he said.

The killing of Khashoggi, a critic of the Crown Prince Mohammed bin Salman, has strained Saudi Arabia's ties with the West and battered the prince's image abroad. Saudi Arabia has said the crown prince, the kingdom's de facto ruler, had no prior knowledge of the murder.

Erdoğan said that Turkey emphasized its support on the continuation of free trade, expressing that unilateral approaches would bring harm more than good to all countries. He added that there is a complete agreement on the matter except for the U.S.

On global commerce, the final statement of the G20 said the 20 countries support multilateral trade, but acknowledged that the current system doesn't work and needs fixing, via "the necessary reform of the WTO to improve its functioning." Stressing that Turkey has been fulfilled its responsibilities and took necessary steps on climate change, Erdoğan said the country needs assistance to finance the progress however. "We could not continue if they would not take us to status of developing countries and provide necessary assistance. As you know, the U.S. refrain to approve the agreement yet," he said. The final statement says that the 19 nations that are signatories of the Paris climate accord reiterate their commitment to it while the U.S. reiterates its decision to withdraw.

It also notes a recent U.N. report that warned that the damage from global warming will be much worse than previously feared, and expresses support for an upcoming U.N. climate meeting in Poland meant to nail down how countries will meet promises made in the Paris accord.

Turkey has spent $33 billion on refugees

Regarding the Syrian refugees in Turkey, Erdoğan said that Turkey spent $33 billion on refugees so far, accusing international community on failing to provide discernible support to the country.

"The EU has not yet fulfilled its promise to provide [the remaining] 3.3 billion euros of aid to refugees. Also, the amount of support coming from the U.N. refugee agency is just a symbolic number," he said.

Turkey and the EU signed an agreement in 2016, to solve Europe's most pressing problem, the influx of refugees to the bloc. The agreement foresees that in exchange for Turkey

stemming the refugee flow to Europe, the EU would pay Turkey 6 billion euros in financial aid to improve the living conditions for Syrian refugees in Turkey. However, the bloc has failed to deliver the amount.

Emphasizing Turkey's position as the most charitable country in the world, the president added that the factors that have been triggering the refugee problem should be eliminated.

With its humanitarian aid expenditures that were nearly 1 percent of its gross domestic product, Turkey was the most charitable nation in 2017, according to the Development Initiative's (DI) Global Humanitarian Assistance Report.

Relations with Russia, China and Japan

Erdoğan stressed that he discussed a range of issues with Russian President Vladimir Putin including the Turkish Stream, the delivery of S-400 defense systems, bilateral trade, lifting of visas and the recent tension in Crimea as well as the situation in Syria.

"We are showing the utmost effort to defuse tensions [between Russia and Ukraine]. They said that a quartet summit with the attendance of Russian, Ukraine, Germany and France will convene," he said. Emphasizing that Ankara and Beijing have been developing bilateral ties as "two strategic partners," Erdoğan said that Chinese President Xi Jinping gave a signal to visit Turkey in 2019.

"I hope that with this visit, the development of our relations will be expedited," he said. The president added that Turkey's economic and cultural with Japan also has been progressing and the two countries will designate 2019 as a mutual year of cultures.

Stressing that Turkey continues to discuss using local currencies in bilateral trade with other countries, Erdoğan said that the process is not quickly processing as Turkey desires but some steps were taken so far.

"Putin is one of most responsive leaders on this issue. We often discuss it with him. This issue is also on his agenda and he sees it as a very significant matter. We want to implement it in our trade with China and Iran too," he said.

Responding to a question on claims of Turkey's possible involvement in BRICS as a replacement for Brazil, where the newly-elected pro-U.S. government reportedly is planning on leaving the bloc, Erdoğan said that the issue came on the agenda during his meeting with Putin and Jinping, and both leaders positively approached the matter.

Trade by BRICS countries, which consists of Brazil, Russia, India, China and South Africa, corresponds to 23 percent of global trade, while the gross domestic production in these countries makes up more than half of global economic growth. The BRICS countries produce one-third of the global industrial products and half of the agricultural produce.

Turkey's trade volume with BRICS countries in 2017 was calculated at $60.7 billion. The country's total exports to the five BRICS members were $7.3 billion, while its imports from these countries hit $53.4 billion.