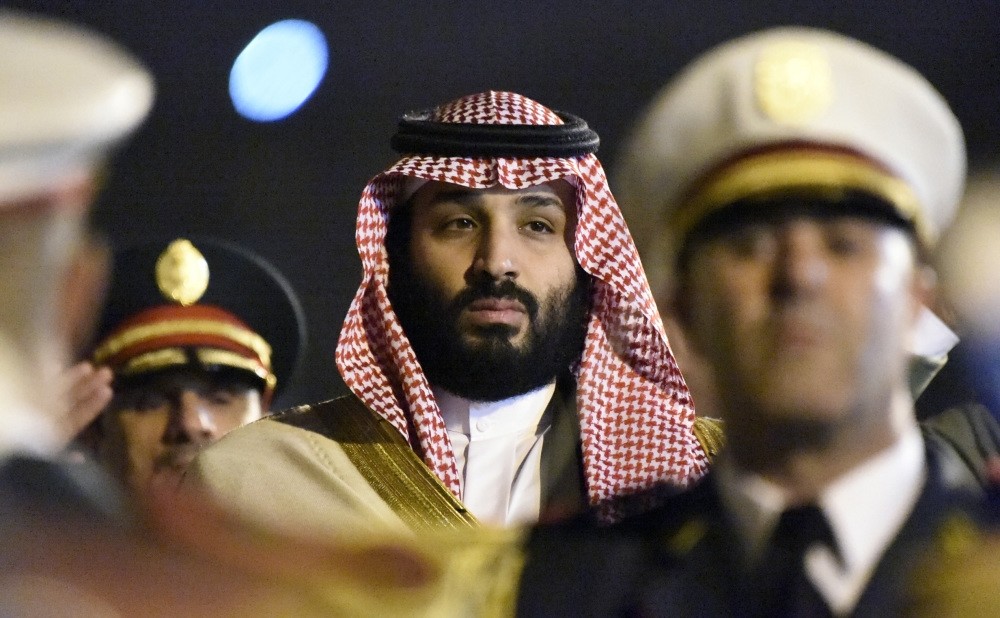 Saudi Crown Prince Mohammed bin Salman is seen behind a military band upon his arrival at Algiers International Airport, southeast of the capital Algiers on Dec. 2.
by Daily Sabah with Agencies Dec 07, 2018 12:00 am

A group of U.S. lawmakers took a step against Saudi Crown Prince Mohammed bin Salman through a resolution that pins the murder of Jamal Khashoggi on him

A group of United States senators on Wednesday introduced a resolution accusing the Saudi Crown Prince Mohammed bin Salman (MBS) of taking part in the murder of dissident Saudi journalist Jamal Khashoggi, who was known as a critic of Riyadh's policies. The resolution is largely symbolic, but it registers the Senate's discomfort with the killing and the response of U.S. President Donald Trump. It's among several measures being considered after a closed-door briefing by CIA director Gina Haspel on Capitol Hill.

Introduced by a top Trump ally, Republican Sen. Lindsey Graham, and by Democratic Sen. Dianne Feinstein, the resolution says the Senate believes MBS "was in control of security forces" during the killing and has "a high level of confidence" that the crown prince was "complicit" in the murder, based on "evidence and analysis made available."

Khashoggi was killed in the kingdom's Istanbul consulate on Oct. 2 by a team of 15 people consisting of Saudi officials who arrived in Turkey for his murder and a cover-up operation, including dismembering Khashoggi's body. All of the identified individuals have since left Turkey. Saudi Arabia has said the prince had no prior knowledge of the murder. After offering numerous contradictory explanations, Riyadh later said Khashoggi had been killed and his body dismembered when negotiations to persuade him to return to Saudi Arabia failed. Saudi authorities launched an investigation against 21 people over the murder, detaining some of the suspects and seeking death penalty for five.

"I believe it's vitally important to U.S. national security interests to make a definitive statement about the brutal murder of an American resident, Mr. Khashoggi, who has three American citizen children," Graham said in a statement. 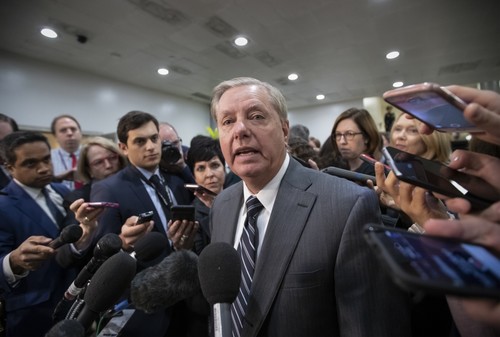 Sen. Lindsey Graham, R-S.C., chairman of the Subcommittee on Crime and Terrorism, speaks to reporters after a closed-door security briefing by CIA Director Gina Haspel on the slaying of Saudi journalist Jamal Khashoggi and the involvement of Saudi Crown Prince Mohammed bin Salman, at the Capitol in Washington, Dec. 4.

The non-binding resolution is also seeking to hold the crown prince accountable for contributing to the humanitarian crisis in Yemen, the blockade of Qatar, the jailing of political dissidents in Riyadh and the use of force to intimidate rivals.

If approved, the resolution would put the Senate on record as saying that the crown prince is responsible for Khashoggi's killing. It would also pressure Trump to decide whether to veto the measure.

The resolution also calls on Saudi Arabia's government to negotiate with representatives of the Houthi rebel group in Yemen and agree to a political resolution and end the country's humanitarian crisis.

Previously, senators leaving the briefing with Haspel on Tuesday said that they are even more convinced that the Saudi crown prince was involved in the death of Khashoggi.

Senate Foreign Relations Committee Chairman Bob Corker, said he believes if the crown prince were put on trial, a jury would find him guilty in "about 30 minutes."

"I have zero question in my mind that the Crown Prince MBS ordered the killing, monitored the killing, knew exactly what was happening and planned it in advance," Corker said to reporters.

U.S. intelligence officials also have concluded before that the crown prince must have at least known of the plot, but Trump has been reluctant to pin the blame. He has touted Saudi arms deals worth billions of dollars to the U.S. and recently thanked Saudi Arabia for plunging oil prices.

Meanwhile, Saudi Ambassador to the United States Khalid bin Salman, the brother of MBS, has returned to Washington after leaving the U.S. capital in the wake of the murder of Khashoggi, an official said Wednesday.

Prince Khalid has denied any involvement of MBS to the murder, and called it a "serious accusation."

The Saudi Foreign Minister Adel al-Jubeir meanwhile was also in Washington on Friday to represent his country at the funeral of former President George H.W. Bush, according to Baeshen.

She did not add whether al-Jubeir would meet with administration officials during his stay.