Turkey to establish medical colleges for locals in Kirkuk, Jarablus 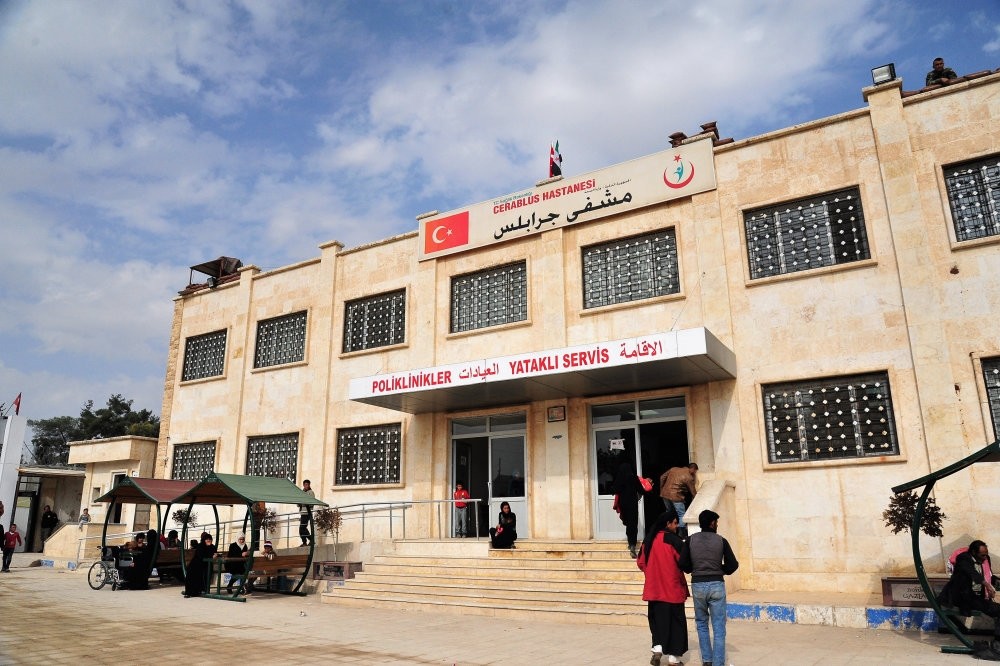 A hospital in Jarablus, northern Syria, built by Turkey after the region was liberated from Daesh terrorists.
by Daily Sabah Dec 08, 2018 12:00 am

Turkey will establish colleges to provide medical education in Kirkuk, northern Iraq, and also in Jarablus, northern Syria, as part of the country's humanitarian efforts south of its borders

The decision, in line with Turkey's policy of providing humanitarian aid across its borders, came in the form of a presidential decree that was published in the Official Gazette Friday.

The rector of Health Sciences University, Cevdet Erdöl, said Friday that the two vocational schools will be opened soon after receiving official permissions. "We have also opened vocational schools in Somalia and Sudan," he said.

Stressing that Turkey will always stand with the people of Syria and Iraq without seeking any interest, Erdöl said, "We will open our vocational schools determining the needs of people in Syria and Iraq in the field of health."

In both schools, students in the region will be trained in nursing and technical education.

As Ankara prioritizes alleviating the suffering of local people, it has been worked to normalize life in Jarablus by supporting healthcare, education and safety services, since the liberation of the city.

In fall 2016, Turkey's Health Ministry opened a hospital for thousands of people in the area.

In addition, the Turkish Red Crescent (Kızılay), the state Disaster and Emergency Management Agency (AFAD), and some Turkish municipalities have repaired local schools, included Ahmet Selim Mulla High School, the city's largest, which was previously used as a prison by Daesh terrorists.

In order to improve the living conditions in Syria, Turkey mobilized state institutions including Kızılay and AFAD. Kızılay has sent more than 42,000 trucks of humanitarian aid supplies to Syria so far - about a hundred tucks of aid daily. As a result of Turkey's political efforts and anti-terrorist operations, more than 200,000 refugees have returned to their homes.

As part of a recent project, local people in northern Syria's Azaz, a town that was liberated from terrorists during Operation Euphrates Shield, have also been receiving vocational training at a public education center established by Turkey.

The center was opened by the National Education Directorate in Turkey's border province of Kilis and opened three months ago. The center includes courses in the Turkish language, hairdressing, graphic design, tailoring, electric and electronics, as well as training on the operation and maintenance of heavy machinery. The public education center currently has some 250 students. Apart from Azaz, Turkey has also opened similar centers in the Syrian towns of Mare, Soran and Akhtarin.

While Turkey put great a emphasis on continuing the fight against terrorist groups in neighboring countries, it does not neglect the increasing needs of local people who have been suffering due to the ongoing conflicts in their countries. Turkey is investing in the Syrian people's future by opening numerous schools to educate children and working places where people make money.

For example, last week Turkey opened a kindergarten and tailor workshop in Khan Shaykhun, a town near the Turkish border in northern Syria's Idlib province.

The Turkish Health Ministry also opened a new health center last week in the town of Raju in Afrin district. It has internal medicine, dentistry, women's and pediatric outpatient clinics, as well as a blood test laboratory and a pharmacy.

Aside from the humanitarian assistance provided for Syria, Turkey pledged $5 billion in loans and investment for the reconstruction of Iraq, a nation reeling from a three-year war against the Daesh terrorist group. Ankara has clearly stressed that it will stand with the people of Iraq, supporting their efforts to rebuild the country.