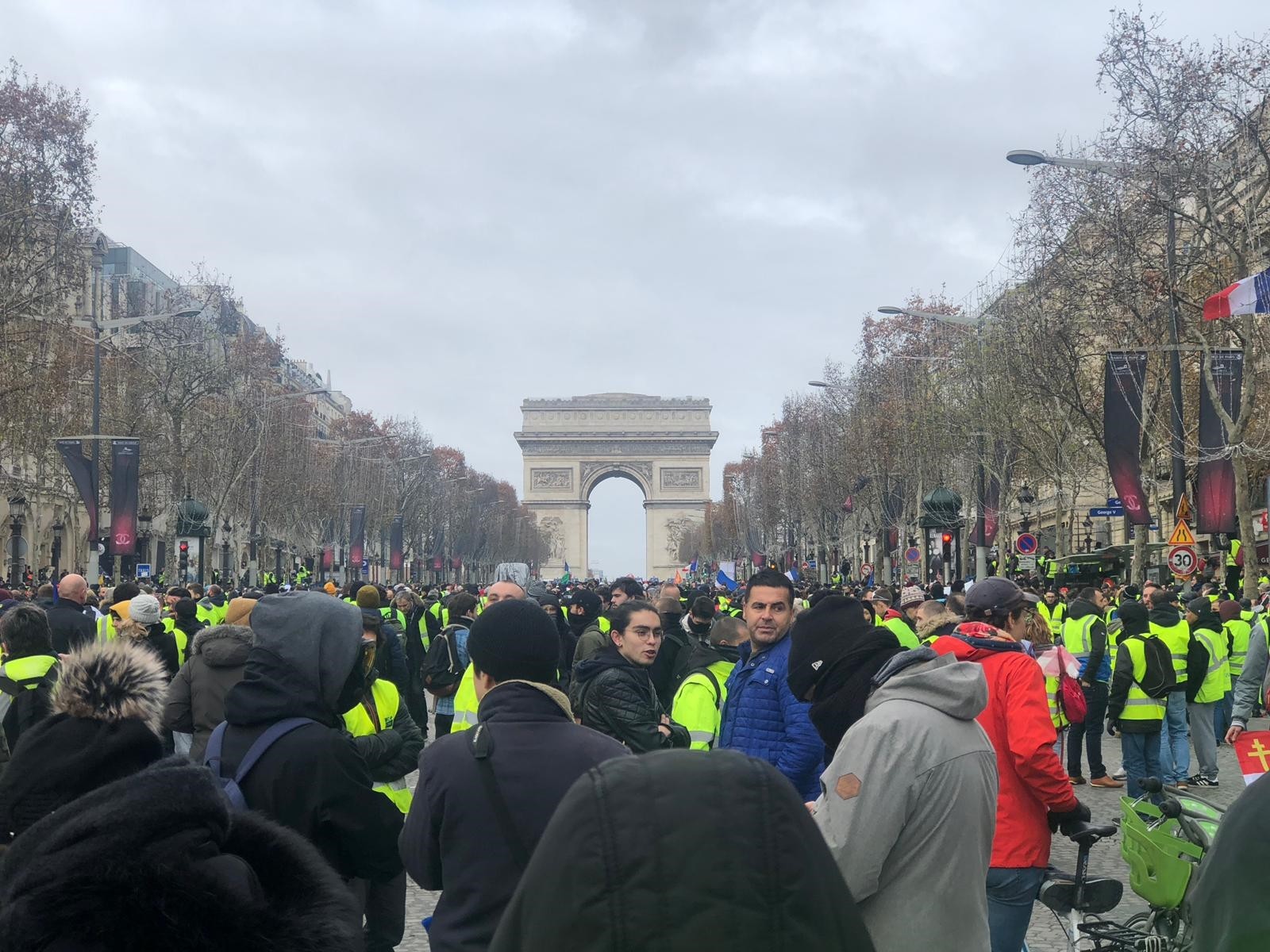 Erdoğan has voiced concerns over rising tensions between protesters and the riot police in the ‘yellow vest' protests across France, saying violence and vandalism should not supersede democratic rights and public order

As France has been engulfed with countrywide riots under the umbrella of the "yellow vest" protests, which have been growing and spilling over to other European countries, Ankara has voiced concern regarding both police violence and protestors' vandalism across the country, mainly in Paris, that cast a shadow on people's democratic rights. "All kinds of demands can be expressed within the scope of democracy. Therefore, we are following incidents on the streets of Europe with concern," President Recep Tayyip Erdoğan said on Saturday during a speech in Istanbul. 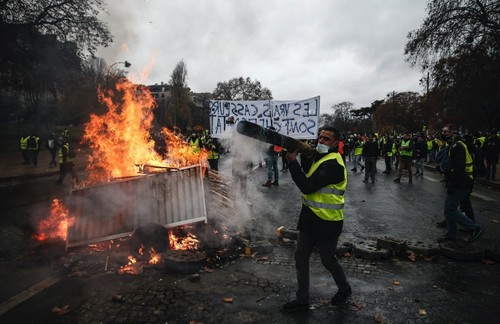 "Europe has failed in the test of human rights and democracy," Erdoğan said as he underlined that Ankara is both against chaos created by some protesters and the disproportional force used against them by the police. Since Nov. 17, thousands of yellow vest protesters have been gathering in major French cities, including Paris, to protest President Emmanuel Macron's controversial fuel tax hikes and the deteriorating economic situation. 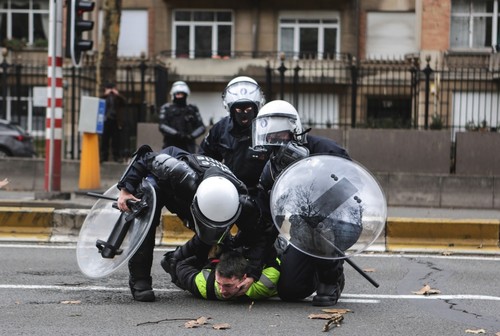 While the Macron government has stepped back from the decision to raise taxes, the protests have not slowed down.

A total of 118 protesters and 17 police officers were injured in Saturday's Yellow Vest protests across France, Interior Minister Christophe Castaner said in a press conference on Saturday. He added that 974 people were arrested during the protests in which about 125,000 people participated. In the face of ongoing protests, France increased security measures ahead of the demonstrations as dozens of armored vehicles and 89,000 police and troops were on duty during the protests. 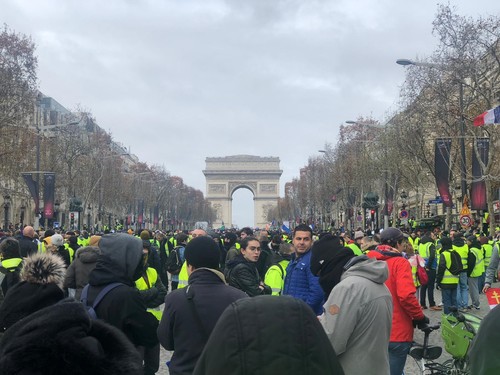 Protesters seen on Champs-Elysees Avenue near the Arc de Triomphe, during a national day of protest by the "yellow vest" movement, Paris, Dec. 8. (Photo by Melih Altınok)

On Sunday afternoon, the French Interior Ministry updated the number of protesters who took part in the nationwide protests to 136,000. According to the ministry, 1,220 people were arrested during the demonstrations. 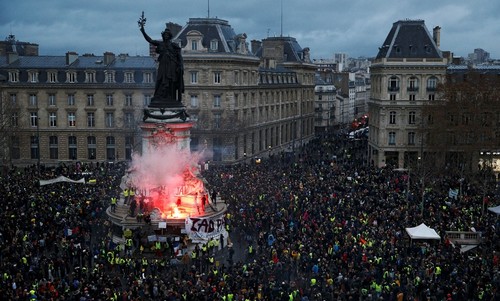 Meanwhile, the damage caused in Paris during Saturday's protests was described as "catastrophic" by the city's municipality officials.

"The violence was less radical, but the damage is probably more serious than a week ago," he was quoted as saying by the German Press Agency (dpa). 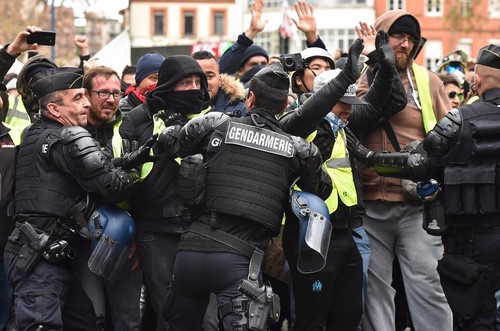 While economic agony ignited the protests in the first place, the participation of sympathizers of various terrorist groups and vandals were observed during the weekend's protests creating chaos and fueling violence. According to a recent survey, 84 percent of the French people - mostly from the middle-income group - support the protests. Fuel prices in France have risen more than 20 percent this year.

During his speech, the Turkish president also pointed out that offshoots of the PKK terrorist group have been attending the protest and pointed to Turkey's previous warnings to French governments about the activities of terrorist groups in the country.

"Sympathizers of the terrorist groups, about whom we have been warning against for years, have been in the front lines in this chaos. Offshoots of the PKK are there," Erdoğan said.

During the recent devaluation of the Turkish lira, caused by U.S.-led economic actions against Turkey, Macron's supportive remarks for the Turkish economy were welcomed by Ankara. Ankara also says Turkey values its ties with European countries and prioritizes political and economic stability across the EU and France in line with the spirit of partnership and alliance.

Meanwhile, a French member of the illegal Turkey Communist Party/Marxist-Leninist (TKP/ML) terrorist group, known for its links with PKK terrorists, expressed support for the yellow vest protests in France in a video posted on social media Saturday.

The video shows three men with covered faces holding arms and TKP/ML flags in their hands while praising the demonstrations against President Emmanuel Macron.

Despite Ankara's highly vocal criticism, the PKK and its sympathizers have been able to conduct campaigns against Turkey, organizing protests, displaying symbols of the terror group and carrying PKK banners in European cities.

Earlier this year relations between Ankara and Paris deteriorated after Macron met with representatives of the People's Protection Units (YPG)-dominated Syrian Democratic Forces (SDF) and offered his support. The YPG is a Syrian affiliate of the PKK, which has been listed as a terrorist group by the EU and the U.S.

Following the incident, Erdoğan criticized his French counterpart for holding meeting with terrorist PKK-linked figures from the SDF, which is led by the PKK's Syrian affiliate, the YPG, warning Macron about the dangers of cooperating with terrorist groups. Ankara strongly stressed that the France's move was not befitting of an ally.

As the regional developments calls for increasing cooperation, Turkey has acknowledged the importance of maintaining dialogue with its European partners, while at the same time it continues to inform them about the dangers of turning a blind eye to terror sympathizers. The quadrilateral summit in Istanbul that saw the participation of Turkish, Russian, French and German leaders to solve the Syrian crisis can be seen as an example of efforts to keep dialogue open in order to solve regional problems.