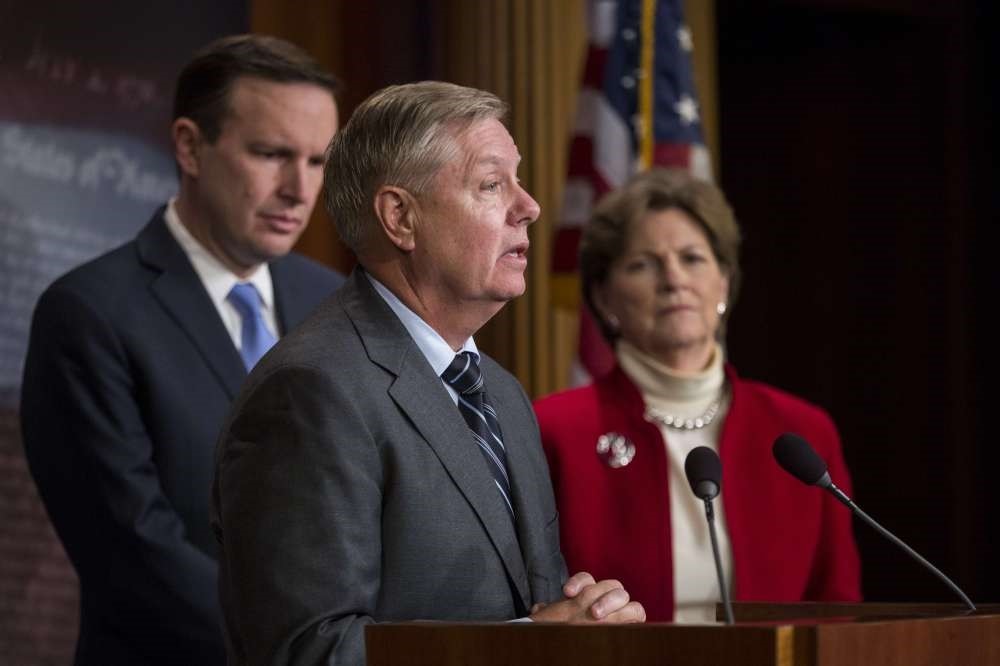 Sen. Lindsey Graham (C) speaks during a news conference about a resolution to end U.S. military support for Saudi Arabia's war with Yemen, Dec. 12, Washington.
by Daily Sabah with Agencies Dec 14, 2018 12:00 am

The U.S. continues to take steps to corner U.S. President Donald Trump and his administration on their uncompromising support for the Saudi crown prince's controversial policies in Yemen and the kingdom's role in the killing of Saudi journalist Jamal Khashoggi

Key U.S. senators have called on Saudi Arabia to replace Crown Prince Mohammed Bin Salman (MBS), accusing him of being "so flawed" and they are also asking for a change in the Yemen policy if Riyadh wants to preserve its close ties with Washington.

"To our friends in Saudi Arabia, you are never going to have a relationship with the United States Senate unless things change. And it's up to you to figure out what that change needs to be," Republican Sen. Lindsey Graham told reporters at a joint presser on Wednesday.

Graham, a well-known ally of U.S. President Donald Trump, said the "current construct is not working" in the kingdom, stressing that they would like to see Riyadh remove the country's de-facto ruler from power.

The Senate is considering submitting a joint resolution this week condemning the crown prince for the murder of a prominent Saudi journalist Jamal Khashoggi at the Saudi Consulate in Istanbul on Oct. 2.

Democrat Sen. Bob Menendez and Graham declared that the new Congress will approve new financial sanctions and suspending arms sales to the kingdom in January due to the killing of Khashoggi and Yemen war.

The kingdom initially denied any role in Khashoggi's disappearance before acknowledging that he was murdered inside the consulate, but passed the buck to rouge agents. However, the explanation has been met with skepticism by many U.S. lawmakers who insist the operation could not have been carried out without the knowledge of the crown prince.

The final vote was expected yesterday to send a firm rebuke to both Saudi Arabia and the Trump administration as the U.S. president has been determined to support MBS, claiming arms and other trade deals with the oil-rich kingdom are too valuable for the U.S.

However, U.S. House Speaker Paul Ryan moved Wednesday to block a resolution on ending U.S. support for the war in Yemen from reaching the House of Representatives for a vote. Ryan inserted a provision into a must-pass farm bill that essentially blocks a vote on any legislation dealing with War Powers resolutions for the remainder of the current Congress' term, which ends on Jan. 3.

As the Khashoggi case has highlighted a growing schism between U.S. lawmakers and Trump, the senators said the legislation will be passed when it comes to a full vote in the Senate, adding that it will send a global message expressing that being an ally of the United States, cannot mean killing someone with impunity.

"There is a relationship between countries and individuals. The individual, the crown prince, is so toxic, so tainted, so flawed that I can't ever see myself doing business in the future with Saudi Arabia unless there is a change there," Graham added despite the Trump's stance on the issue.

The announcement of the bipartisan piece of legislation comes just hours after CIA Director Gina Haspel briefed leaders on Wednesday in the House over what the intelligence agency knows about the Khashoggi murder.

After the CIA briefing, it has been reportedly widely believed that MBS must have at least known about the plot to kill Khashoggi.

"I think that all leaders are responsible for things that happen under them. So I think that we've still got to get to the bottom of it," Engel added. "Saudi Arabia is an important partner, but I don't think we can simply look the other way when things happen and talk about business as usual."

Speaking on the issue, the United States' outgoing U.N. Ambassador, Nikki Haley, also said on Wednesday that the crown prince was "responsible" for the murder of Khashoggi.