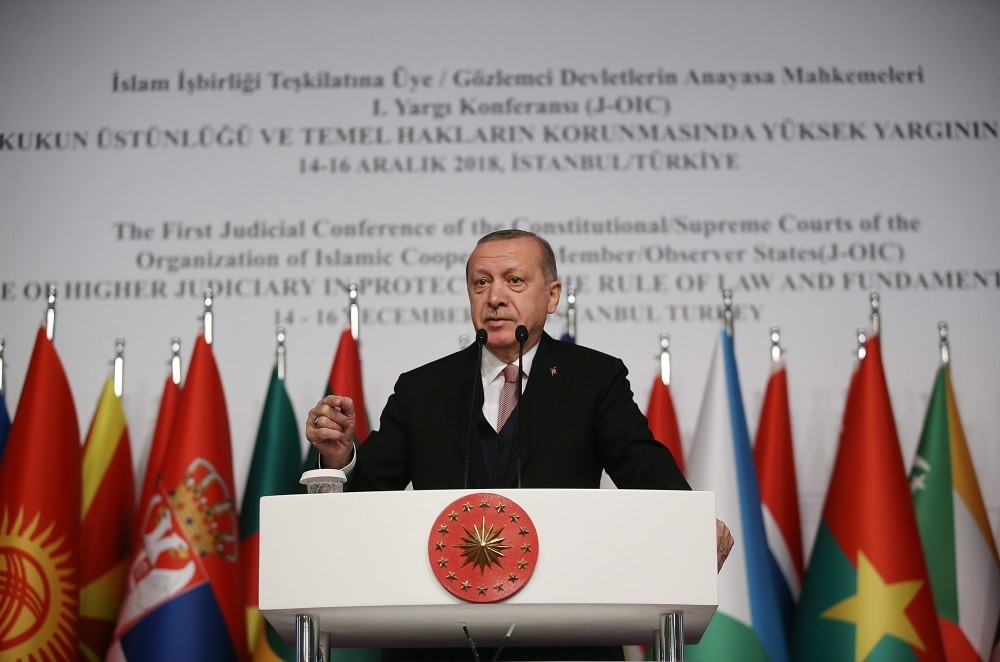 Recep Tayyip Erdou011fan addresses members of the Organisation of Islamic Cooperation (OIC) at a conference in Istanbul, Dec. 14.
by Daily Sabah Dec 15, 2018 12:00 am

The murderers of Jamal Khashoggi are obvious and should be revealed, President Erdoğan said, pointing to the crown prince as the mastermind behind the crime

While the international community has been patiently waiting for information regarding the mysterious killing of dissident Saudi journalist Jamal Khashoggi for more than two months, Turkey continues to share new details of the case with the world, aiming for justice to be done. The latest details came from President Recep Tayyip Erdoğan on Friday, who indicated that voice recordings of the incident prove that the murderers are people close to Saudi Crown Prince Mohammed bin Salman (MBS).

"We've learned from the voice recordings that those closest to the crown prince are the ones who assumed active roles in the murder," Erdoğan said, speaking at a judicial conference of the Organisation of Islamic Cooperation (OIC) in Istanbul. He also emphasized that Turkey will pursue the case until justice has been served. "The identities of those who carried out the orders are known," Erdoğan underlined, adding that everything is being revealed step by step.

Speaking on the issue once again later in the day at a conference on Jerusalem, Erdoğan said that in the voice recordings, the killer says that he knows "how to cut well." He also indicated that Saudi Arabia has tried to fool the world on the matter.

The kingdom initially denied any role in Khashoggi's disappearance before acknowledging that he was murdered inside the consulate but passed the buck to rogue agents, while insisting that the crown prince had no prior knowledge of the matter, an explanation far from convincing for many.

Saying that Turkey asked Saudi authorities the name of the local collaborator they mentioned before, Erdoğan said that the country not only left Ankara's request unanswered but also lied. The foreign minister of Saudi Arabia previously mentioned a local collaborator who helped the hit squad to commit the murder, only to later deny that such a person even existed. "We've given them all the information we have, but they continue to conceal everything," the president said.

On Sunday, Saudi Arabia's foreign minister rejected Turkey's demands to extradite suspects connected to the murder of the journalist. Istanbul's chief prosecutor last week filed warrants for the arrest of Saud al-Qahtani, a top aide to the crown prince, and Gen. Ahmed al-Asiri, who served as deputy head of foreign intelligence. Turkish officials said the prosecutor's office had concluded there was "strong suspicion" that the two suspects were among the planners of Khashoggi's Oct. 2 killing at the Saudi Consulate in Istanbul.

Khashoggi was killed in the kingdom's Istanbul consulate by a team of 15 people consisting of Saudi officials who arrived in Turkey for his murder and a cover-up operation, including dismembering Khashoggi's body. All of the identified individuals have since left Turkey. Saudi authorities launched an investigation against 21 people, including Asiri and Qahtani, over the murder, detaining some of the suspects and seeking the death penalty for five. Asiri and Qahtani were sacked from their positions, according to a statement released on Oct. 20.

Turkish officials have repeatedly suggested that the murder trial be held in Turkey where the crime was committed. Saudi authorities have denied Turkey's requests and said the suspects will be tried in the kingdom. With the court's decision, Turkey could now issue an international arrest warrant for the suspects to be detained anywhere in the world.

U.N. human rights spokeswoman Ravina Shamdasani said in a briefing on Friday that it is not enough for the Khashoggi murder to be investigated by Saudi Arabia alone. "As we've said from the beginning, we are calling for an international investigation to be launched," Shamdasani said. Earlier this week, Foreign Minister Mevlüt Çavuşoğlu said that Turkey is in talks with the United Nations regarding an investigation into Khashoggi's killing.

Last week, U.N. human rights chief Michelle Bachelet also said an international investigation was needed to determine who was responsible for the murder of Khashoggi

Corker's resolution offers a reproach to U.S. President Donald Trump's stance - who, despite reports that American intelligence asserted the crown prince's role in the killing, has maintained warm relations with the kingdom and its de-facto leader. Corker's bill did not face stiff resistance from Senate leadership, which sought to stave off prospects of a clash with the White House over the legislative response to Khashoggi's murder.

As the Khashoggi case has highlighted a growing schism between U.S. lawmakers and U.S. President Donald Trump, the senators said previously that the legislation will be passed when it comes to a full vote in the Senate, adding that it will send a global message indicating that being an ally of the United States, cannot mean killing someone with impunity.

Trump, who has been siding with MBS and Saudi Arabia from the very beginning by ignoring all evidence that points to him, said previously that he hoped senators would not propose stopping arms sales to the Saudis, deals he has doggedly fought to save ever since the gruesome details of Khashoggi's murder were leaked by Turkey.

The announcement of the bipartisan legislation came just hours after CIA Director Gina Haspel briefed leaders on Wednesday in the House over what the intelligence agency knows about the Khashoggi murder. After the CIA briefing, reportedly, it is widely believed that MBS must have at least known about the plot to kill Khashoggi.

Speaking on the issue, outgoing U.S. Ambassador to the U.N. Nikki Haley said on Wednesday that the crown prince was "responsible" for the murder of Khashoggi.