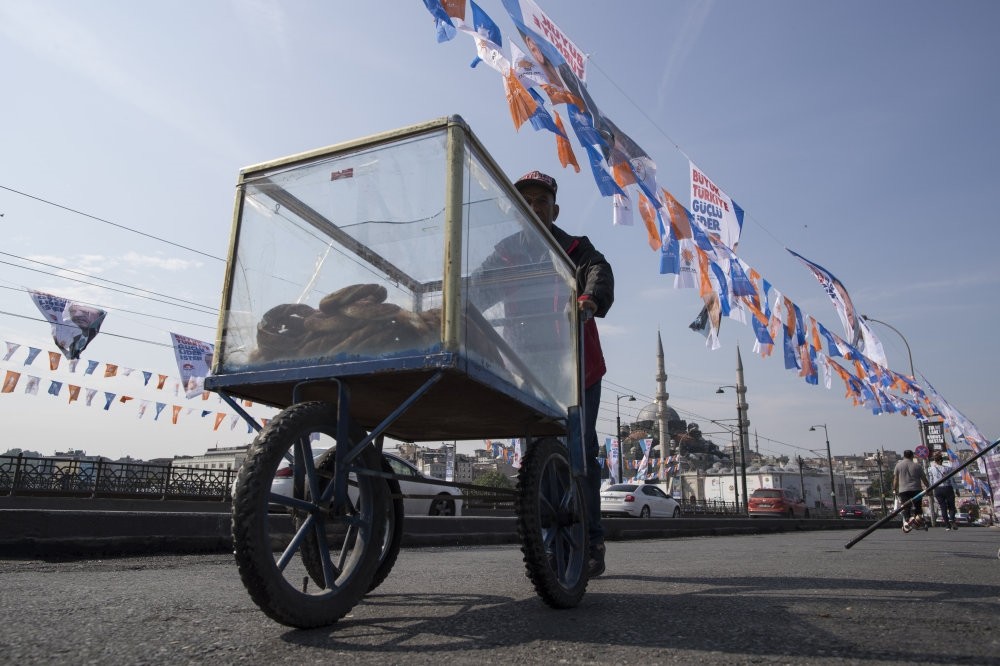 A Turkish street merchant sells Turkish bagels on the Galata Bridge in Istanbul, under campaign posters, June 5.
by Daily Sabah Dec 18, 2018 12:00 am

The AK Party is determined to pursue a green election campaign to minimize both waste and pollution, urging other parties to partake in this process as well

In relation to the AK Party's suggestion for green campaigns that would also prevent noise and visual pollution, Demiröz said the money wasted on banners could be used for different services to benefit people. He added that the Nationalist Movement Party (MHP) has already supported the idea. The deputy chairman also stressed that he believes other political parties would also support the suggestion.

As chairman of the AK Party, President Recep Tayyip Erdoğan announced earlier this month that AK Party will leave traditional campaigning methods behind for the March 2019 municipal elections and instead hold a more environmentally friendly campaign.

Erdoğan underlined that in order to prevent visual pollution, the party will only be allowed to display flags at programs and election coordination centers. AK Party election buses will not tour, except for specific times set beforehand. He underscored that social media and other mediums will take the place of traditional campaigning methods.

Prior to the AK Party's green campaign suggestion, there had been increasing complaints from the public about traditional campaigning methods.

As part of traditional campaigning, parties would fill the streets with colorful flags, posters of the candidates and run election buses constantly playing campaign songs. Despite creating a unique election atmosphere in the country, these methods are considered a nuisance by many. The flags and posters create visual pollution during and after the elections. They are far from having any aesthetic value as they hang between buildings and more importantly, fall in the streets and cause pollution. Minivans that play campaign songs end up creating noise pollution.

Instead of using the old methods, the AK Party has stressed that it would use technology and social media more for the election campaign. Holding green campaigns is expected to address the demands of people and to be welcomed by many.

Since it came to power in 2002, the AK Party has been known for its green policies aimed at increasing environmental sensitivity. According to an AK Party report that explains the activities and performance of the government in the past decade, between

1992 and 2002, the government oversaw afforestation work on some 743,000 hectares of land. This number increased six-fold between 2003 and 2017. During the last decade of the AK Party-led government, 4.9 million hectares were used for forestation. The same report revealed that some 1.5 million hectares of new forests were also planted in Turkey.