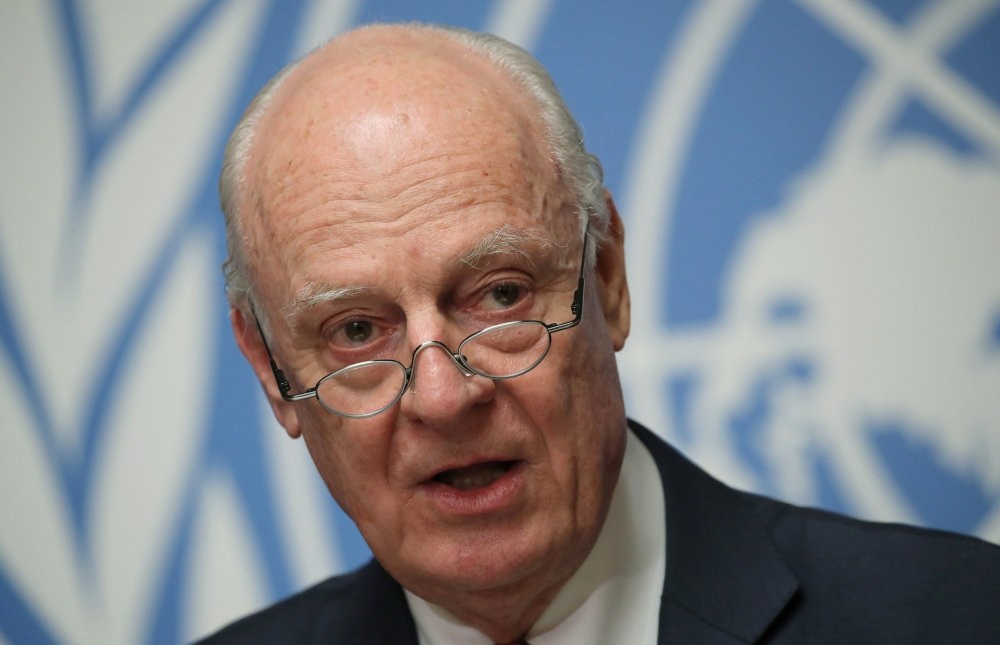 The U.N. special envoy for Syria said Thursday that an "an extra mile" is needed to establish the committee which will draft a new constitution for war-torn Syria, stressing that the lists need revision amid ongoing efforts of the Astana guarantors, Turkey, Iran and Russia, to lay the basis for the political process to be accelerated.

Staffan de Mistura, who bids his farewell, leaving the post of U.N. special envoy for Syria, said in his last U.N. briefing that the list submitted by Turkey, Russia and Iran, the three guarantors of the Astana process, "needs a further review and revision." "The U.N., having examined the names, assessed that we would not feel comfortable yet giving the U.N. stamp of legitimacy to all 50 of them as meeting the necessary criteria of credibility and balance, hence the need for going an extra mile," de Mistura told the U.N. Security Council.

"No list will be perfect. But in our assessment, the list needs a further review and revision," de Mistura added.

In the 150-member constitutional committee, three groups; opposition, Syrian regime and representatives of civil society will be represented. For each group, a list of 50 people will be prepared. Finally, from each group 15 names will be picked and this group of 45 people will draft the constitution.

The establishment of the constitutional committee has been considered as significant for the process ahead in Syria as it is expected to pave way for holding free elections and ending the seven-year conflict.

In relation to the 50-member list of civil society representatives submitted by Turkey, Russia and Iran at a meeting in Geneva on Tuesday, de Mistura said the list included some names from his own list, yet some experienced experts "who would also have been natural bridge builders" were not included.

Commenting on the issue previously, Russian President Vladimir Putin said on Thursday that "We presented a list to the U.N. It turned out - Foreign Minister Sergey Lavrov told me yesterday - that U.N. officials, including Special Envoy for Syria Staffan de Mistura, have adopted a wait-and-see attitude at the behest of our German, French and U.S. partners. I can't understand what is going on there but in any case, the work is in the final stage."

Putin underlined that the list of Syrian constitutional committee members will be ready either at the end of 2018 or in early 2019.

On Tuesday, Turkey, Iran and Russia came together in Geneva for the talks at the U.N., hosted by de Mistura, regarding the formation of the Syrian constitution. "We have opened a final window of opportunity for a political solution in Syria," Foreign Minister Mevlüt Çavuşoğlu highlighted following the meeting, referring to the ongoing efforts for establishing the constitutional committee.