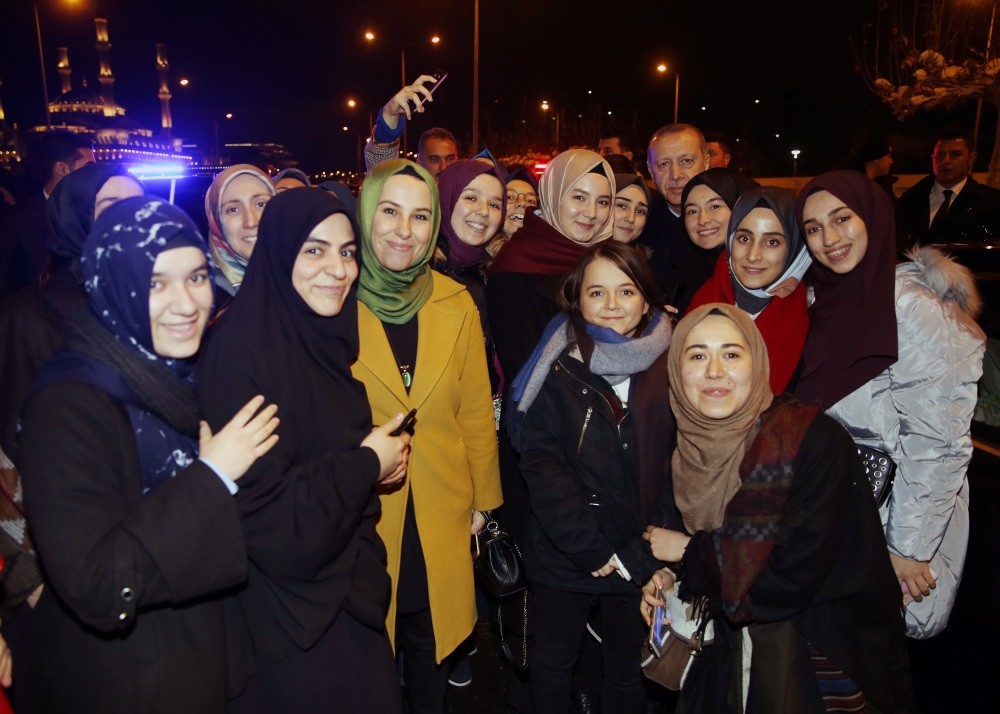 President Recep Tayyip Erdou011fan poses with a group of students during his surprise meeting on Dec. 27 in the capital Ankara.
by daily sabah
Dec 29, 2018 12:00 am

President Recep Tayyip Erdoğan came together on Thursday with a group of students in a surprise meeting following a commemoration event held for Mehmet Akif Ersoy, the author of the country's national anthem.

The students who were waiting for their transportation after the event organized by the Ministry of Youth and Sports in Ankara to commemorate Ersoy, were surprised when the president got out of his vehicle to have chat with them.

In a video shared by the Presidency's Communications Director Fahrettin Altun, the moment the students meeting with Erdoğan was shown. The students who were surprised by meeting Erdoğan were seen taking selfies with him and expressing their happiness.

Erdoğan also responded positively to an invitation from one dormitory personnel to visit the students' dormitory, saying that they can arrange a meeting.

The President often holds surprise meetings with young students and spends time with them with the goal of listening to their expectations or demands.

On June 1, Erdoğan had agreed to join students for a suhoor meal during the holy month of Ramadan at a student dormitory in the capital Ankara after receiving an invitation from a student via Twitter.

Güngör Atak, who is a student at the Ankara Yıldırım Beyazıt University's Faculty of Dentistry, messaged the president on Twitter, asking "Dear President, could you perhaps be our guest at the Hüseyin Gazi dormitory and have suhoor together?"

Erdoğan responded saying that he is "coming if the tea is ready," and later posted a video of the meal he had with students in the dormitory. Excited to see the president, the students welcomed Erdoğan and had the opportunity to chat with him and take selfies during his visit.