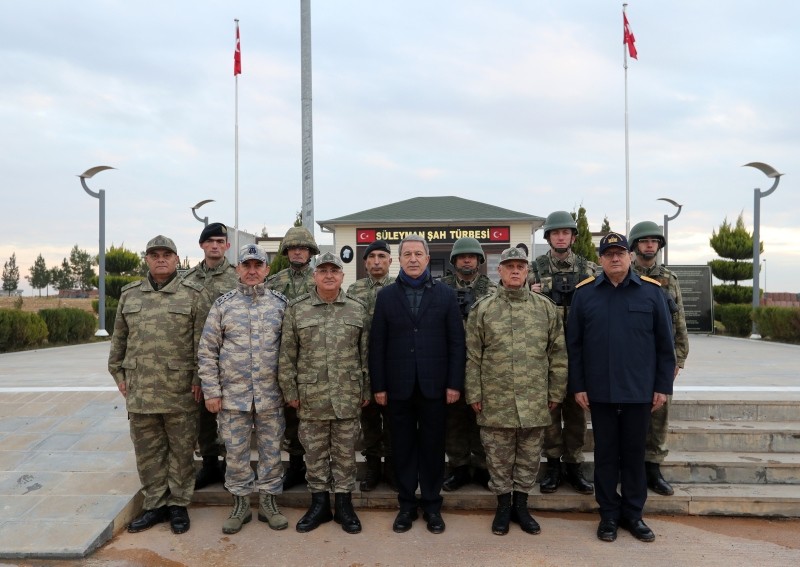 The National Defense Minister Hulusi Akar highlighted Turkey's determination to fight Daesh terrorists during his visit to the tomb of Süleyman Shah located in the Syrian village of Ashmeh, where he had a conference call with President Recep Tayyip Erdoğan who highlighted the importance of the tomb, as the land it is on continues to be the sovereign territory of Turkey.

"Turkey's fight against Daesh continues," Minister Akar said, adding that the Turkish military has undertaken responsibility especially after the president's latest discussions with U.S. President Donald Trump, who said his troops would start to withdraw from Syria.

The officials reportedly inspected the tomb and received a briefing about the current activities.

They spoke with President Erdoğan in a conference call, who reiterated Turkey's determination to protect the compound.

On Feb. 22, 2015, the Turkish military successfully relocated the tomb of Süleyman Shah, the grandfather of the founder of the Ottoman Empire, and extracted 40 soldiers guarding the compound in Syria.

The military force entered the site that is considered sovereign territory by Ankara with 39 tanks, 57 armored cars, 100 vehicles and 572 personnel. Without encountering any skirmishes, they completed the mission, which was carried out some 30 kilometers inside Syrian territory in an area then-controlled by the Daesh terrorist group.

Control over the tomb was given to Turkey by the Treaty of Ankara after the Ottoman Empire lost Syria in World War I. The tomb had already been relocated twice before the recent relocation due to the threat of flooding.

The legendary tomb has had three locations. It was originally located near castle Qalat Jabar in Syria's Raqqa until 1973, when it was moved up the Euphrates banks to Aleppo governorate, 27 kilometers (17 miles) from the Turkish border, to avoid being flooded. In early 2015, Turkey moved the tomb 22 km (14 mi) west of Kobani to protect it from the threat posed by Daesh terrorists.