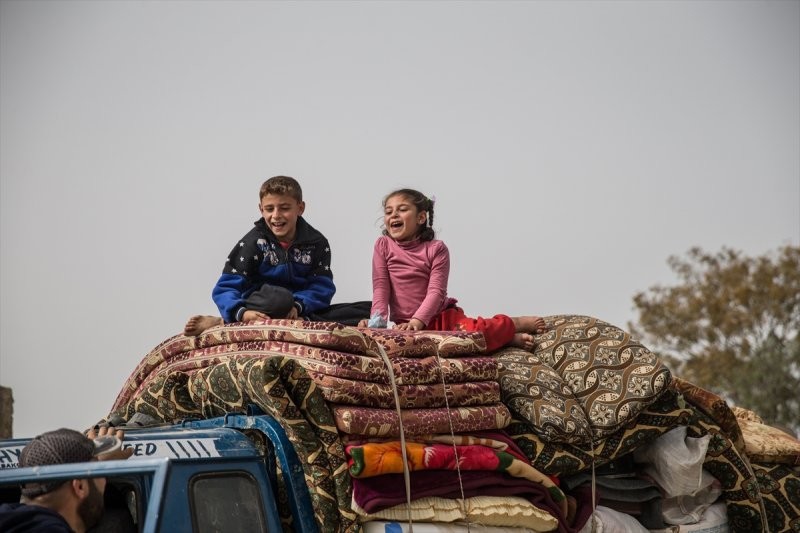 More than 40,000 Syrians left Turkey over the last year for their hometowns, which have been liberated from terrorists in northwestern Syria. Taking refuge in Turkey due to civil war in Syria, a total of 40,574 Syrians from different parts of Turkey used the Cilvegözu Border Gate in the southern province of Hatay to go to Syria's terrorism-free areas in the northwestern Syrian province of Idlib.

Syrians headed to their homeland after legal procedures at the border.

This year, a total of 104,000 trucks loaded with humanitarian aid and commercial materials also used the same border gate.

Previously, Turkey conducted two offensives in northern Syria, Operation Olive Branch and Operation Euphrates Shield. The first was launched by Ankara to clear its borders of Daesh terrorists, while the second was to prevent the People's Protection Units (YPG) from achieving their ultimate plan of establishing an autonomous region in northern Syria by connecting the northwestern Afrin canton to the Kobani and Jazeera cantons in the northeast. Following the operations, Turkey has also been involved in efforts to rebuild the towns' infrastructure, as well as health and educational institutions. Schools are being renovated and a hospital is being built. Turkey is also helping local people build olive oil facilities in the town where agriculture is the main source of income for its residents. Thanks to the success of both operations and the post-operation developments in the liberated areas, the numbers of refugees returning to their hometowns have increased in recent months. Last month, Turkish Interior Minister Süleyman Soylu said nearly 300,000 Syrians returned to their homes after the Turkish military conducted successful operations in the region.

"The number of Syrians who returned to their country after the Operations Euphrates Shield and Olive Branch is 291,790," Soylu said. Since 2011, Turkey has received a constant flow of displaced Syrians fleeing the conflict and their numbers have expanded from mere thousands to millions. Currently, there are more than 3.5 million Syrian refugees in Turkey, which is the highest number in the world. Although the country has many policies to integrate these refugees into society and provide them with good living standards, many are still longing for their hometowns and wishing for life to return to normal as soon as possible for their country.