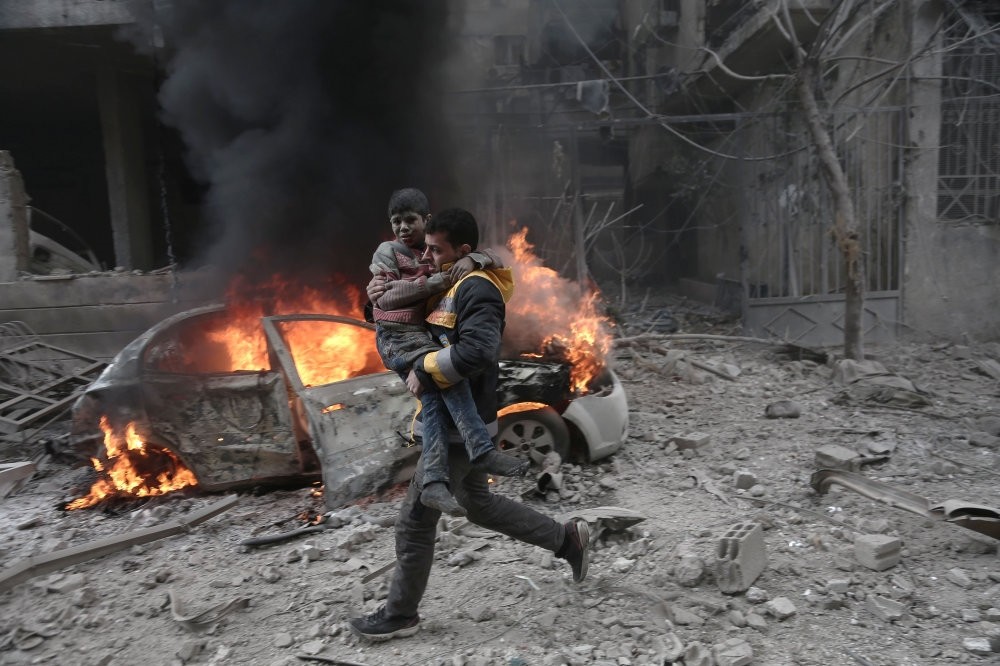 A Syrian paramedic carries an injured child following a reported bombardment by the Syrian regime in opposition-held Hamouria, eastern Ghouta, Jan. 6, 2018.
by Daily Sabah with AFP Jan 03, 2019 12:00 am

The Syrian opposition, feeling "abandoned" over recent developments, suggests there is a change in the attitude of some countries toward the Syrian regime, which is at the height of its power since the beginning of the war

Almost eight years into Syria's devastating war, opponents of the regime are watching in dismay, as the Bashar Assad regime seems to regain its strength both inside and outside the country. Holed up in the last major opposition stronghold or unable to return home after fleeing abroad, Syrian refugees are frustrated since they feel as if they have been abandoned by the international community.

"Today, I'm looking for a homeland," activist Shady Matar, who took refuge in Turkey, told Agence France-Presse (AFP). "I can't go home while the regime is still in power," said the 27-year-old, whose hometown of Daraya near the capital Damascus was retaken by the regime in 2016. He added: "Most countries whose governments say they support the Syrian people have closed their borders to us," expressing his disappointment in many countries.

Sparked by the brutal repression of anti-regime protests in 2011, the conflict has killed more than 360,000 people and displaced millions at home and abroad.

Many attempts to put an end to the war have failed so far as the endless diplomatic efforts have been unable to reach a peaceful transition, and the regime now appears stronger than ever, controlling almost two-thirds of the country.

Recently, there has also been a change in attitudes of several countries towards the Syrian regime. As a matter of fact, on the diplomatic front, efforts seem underway to bring the Damascus regime back into the Arab fold after years of frosty relations.

The Arab League suspended Syria's membership in November 2011 as the death toll mounted and several regional powers bet on the demise of the Bashar Assad regime.

But Sudan's president last month made the first visit by an Arab leader to Damascus since the start of the conflict.

Bilal Bayush, a media activist in the last major opposition stronghold of Idlib, said he was not surprised.

"While our people are dying of cold in refugee camps drowning in cold winter rain, some of our Arab brothers are racing to open up to the criminal who is responsible," he said last week on Twitter.

"Yes, Bashar the criminal may win, he may triumph in the face of the colluding international community," he wrote.

"But he has not and will not defeat the will of the free Syrian people," he added.

He said a solution in Syria required "a real political transition and holding the criminals to account."

Naji Mustafa, a spokesman for the National Liberation Front opposition group in Idlib, said the international community had dropped the Syrian opposition. "The revolution has been orphaned," said the 38-year-old, who defected from the Syrian army in 2012."The whole world abandoned it," he added.

But in the town of Azaz, close to the Turkish border, lawyer and human rights activist Muthana Nasser was determined years of death and destruction would not go to waste.

"The sacrifices and suffering of Syrians will not be in vain," he said.

Whatever the final outcome, "I will tell my children when they grow up about the greatest revolution in contemporary history," said the father of three. "I will recount how the international community watched the bloodshed of innocents only to denounce it and not intervene to stop the massacres," he said.