Adnan Wahhoud is a hero for many people in Syria because of his support for the poorest of the poor, providing them with medical aid and caring for orphans in Syria where the war has destroyed countless lives and the livelihoods of people

"Without the help of Turkey, we would have no way to help the needy," said Adnan Wahhoud, a German-Syrian Ph.D. who has spent years helping Syrians affected by war, expressing his gratitude for the Turkish authorities.

"Thanks to the help of Turkish authorities, we are able to transport medicine and materials across the border without any problems," Wahhoud explained, stressing that he has always been assisted by the governor of the Turkish border city of Hatay, local authorities and humanitarian aid agencies, such as the Disaster and Emergency Management Authority (AFAD) and the Turkish Red Crescent (Kızılay), during his journey of delivering humanitarian aid to his fellow countrymen.

In 2011, Wahhoud completely changed his life. "When the call for freedom, human dignity and democracy in my native Syria was violently cut down, I was 60," Wahhoud said in an interview with Daily Sabah, so he "decided to retire earlier than planned, to help the people in Syria." 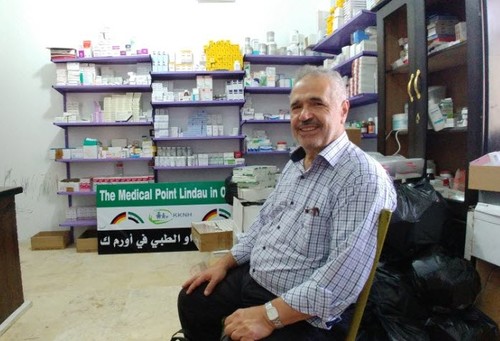 After retiring seven years ago, the suffering of the people in his homeland left him with no peace. In a privately initiated and improvised project, Wahhoud operated a temporary "medical point" with a doctor and his wife for one week to offer free treatment to people in war zones where the primary healthcare system had collapsed. After this step, he saw that continuous professional help was direly needed in Syria. Since then, Wahhoud has founded seven "medical points" in the northwestern province of Idlib. These medical care centers offer free medical treatment and medication. Since 2015, they have treated more than 300,000 people, 70 percent of them children. The medical staff is recruited from the local population. The salaries of the staff and the costs of medicines are covered by donations from Germany.

Wahhoud, the son of a handloom worker, grew up in poor circumstances in Damascus. But he was allowed to attend school and worked at the same time to help out his family. This work at such a young age influenced his later works in science and industry. His desire for knowledge and creativity led him to Europe in 1971 - first to Vienna and then to the German town of Aachen, where he studied mechanical engineering. He eventually joined Lindauer Dornier, a world-renowned manufacturer of textile machinery.

His energy, deep-rooted childhood experience in weaving and inventive spirit helped Wahhoud become a luminary of the weaving technique. His inventions were groundbreaking; the list of his patents is incredibly long and his scientific work has been honored with several awards. "I'm registered as a helper at the Turkish-Syrian border, so I can easily enter the country with my Syrian passport," says Wahhoud. However, when he is on the road, he also needs protection. That's why he always has an armed Free Syrian Army (FSA) guard traveling with him. "I am not affiliated with them, but they support the medical points."

Donations for women and children

Sixty women with 200 children in the province of Aleppo receive monthly support of $45 for basic aid plus $10 per child. Thus, their basic food supplies could be guaranteed. Here, too, Wahhoud pays special attention to the fact that the money goes to those affected: "Paid only to the women, not to the uncles or brothers. The money should go directly to the mothers and children."

Wahhoud also further supports families where the children have to grow up as orphans or as children of single mothers because their fathers were killed in the war. For these families, clothing donations are also regularly collected and distributed directly on site.

When Wahhoud visited the medical point in Yakobiya in the west of Idlib province in early October, he met two women: "They are Christians, they also lost their husbands in the war," he said. They could barely care for themselves and their children.

He learned that there were about two dozen families in the three Christian villages around Yakobiya. The local Catholic pastor has become his new confidant, Wahhoud says. "He ensures that these widows and their children [will] regularly receive some money in the future."

The staff at the seven medical points have their hands full. In September, more than 10,000 patients were treated. The rush is also as strong as it has ever been; thousands of Syrians have fled to Idlib from disputed areas such as Homs and East Ghouta.

At the end of September, Wahhoud spent $11,000 on medicines for outpatient clinics, where three out of four patients were treated for free thanks to donations. His thoroughness allows him to document everything in detail. For example, he knows that only the medical point in Fattiere provided medical care to more than 2,500 people in September.

"The streets are full again, the shops are open, the people are happy that the weapons are silent at the moment." As a "sign of peace" Wahhoud has planted 140 fig trees on a field of about 6,000 square meters.

In his most recent trip to Syria, Wahhoud brought back a very special memory: Instead of the deafening sounds of aircraft and bombs. "I heard birds sing in the morning when I woke up. It was so peaceful," and that's exactly what the 66-year-old man wishes for the future of his homeland.