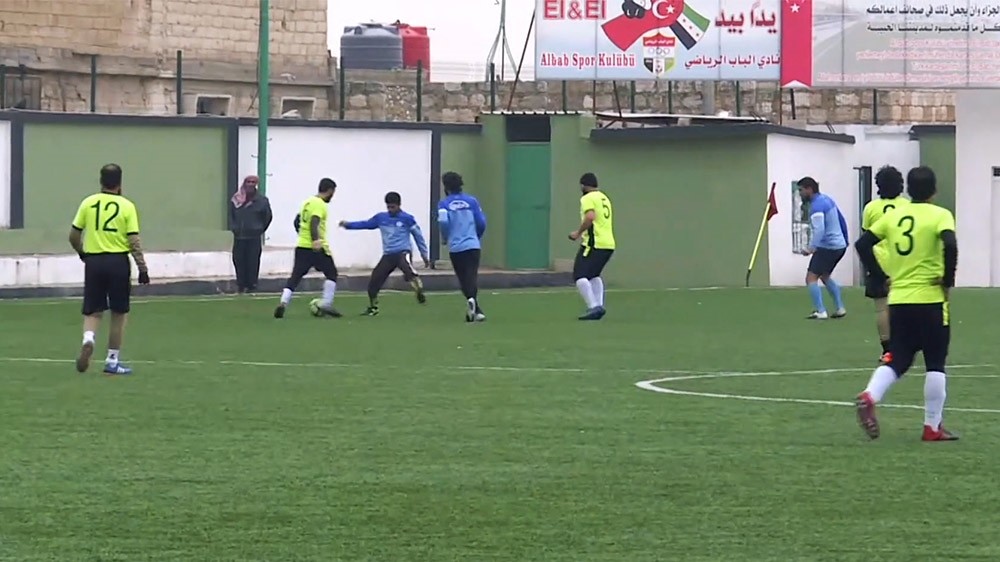 The 26-team football tournament in liberated northern Syria offers fans something to look forward to once again in the war-ravaged towns that were dragged into darkness by Daesh.
by Daily Sabah Jan 23, 2019 1:09 am

Life in Syria's terror-free areas is returning to normal thanks to Turkey's post-operation efforts in the region, which encourage locals to engage in various activities, including football

A football tournament is being held in northern Syria's al-Bab, a town that was liberated from terrorist elements by a Turkish military offensive. The tournament will see the attendance of soccer teams from eastern and northern Syrian territories as part of Turkey's efforts to normalize life in the region following the operation. The tournament will be hosted at a stadium in al-Bab. The 1,000-seat stadium was destroyed in the civil war and later fully renovated by Turkey's Directorate of Youth and Sports, which operates in al-Rai and al-Bab. The 26-team football tournament will offer football to fans once again in war-ravaged towns dragged into darkness by Daesh.

The Euphrates Shield Tournament, named after Turkey's military operation, include many war victim players and managers. Soccer teams from al-Bab, Raqqa, Manbij and Jarablus are participating in the tournament.

In 2016, Turkey launched Operation Euphrates Shield and cleared al-Bab of Daesh terrorists. Since then, Turkish authorities have launched many initiatives to bring daily life back to normal in the town and the broader Euphrates Shield region, consisting of northern Syrian towns.

Football was part of this daily life in these areas and also one of the things prohibited by Daesh along with many other activities during its grip in the area.

"We couldn't have even imagined these days. We are grateful for all efforts", said Abdulkadir Abukishi, whose 20-year-old football player son was killed by Daesh, a few weeks after Daesh took control of the town. "The football game, which is being played here now, is living proof of the motto of 'Football is not just football.' Liberated people are living the joy of football, which was once sought to be erased," he added.

Abu Ubeyd, a tournament official, said that football games are being played in al-Bab and Jarablus stadiums, adding that 26 teams will be divided to two different leagues consisting of 13 teams each next year.

Al-Bab, an important crossroads and settlement in northeastern Aleppo province, was liberated from the cruel four-year-long period of Daesh rule on Feb. 22, 2017, by the Turkish Armed Forces (TSK) and Free Syrian Army (FSA) fighters as part of Operation Euphrates Shield launched on Aug. 24, 2016, to clear the terrorist group from Turkey's border regions.

Since the liberation of the province, al-Bab's population has jumped from 130,000 to 300,000, with its economy and services benefiting from the safe environment.

Due to its strategic importance, al-Bab witnessed the fiercest clashes between Daesh terrorists and Turkish forces, especially in the Sheikh Aqeel district overlooking the town.

As a part of these reconstruction efforts, Turkey opened a 500-bed hospital in al-Bab in April, the third and largest medical institution in the area. The hospitals, which are run by the Turkish Health Ministry, are equ

ipped with all the necessary equipment in case of an armed conflict.

Turkey's first hospital opened in Jarablus in September 2016, after the town was liberated by Operation Euphrates Shield. Along with the two hospitals in al-Bab and Jarablus, another one came into service in Afrin, which was liberated from the People's Protection Units (YPG) on March 18 by Operation Olive Branch.

Besides for health services, there has also been rapid recovery in terms of infrastructure, security and social life in northern Syria in areas liberated by Turkish and FSA forces. An administration was established with the participation of local people in areas cleared of Daesh, including al-Rai, Jarablus, al-Bab and Azaz.

Light was also brought back to al-Bab, Jarablus, al-Rai and Azaz by Turkey with the help of 600 new solar-powered street lights in July.

The solar panel street lights were placed by local Syrian nongovernmental organizations (NGOs) - founded with Turkish help - in northern Syrian Daesh-free districts, south of Turkey's border. With the help of solar streetlights, the economic burden on the towns is reduced and residents say that women and children can now go out freely.

Also, significant steps were taken in terms of education with a trilingual university faculty established. Turkey's Harran University in southeastern Şanlıurfa established a faculty in al-Bab that started classes in September last year; it operates in English, Turkish and Arabic.

Moreover, local councils have also been established to administer the normalization process after the eviction of Daesh; regular security forces were formed, and the local councils manage projects on education, infrastructure and the economy.