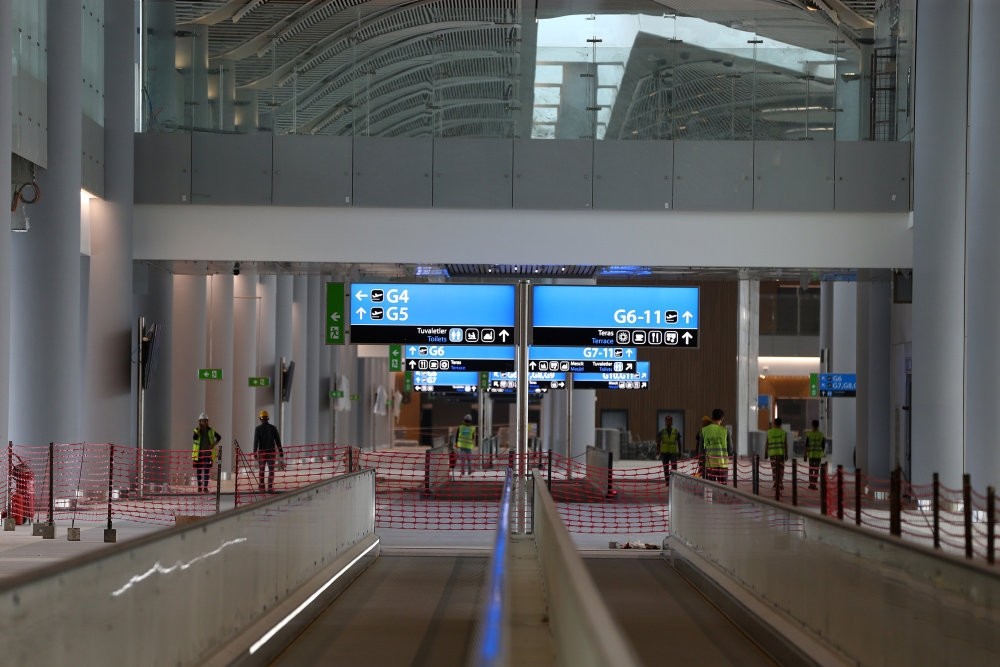 On Thursday, Ans Boersma was deported due to a link to an ongoing terrorism probe in the Netherlands.
by Daily Sabah Jan 19, 2019 12:00 am

The deported Dutch journalist is suspected of assisting her ex-boyfriend, who has links to the al-Nusra Front terrorist group, in obtaining a residence permit by using fake documents

The circumstances behind the deportation of Dutch journalist Ans Boersma, who was working as the Istanbul correspondent for the Financieele Dagblad (FD), are gradually being uncovered with new information showing that she is suspected of committing forgery on a visa application for her Syrian ex-boyfriend, who was arrested in Amsterdam on suspicion of belonging to a terrorist organization.

Dutch television program Nieuwsuur reported on Thursday that Boersma helped her then-boyfriend on his visa application in 2013 and 2014 by using a fake name and forging a Syrian passport for him, which eventually enabled him to get a residence permit in the Netherlands.

The TV program based its information on sources in The Hague. It is also reported that the ex-boyfriend was arrested in Amsterdam in October 2018 due to his suspected links to the Nusra Front terrorist organization. The relationship, however, lasted until the summer of 2015, according to Boersma, whom has become the first one to relate her deportation with the ex-boyfriend by sharing a statement on FD.

The Nusra Front is known for its link to al-Qaeda and is recognized as a terrorist group by Turkey, the U.S. and the U.K., among others. Turkey also listed Hay'at Tahrir al-Sham (HTS) as an alternate name for the Nusra Front in August 2018 and declared it a terrorist organization.

"It is possible for Ans to believe that her expulsion is related to the fact that she had a relationship with a Syrian who was arrested in the Netherlands last autumn due to former membership in the Syrian terror organization Nusra Front. Ans started working for the FD in February 2017," said FD regarding the deportation of its employee. It is also reported that the trial the journalist was a suspect in was actually her ex-boyfriend's trial.

Boersma arrived in Turkey on Wednesday to extend her resident permit in the country. However, at the police station, she was reportedly informed that she would be deported since a ban was imposed on her passport on Jan. 5. Then, on Thursday morning, she was deported and arrived back in the Netherlands.

After the incident, Presidential Communications Director Fahrettin Altun confirmed that Turkey deported a Dutch journalist linked to an ongoing terrorism probe in the Netherlands.

"I regret to inform you that Johanna Cornelia Boersma, a freelance reporter for the Dutch newspaper Het Financieele Dagblad, was deported this morning. The Communications Directorate had issued a press card for Ms. Boersma, which was valid until Jan. 31, 2019, earlier this month," said Altun.

However, the deportation of Boersma was first considered as yet another opportunity, especially by Western media, to unjustly attack press freedom in Turkey - up until the truth came out. Even Boersma herself tweeted right after being deported on social media with the hashtags #pressfreedom, #freeturkeymedia. Then, misinformation and prejudice toward Turkey and its justice system spread like a plague on social media. The chief editor of the FD, Jan Bonjer, shared on Twitter that the deportation is "a blatant violation of press freedom." The secretary of the Netherlands' Federation of Journalists (NFJ) wrote, "A new low in the anti-engaging policy," from his Twitter account. The misunderstanding and unfair judgment reached a point that parliamentary questions have been asked in the House of Representatives on the matter, while asking the Foreign Ministry whether they will take any steps to summon the Turkish envoy of the country.

Yet, on Thursday afternoon, the truth surfaced with Altun's statement underlining that the deportation was in no way related to Boersma's journalistic activities during her stay in Turkey. Altun added that the Dutch police had also requested information about her movements in and out of Turkey.

Yet, despite Altun's statements, the local Dutch newspaper Het Parool claimed that the deportation of the journalist did not come at the request of Dutch prosecutors. As a response to these claims, Altun tweeted later in the day: "If a credible foreign gov't agency tells you that one of their citizens has links to terrorism, you don't take any chances. The Dutch authorities alone are in a position to explain why they arrived at that conclusion. We won't speculate on the credibility of their intelligence."

Then, the Dutch public prosecution department also made a statement, saying that Boersma's name is involved with a criminal investigation relating to terrorism, although she is not suspected of any terrorist activity.

According to a statement shared on FD, Boersma was being observed secretly by the Koninklijke Marechaussee, a policing force that works as part of the Dutch military, since Dec. 4, 2018.

Late Thursday, the Foreign Trade and Development Cooperation Minister said in the House of Representatives, "Foreign Affairs was not informed about these kinds of steps [the deportation], the Public Prosecution Service has its own channels and the police as well."

Still, the FD's chief editor indicated that he wants a clarification of the case since it is not completely clear how a Dutch journalist's deportation can be asked of Turkey without information from the Foreign Affairs Ministry.