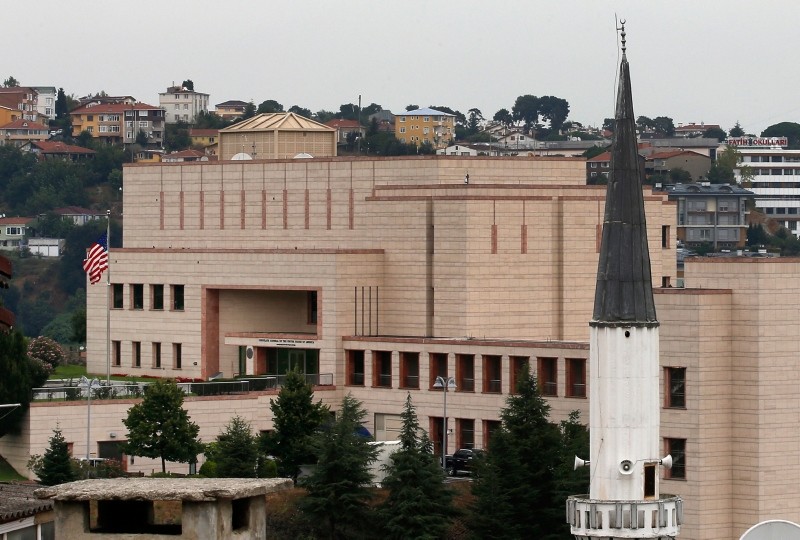 In this Tuesday, Aug. 11, 2015 file photo, a mosque's minaret is seen backdropped by the United States consulate building in Istanbul (AP Photo)
by Compiled from Wire Services Feb 01, 2019 6:52 pm

A Turkish employee of the U.S. Consulate in Istanbul is set to go on trial in March on charges of espionage and attempting to overthrow the Turkish government, a court decided Friday after it accepted an indictment against him.

Turkish prosecutors are seeking up to 35 years in prison for Metin Topuz, a former employee of the U.S. Consulate in Istanbul arrested for alleged ties to the Gülenist Terror Group (FETÖ).

A court ruled to keep Metin Topuz, a translator and fixer for the Drug Enforcement Agency, in pretrial detention until trial hearings scheduled for March 26-28, state-run Anadolu news agency reported. Topuz has been in custody since October 2017.

Prosecutors' indictment of Metin Topuz filed Friday contains multiple accusations including attempting to overthrow the government of the Republic of Turkey, acquiring state secrets for purposes of espionage, and spying.

The first hearing is set for March 26, and Topuz is the sole suspect. There are 30 plaintiffs, including President Recep Tayyip Erdoğan.

The indictment suggests that Topuz had connections to key FETÖ suspects Adil Öksüz and Zekeriya Öz. He is also accused of involvement in an earlier December 2013 coup attempt, but that is to be tried in a separate case.

An Istanbul prosecutors' probe found that Topuz had connections with former police chiefs affiliated with FETÖ and Öz, a fugitive former prosecutor sought for involvement in the defeated 2016 coup attempt in Turkey as well as the 2013 attempt.

Dec. 17-25, 2013 saw a graft probe and the detention of prominent figures in a FETÖ plot to overthrow Turkey's elected government.