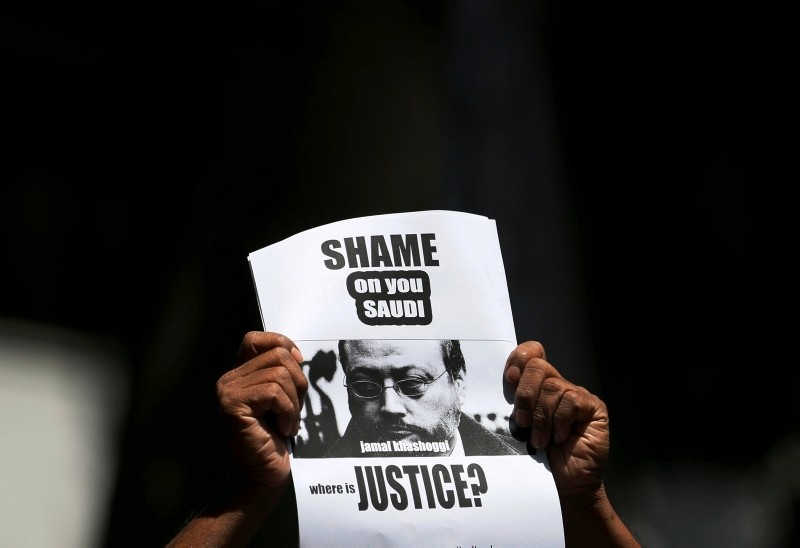 A member of Sri Lankan Web Journalist Association holds a placard during a protest condemning the murder of slain journalist Jamal Khashoggi in front of the Saudi embassy in Colombo, Sri Lanka, October 25, 2018. (Reuters Photo)
by Feb 05, 2019 12:47 am

President Recep Tayyip Erdoğan has accused the US of inaction over the murder of Saudi journalist Jamal Khashoggi in Istanbul four months ago.

Renewing his demand for a full investigation into the dissident reporter's killing in the Saudi consulate in early October, Erdoğan told state broadcaster TRT on Sunday he could not understand America's "silence" in the face of this "atrocity."

US President Donald Trump has said he is opposed to imposing sanctions on the Saudi leadership, vowing to remain a "steadfast partner" of Saudi Arabia rather than risk economic loss by damaging relations.

Saudi Arabia said Khashoggi's death was the result of a "rogue operation" and has put 11 defendants on trial for the crime. Only after massive international pressure did the government in Riyadh admit Khashoggi was killed by Saudi agents.

Erdoğan has long insisted that the order to kill Khashoggi, a vocal critic of Crown Prince Mohammed bin Salman, came from the highest levels of the Saudi government.

In December, the US Senate passed a bill that directly pinned the blame for the murder on the crown prince and ordered the US military to cease all assistance to the Saudi-led war in Yemen.