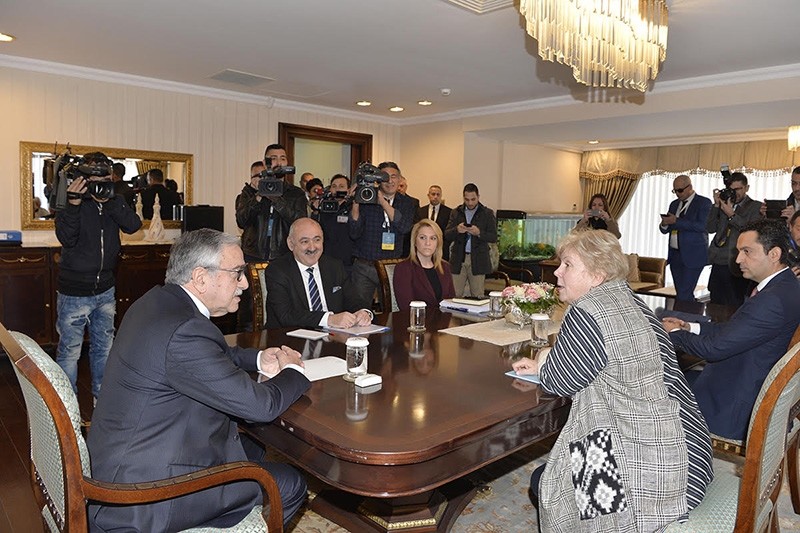 | AA Photo
by Compiled from Wire Services Feb 04, 2019 12:15 am
Turkish Cypriot President Mustafa Akıncı on Sunday received the U.N. special envoy to Cyprus at the presidential palace in Lefkoşa.

Akıncı and Jane Holl Lute discussed whether a basis could be formed to ensure the maintenance of negotiations regarding the Cyprus issue.

On Wednesday, the U.N. Security Council (UNSC) called on Turkish and Greek Cypriot leaders to agree on terms to restart negotiations aimed at resolving the knotted Cyprus issue and reunifying the divided island "within a foreseeable horizon."

According to a resolution approved unanimously by the UNSC, regret at the lack of progress toward a Cyprus settlement was conveyed, urging both sides "to seize the important opportunity" of consultations with Lute to find a way forward.

In 2004, negotiations over Cyprus resumed after the U.N.-backed Annan Plan to reunify the Turkish Cypriot and Greek Cypriot communities.

The reunification talks -- brokered by U.N. Special Cyprus Envoy Espen Barth Eide -- were launched in May 2015 to discuss a permanent settlement for the divided Mediterranean island.

There has been an on-and-off peace process over recent years, the latest failed initiative having taken place in Crans-Montana, Switzerland in July 2017 under the auspices of guarantor countries Turkey, Greece and the U.K.