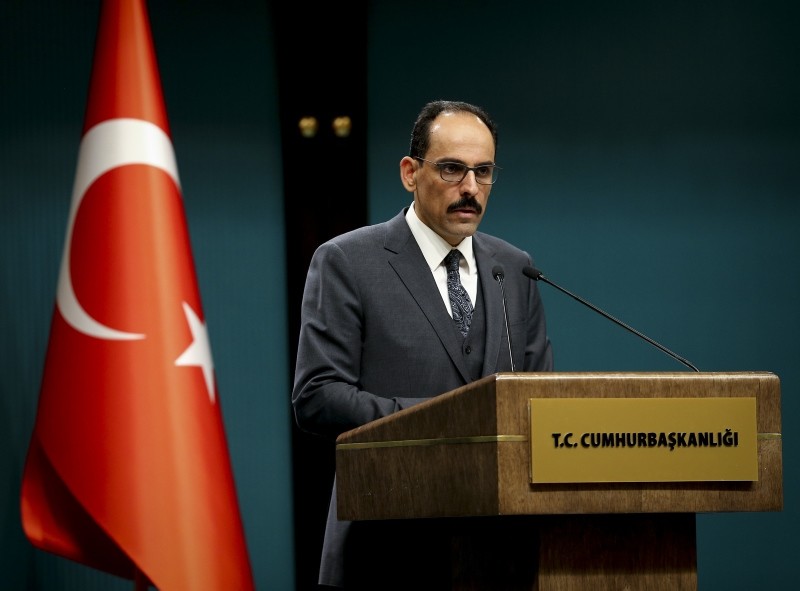 The Assad regime in neighboring Syria is illegitimate and far from promising any future for the country, Turkey's presidential spokesman said on Monday.

Following a Cabinet meeting in the presidential complex in Ankara, Ibrahim Kalın said, "Turkish intelligence departments may sometimes have contacts with various regime elements in al-Hasakah and Qamishli, including Damascus [government], in the framework of Turkey's security and the overall safety of Turkish operations in Syria."

But, he added: "This does not mean that Turkey recognizes the legitimacy of the [Syrian] regime."

Kalin said Turkey would not allow any terror threats from east of the Euphrates River in Syria and also stressed the importance of the roadmap for stability in Manbij, northern Syria.

Turkey has promised a counter-terrorist operation in Syria, east of the Euphrates, following two similar successful operations since 2016.

The Manbij deal between Turkey and the U.S. focuses on the withdrawal of YPG/PKK terrorists from the city to stabilize the region, which is in the northeast of northern Syria's Aleppo province.

"Immediate implementation of the Manbij roadmap without any delay is significant for U.S.-Turkey ties, regional safety, and the process in Syria," Kalın said, adding that Turkey and Russia also agreed on the roadmap as agreed with the U.S.

Mentioning the Astana and Geneva process peace talks on Syria, Kalın vowed to continue efforts to provide safety and stability in Syria with respect for the country's territorial integrity.

Mentioning a Turkish Defense Ministry delegation visit to Moscow last month to talk about recent developments in Syria, Kalın said talks on a "safe zone, Idlib, and other issues will continue with Russia in the coming days."

Kalın said Foreign Minister Mevlüt Çavuşoğlu would also pay a visit to the U.S. on Tuesday to attend a Turkey-Syria coordination meeting, adding that the safe zone issue would be brought up during the talks.

Kalın stressed that Turkey's main goal is to ensure steps to provide for Turkey's safety, and continued:

"Control [of the safety zone] should be maintained by Turkey, not another force.

"All the relevant departments of the Turkish Republic, the military and intelligence units, have proved to date that they have the capability to provide security for everyone in Afrin and Idlib [Syria]."

Kalın said Turkey should have control of the area east of the Euphrates River -- where a Turkish counter-terror operation is planned -- to be able to implement a similar model.

"No matter what name they have, SDF or PYD/YPG, Turkey will never allow [a model] to be a shield or camouflage for the terror groups," Kalın said.

In its more than 30-year terror campaign against Turkey, the PKK -- listed as a terrorist organization by Turkey, the U.S. and the EU -- has been responsible for the deaths of nearly 40,000 people, including women and children. The PYD/YPG is the group's Syrian branch, and it also uses the name SDF.

Turkey and Russia, together with Iran, are the guarantor countries which brokered a cease-fire in Syria in December 2016, leading to the Astana talks, which are running parallel to the Geneva talks.

Kalın also denied reports that Turkey and the U.S. have agreed on a "safe zone" in Syria, saying that talks are still ongoing.

Kalın said during the Cabinet meeting Foreign Minister Çavuşoğlu and National Defense Minister Hulusi Akar underlined some important issues about the situation in the Mediterranean.

"Turkey will continue its decisive stance to defend fundamental rights arising from its sovereign rights in the Aegean and Mediterranean and Black Sea," Kalın said.

"Turkey will not tolerate any fait accompli in the eastern Mediterranean, no matter from whom."

He also expressed concerns about the U.S. and Russian withdrawal from the Intermediate-Range Nuclear (INF) treaty.

On Friday, Secretary of State Mike Pompeo announced the U.S. would suspend its participation in a ballistic missile treaty over alleged Russian violations of the pact.

On Saturday, in a tit-for-tat response, Russian President Vladimir Putin said Russia was suspending its obligations under the treaty.

The treaty has been widely seen as a cornerstone of European security in the post-Cold War era.

Signed in 1987 between the U.S. and Russia, the INF treaty prohibited both countries from possessing and testing ground launch missiles with a range of 500-5,500 kilometers.