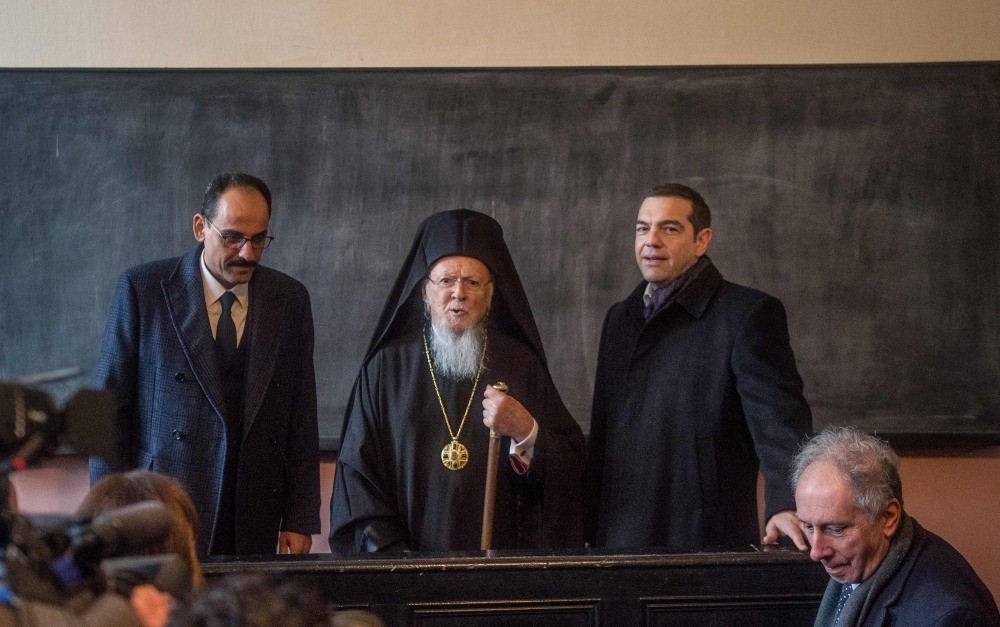 The Greek prime minister's time in Turkey was marked by visits to historical sites that have crucial significance for the Greek Orthodox community, particularly the Halki Seminary which was closed in 1971 and has been an issue between the countries

On the second day of his official visit to Turkey, Greek Prime Minister Alexis Tsipras visited a historic former seminary on Istanbul's Princes' Islands Wednesday, a first by a Greek leader in decades. Tsipras was accompanied by Presidential Spokesperson İbrahim Kalın during his visit to the Halki Seminary on Heybeliada, where he also took part in a religious ceremony headed by Fener Greek Orthodox Patriarch Bartholomew.

The historic seminary has been a sticking point in Turkey-Greece ties, mainly because of its symbolic importance for the Greek Orthodox community. The building was used as a church for more than 10 centuries between the ninth and the 19th century. However, in 1844 it was converted into a religious school that raised reverends, with a curriculum mainly based on theology. It was the first academic school after the University of Athens' Theology Department within the Orthodox community.

Although the main aim of the school was to raise men of the cloth, not all the graduates of the schools had to be reverends. As a matter of fact, among its 1,000 graduates, many involved in other professions, like teaching and dentistry. The school was also known for its library consisting of more than 120,000 books in various languages, including Greek, Turkish and Arabic.

Although it was initially established for Greeks only, a Turkish law 1952 allowed the admission of foreign students. However, in 1964, that decision was revered due to security concerns. The year was also critical in terms of Turkey-Greece relations because of the heightened tension over the Cyprus case which led many of Istanbul's Greek population to migrate to Greece.

In 1971, the seminary was closed under a law that placed religious and military training under state control following a military coup in Turkey. Today, according to the Turkish law, the school has to be affiliated with a Turkish University or a theology department. However, the Patriarch rejects such option and demands it to be converted into a private school under the country's Ministry of Education. Although currently unable to provide education, the school building is being used for various activities from, including conferences, exhibitions, concerts and touristic events.

On Tuesday, President Recep Tayyip Erdoğan suggested during his joint press conference with Tsipras that the seminary could be reopened if Athens improved the living conditions for the Muslim community in Western Thrace, an area of Greece with a large Muslim-Turkish population.

The election of religious leaders or muftis has been a key problem for Greece's Muslim-Turkish minority of some 150,000, concentrated in the Western Thrace region, since 1991. The 1923 Treaty of Lausanne guarantees the religious freedom of the Muslim minority in Greece. However, Greece annulled the Greek Act in 1991 and started appointing the muftis itself. Before visiting Heybeliada, the Greek prime minister also visited the Hagia Sophia museum. Built by the Byzantines, Hagia Sophia served as a Christian church until it was converted into a mosque in 1453 when the Ottomans conquered Istanbul. In 1935 it was turned into a museum upon the orders of Mustafa Kemal Atatürk, the first president of the Republic of Turkey.

Hagia Sophia, which was the foremost cathedral in Christendom for 900 years and one of Islam's greatest mosques for another 500 years. It has been a museum since 1935.

Tuesday's joint press conference witnessed the discussion over many other topics that concern both states and their bilateral relations. One of those topics was the coup plotters that fled to Greece.

Erdoğan said that Greece should not become a safe haven for coup-plotters and terrorists, referring to the fugitives linked to the Gülenist Terror Group (FETÖ). He underscored that disputes between the two countries could be resolved "peacefully" through dialogue. "We, like Turkey, believe all the problems with Greece could be resolved peacefully on the basis of fairness," he said.

Also on Tuesday, Turkey updated a list of former military officers wanted for their role in a 2016 coup attempt to include the eight officers who have been granted asylum in Greece, with a bounty of TL 4 million each.

Greece does not welcome coup plotters but the case of the eight soldiers is a matter of the judiciary, Tsipras said, adding that what is more important is "to strengthen our cooperation on security."

FETÖ orchestrated the defeated coup of July 15, 2016, in Turkey, which killed 251 people and injured nearly 2,200. Tsipras also mentioned the tension in the Aegean Sea, saying that Greece and Turkey have agreed to de-escalate any tensions in the Aegean Sea and proceed with confidence-building measures, while any differences with Turkey "can and must be solved with dialogue."

"A politician's job is not to win enemies but friends... otherwise, you constantly lose blood," Erdoğan said. Touching on the refugee deal signed between Turkey and the EU in March 2016, Erdoğan said that the EU did not fully realize the visa liberalization and the immigrant agreement, and urged the bloc to be loyal to its promises. The 2016-deal looked to discourage irregular migration through the Aegean Sea by taking stricter measures against human traffickers and improving the conditions of more than 3 million Syrian refugees in Turkey. It also allowed for the acceleration of Turkey's EU membership bid and visa-free travel for Turkish nationals within the Schengen area.