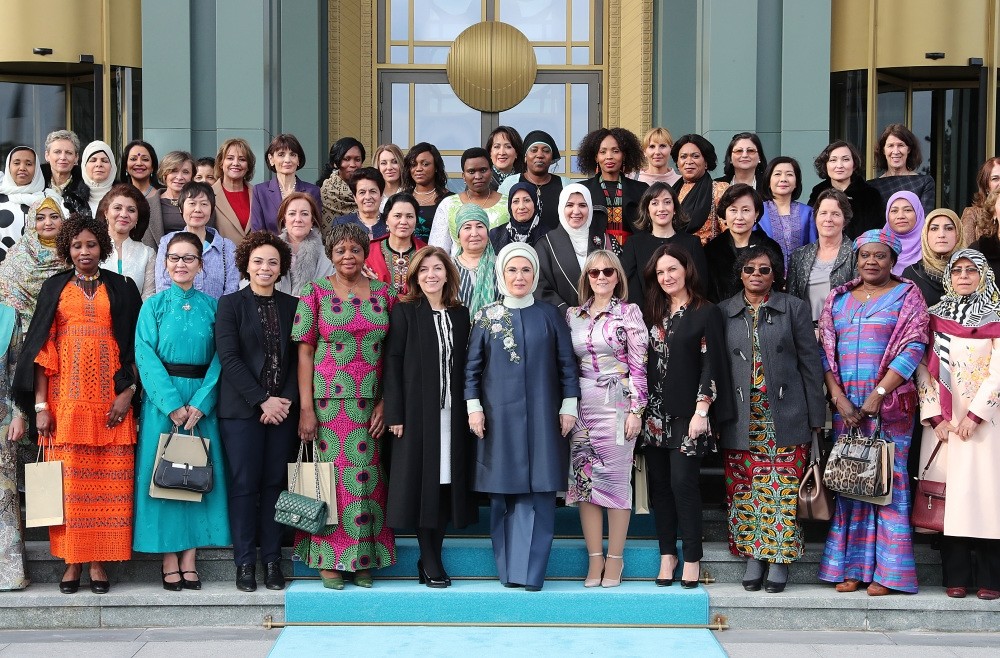 First lady Emine Erdou011fan (C) alongside the spouses of foreign envoys and female ambassadors following an event at the Beu015ftepe Presidential Complex, Ankara, Feb. 13, 2019.
by Özgenur Sevinç Feb 14, 2019 12:03 am

Emine Erdoğan praised the women envoys and views of foreign envoys, saying that they are adding richness to Turkey by enhancing cultural dialogue and building bridges

First lady Emine Erdoğan hosted an event Wednesday with the participation of women ambassadors and female spouses of foreign envoys at the Beştepe Presidential Complex where the miniature paintings of 14 women were displayed in an exhibition. In the event, Emine Erdoğan stressed the role of ambassadors and their spouses in enhancing cultural dialogue and building bridges between people. "You add richness to our country as members of different cultures. You are key to cultural communication," she said during the lunch following the miniature exhibition.

"I attach great importance to the cultural interaction and energy that ensues from it; because when people get to know each other the prejudices and hostilities disappear. Therefore, the source of peace in the world is acquaintanceship," she added.

In the event, the female ambassadors and the wives of ambassadors in Ankara also viewed the miniatures painted by a group of women.

In relation to the miniature exhibition that depicts the life of Sultan Süleyman I, Emine Erdoğan said that local cultures should be protected in a world where they are destroyed by globalization, adding that they want to introduce this unique art to the world.

She stressed that Turkey is a rich country in terms of producing art and said that she hopes that the members of foreign missions would have the opportunity to see them.

The head of the miniature project group Özcan Özcan stressed that the miniature form is an old Turkish art and they aim to introduce this art to the world through these paintings.

Özcan said that there were over 60 paintings at the exhibition.

Commenting on the paintings depicting the life of Ottoman ruler Süleyman I, known as Süleyman the Magnificent, Austrian Ambassador to Turkey Ulrike Tilly told Daily Sabah that "I am very honored to have been invited by Madame Erdoğan to this event and have the possibility to see this beautiful exhibition which is about one of your great rulers. I think each of the paintings are beautiful."

Viewing one of the paintings in the exhibition which depicts Süleyman receiving an Iranian envoy, Netherlands Ambassador to Ankara Marjanne de Kwaasteniet told Daily Sabah that she likes that the paintings are so colorful, "because of the colors the painting speaks to you."

"Despite the fact that they are all miniatures, the techniques of each painting is different," de Kwaasteniet said.

Stressing the role of art in bringing light to the culture and history, Thai Ambassador Phantipha Lamsudha Ekarohit said that she thinks that the event is a very good initiative, and has allowed woman ambassadors and also spouses of foreign ambassadors to learn about historical characters like Sultan Süleyman through art.

She added that "Turkey is very rich in history and culture and sometimes it is better to explain a historical person through art works. It is a good occasion as well for artists as they have been appreciated by foreigners." 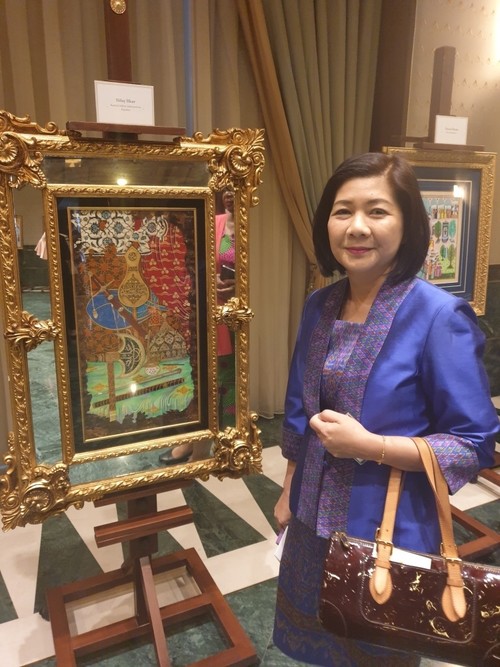 During the event the female ambassadors and spouses of ambassadors were given miniature presents as well.

Shaza Syrus, the wife of the Pakistani envoy said, "It is an honor granted by the first lady inviting all the spouses of heads of missions and female ambassadors and giving them the opportunity to see this excellent exhibition prepared by women. This shows the power of women and I am glad that it is recognized and appreciated by the world."

"I really appreciate the fact that female strength and abilities were highlighted by the first lady making sure that the world recognizes them and respects them," she added.

During the lunch, the first lady also highlighted that in the project "My Neighbor, the Ambassador" which reflected the engagement of 20 ambassadors of EU member countries to Ankara with Turkish people and daily life, German Ambassador Martin Erdmann was the winner. The first lady congratulated the ambassador and his wife and said, "They showed that being an ambassador is not only a diplomatic service, but a way to build humanitarian and cultural bridges."