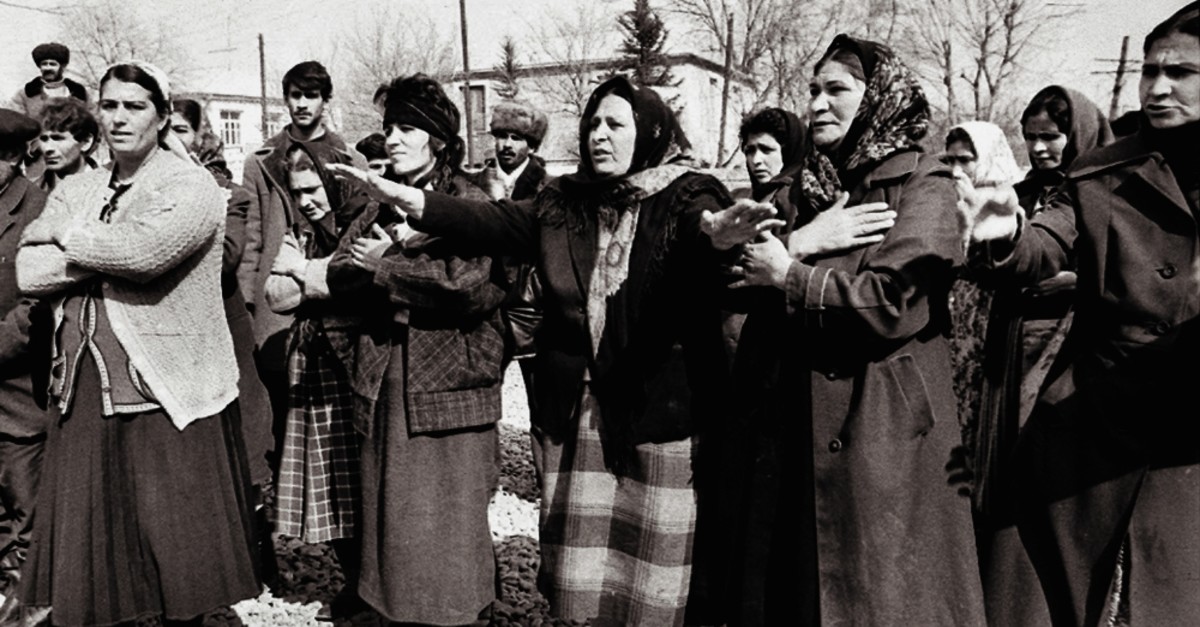 On Feb. 26, 1992, 613 Azerbaijani civilians were brutally killed by Armenian forces in Khojaly, a small town in the country's upper Karabakh region, according to official numbers.
by Şeyma Nazlı Gürbüz Feb 26, 2019 12:07 am

Although it has been decades since the massacre took place, the people responsible have still not been brought to justice and the whereabouts of the 150 captives are still unknown, pushing the already existing grief to unbearable levels

It was 27 years ago today that 613 civilians in Khojaly in Azerbaijan's Upper Karabakh region, including children and the elderly, were massacred by Armenian forces.

"We stand in solidarity with our Azerbaijani brothers and sisters in their rightful cause," the Foreign Affairs Committee said Monday in a statement, calling on international organizations to address the massacre.

"By the time the night ended, there was nothing familiar left of my mother as her corpse was destroyed partly by bullets and partly by birds," says Elman Memmedov, an Azerbaijani politician, as he recalled one of the most horrifying events of the century, the Khojaly Massacre, which took place 27 years ago today.

On Feb. 26, 1992, 613 Azerbaijani civilians were killed brutally by Armenian forces in Khojaly, a small town in the country's upper Karabakh region, according to official numbers.

Approximately, 106 of these 613 victims were women, while 83 were children. Post-examination of the incident proved that the victims were not only killed but also tortured in inhumane ways. According to reports by some foreign journalists who were on duty at the region at that time, people's skin had been flayed and their eyes scratched out.While a large portion of the international community remains silent over the incident, Human Rights Watch describes it as a "massacre."

"I could only identify my mother's corpse by her dress, which she was wearing that day," Memmedov, a local of Khojaly, which was home to more than 11,000 residents, said on Sunday during a commemorative event in Istanbul.

The roots of the dispute between Azerbaijan and Armenia over the Nagorno-Karabakh region, which was autonomous at that time, date back to 1988. At the time, Armenian locals in the region demanded to be separated from Azerbaijan and join Armenia. 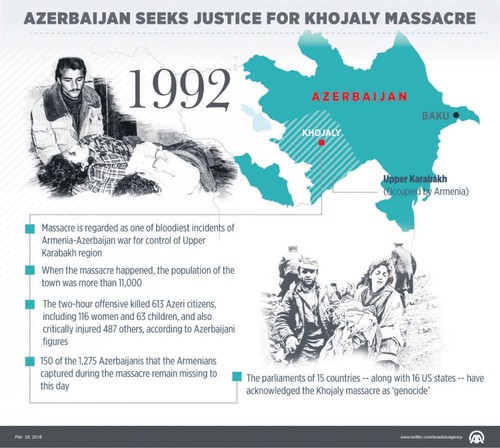 Thanks to Russian support, the Armenians quickly increased their domination over the region. First, they took control over Khankendi (Stepanakert) province, which acts as the capital of the region. Khojaly, on the other hand, became the second target of the Armenian government particularly due to its strategic location on one of the highest hills of the region. Currently, three U.N. Security Council resolutions and two U.N. General Assembly resolutions refer to Karabakh as being part of Azerbaijan, and the Parliamentary Assembly of the Council of Europe refers to the region as being occupied by Armenian forces.

Although it's been 27 years since the incident, no Armenian has faced trial over the massacre while there is still no information on what happened to the 150 captives, 28 of whom were children. Today, nine states recognize the massacre as a genocide, which was first declared by the Azerbaijani Parliament in 1994.

Turkey, as one of the closest allies of Azerbaijan, has always been there for the Azerbaijanis through commemorations every year and the condemnation of Armenia for its actions. "It is clear that the Khojaly Massacre is a result of Armenia's policy of systematic genocide and ethnic cleansing of Azerbaijanis," said Şamil Tayım, a Justice and Development Party (AK Party) deputy and head of the Turkey-Azerbaijan interparliamentary Friendship Group.

Speaking at a press conference at the Turkish Parliament, Tayım said that one-fifth of Azerbaijani territories are still under the occupation of Armenia, which has caused more than a million Azerbaijanis to be displaced.

The Turkish Parliament's Foreign Affairs Committee also called on international organizations to address the Khojaly Massacre yesterday. "We stand in solidarity with our Azerbaijani brothers and sisters in their rightful cause. We, hereby, reiterate our call for the perpetrators of this act to be brought to justice per international law and for Armenia to withdraw as soon as possible from the Azerbaijani territories it has occupied," the statement expressed.

The Turkish Embassy in Baku was another Turkish entity that commemorated the victims of the Khojaly Massacre on Saturday. The Khojaly Massacre should never be forgotten, said Turkish Ambassador to Azerbaijan Erkan Özoral, in a speech at an event organized by the Turkish Embassy and the Azerbaijan-Turkey Business Association (ATIB). However, apart from Turkey's siding with the Azerbaijanis, the remainder of the international community seems to be largely silent over the incident.

According to Refik Turan, a historian from Gazi University, large states frequently avoid "seeing the truth."

Turan, the head of the Turkish Historical Society (TTK), said such massacres continued in later years as well. Yet, Turan added, larger states continue to keep their silence.

There are still some within the international community, such as the Organisation of Islamic Cooperation (OIC), which recognize the incident as genocide while commemorating it every year.

Yousef bin Ahmed Al-Othaimeen, secretary-general of the OIC, paid tribute to "all those who lost their lives in the 1992 atrocity," according to a statement on Sunday.

Al-Othaimeen said the massacre in Khojaly was the result of "the illegal occupation of Azerbaijani territory by Armenia."

He also cited the final communique of a 2013 OIC meeting characterizing the acts against civilians in Azerbaijani territories as "war crimes, crimes against humanity and genocide."