Syrian Turkmens in Turkey cling to normal life with football 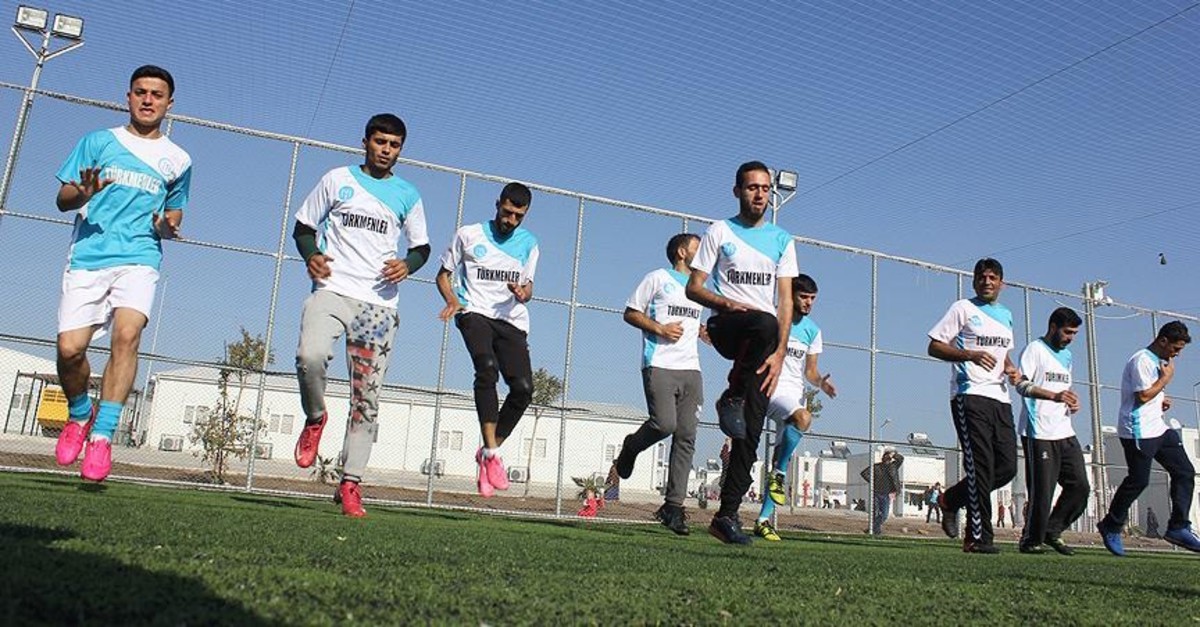 Syrian Turkmen refugees in u0130zmir province formed a team that operate under the Syrian Turkmen Sports Foundation.
by Tuğçe Kılıç Mar 08, 2019 12:59 am

Football has come to the forefront as a factor that has helped ease the integration of Syrian refugees into Turkish society. Various refugee groups, including Syrian Turkmens, have formed football teams and strengthened their ties with locals

Long after fleeing to Turkey from their ravaged country to leave behind the atrocities inflicted by the warring parties, Syrian Turkmens gathered together and formed football teams to help the younger generation cope with the struggle. Today, they compete in tournaments to relieve themselves from the stressors of daily life.

Turkmens, mainly from northern Syria and areas near the Turkish-Syrian border, have formed their own football teams throughout Turkey in provinces such as Osmaniye, and Hatay as a means to integrate into Turkish society. One of these teams formed by Turkmens refugees is in İzmir and operates under the Syrian Turkmens Sports Foundation.

Visiting one of their practices, the head of the Syrian Turkmen Assembly, Muhammed Vecih Cuma, noted that sporting activities are very valuable for the Turkmens refugee community living in Turkey, as it is an essential part of social and daily life. Cuma pointed out that the Turkmens are one of the refugee communities that are most willing to integrate and contribute to society.

Another football team was formed by Syrian refugees living in container refugee camps in Osmaniye province, which is located near the Syrian border, to spend quality time and to have fun. The team holds practices at one of the camps in football fields built by Turkish authorities.

A tournament in the city was organized by former Syrian Football Federation Deputy President Abdullah al-Nasır in August 2018. Football teams from Gaziantep, Kahramanmaraş, Adana, Mersin, Osmaniye and Kilis provinces as well as the İskenderun and Dörtyol districts of the border city of Hatay participated in this competition set up especially for refugees.

"Promoting Social Harmony and Dialogue through Football," initiated by a Turkish nonprofit organization, brought together Turkish and Syrian children in Hatay on a football pitch for weekly games and training under professional coaches. Some 140 children, about 70 Syrian and 70 Turkish youth, between the ages of eight and 17 took part in the project for the three-month program to strengthen Syrian refugee ties with Turkish society.

Since 2011, Turkey has received a constant flow of displaced Syrians fleeing the conflict. The number of refugees in the country increased from mere thousands to more than 3.5 million, by far the highest number among refugee-hosting countries. Women and children make up the majority of refugees. According to the Public Auditing Agency (KDK), some 276,158 Syrians were born to refugee families in Turkey between 2011, the year the war broke out, and 2017. So far, Turkey has spent more than $30.2 billion on their well-being.

Integration remains key to improve the lives of Syrians in Turkey as experts point out that the conflict is likely to continue for a long time, dimming the prospect of a return home. The KDK report says the population of Syrians living in Turkey may increase to 5 million in 10 years, drawing attention to the fact that even though the war may end in Syria, many Syrians in Turkey could decide not to return home.

Commenting on sporting facilities and activities in the Syrian territories liberated by the Turkish military from all terrorist elements, Cemil Doğaç İpek, an academic and coordinator at the Syrian Turkmen Assembly, noted that the regime has not established any in northwestern Syria's Afrin or in other territories under the control of Turkey-backed forces. Yet, he said, Ankara has built various stadiums and sport halls in a short time.

"We have built several facilities in the territories secured by Turkey with the help of Ankara. These facilities enabled us to protect our youth from harmful practices and ideologies. Thanks to these facilities our youth can engage in support and look forward to the future to come," İpek said.

The Turkish military and the Free Syrian Army (FSA) launched Operation Euphrates Shield in August 2016 and Operation Olive Branch in January 2018, eradicating the presence of the YPG and Daesh terrorists near Turkey's borders. Since then, Turkish authorities have launched many initiatives to bring daily life back to normal in these areas. The cities witnessed a rapid recovery in terms of infrastructure, education, health services and security in areas liberated by Turkish and FSA forces. Aside from humanitarian and infrastructural support, Ankara and Turkish nongovernmental organizations (NGOs) have been striving to increase local people's participation in social activities, including sports and arts, to normalize their lives. Football is also part of this, and it was one of the things prohibited by Daesh along with many other activities during its grip in the area.

Pointing out that a lot of Syrian Turkmens refugees desire to go home when security is ensured in their hometowns, Cuma added that for this reason, building sports facilities where locals can benefit is significant.

Furthermore, İpek highlighted that his assembly has been in discussions with İzmir's Karşıyaka Sports Club to kick off joint sports projects.

A stadium in northern Syria's al-Bab was destroyed in the civil war and later fully renovated by Turkey's Directorate of Youth and Sports, which operates in the city and in al-Rai. Along with the establishment of football training centers, football teams, including Çobanbey, Azez and Karakeçililer, were formed in the liberated territories. In January 2018, a football tournament was held in al-Bab, with football teams from eastern and northern Syrian territories attending as part of Turkey's efforts to normalize life in the region following a successful military operation.