Erdoğan: Every citizen, regardless of their ethnic roots, part of Turkish nation 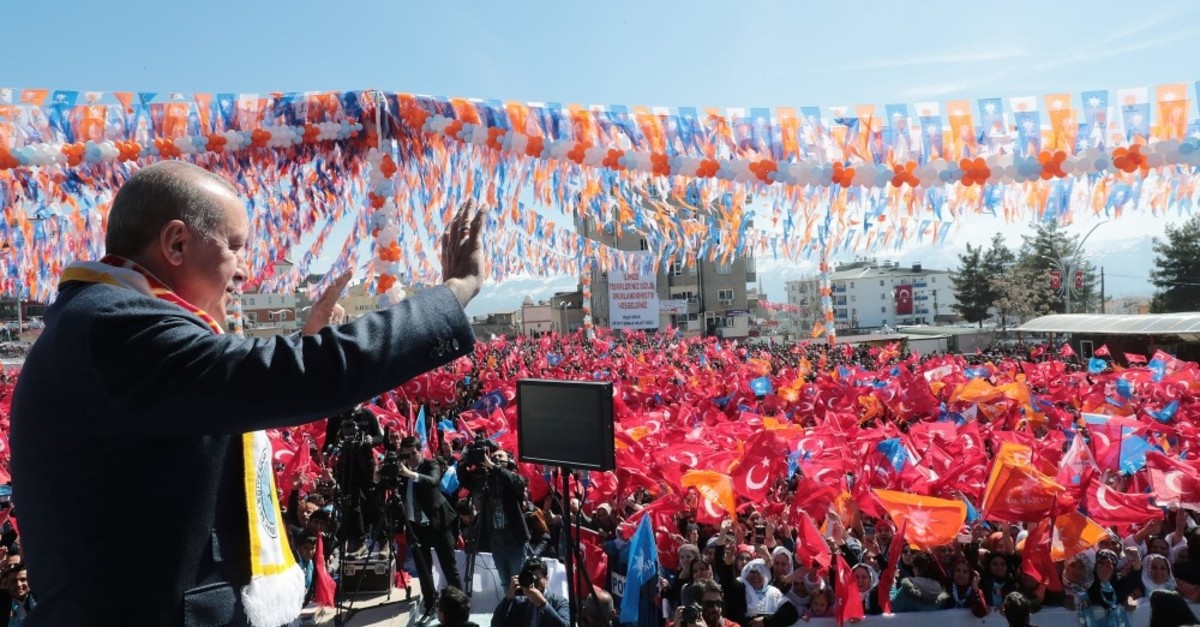 The president reiterated the importance of the notion of one nation, one state, one motherland and one flag, saying that there is no tolerance for any kind of discrimination toward any ethnic group

Everyone iving in Turkey, from Turkish to Kurdish and from Arabs to Bosnians, disregarding their ethnic roots, are considered as the same nation, President Recep Tayyip Erdoğan said yesterday.

Speaking at a rally in southeastern Şırnak province, which is known for its Kurdish population, Erdoğan said the Turkish flag represents the joint struggle of all these ethnic groups' ancestors.

"Any kind of discrimination and divisive attitude are disregarded by us," Erdoğan said, putting emphasis on the notion of one nation, one flag, one motherland and one state.

Saying that Turkey is a country where the ones in trouble seek refuge, Erdoğan underscored that refugees have never been discriminated against because of their ethnic roots.

"Where did the ones who fled Kobani go? Right now, there are 300,000 people in Turkey who came from Kobani. We have never referred to them as 'Kurds.' We have said that if they had to flee Syria, then we have to host them," the president said. Since 2011, Turkey has received a constant flow of displaced Syrians fleeing the conflict and their numbers have expanded from mere thousands to millions. Currently, there are over 3.5 million Syrian refugees in Turkey, which is the highest number in the world. Over 475,000 of these Syrian refugees came from areas controlled by the PKK's Syrian affiliate, the People's Protection Units (YPG), while another 300,000 fled from the atrocities of the terrorist organization and took shelter in Iraq. Most of these refugees are ethnically Kurdish.

The president further expressed that there is no other motherland than Turkey and the ones who seek for another state can go wherever they want, referring to latest remarks of opposition parties in which they used the word "Kurdistan" to define the eastern Anatolia although there is no region with such a name in the country.

"If you really want a Kurdistan, there is one in northern Iraq, goodbye to you. There is no such region in Turkey," the president said regarding the issue during his rally in southeastern Hakkari province just after Şırnak, adding that no one can divide Turkey. "We do not have the luxury to lose yet another son to terrorist organizations," Erdoğan expressed, referring to Şırnak's past sufferings from the PKK. "A new Şırnak... Didn't they [the PKK] burn down all of our houses here?" Erdoğan asked, adding that despite all the destructive actions of the terrorist organization, Şırnak has been rebuilt and not a single citizen has suffered thanks to the immediate action of the Justice and Development Party (AK Party) government. "We have ruined the plans of the ones who want our nation to suffer and improved our city's conditions, made it more beautiful," Erdoğan said.

Erdoğan underlined that provinces like Şırnak know best what a terrorist organization can cost for the people, which is why it also knows best the meaning and value of peace, services, investments and employment. "In the last 17 years, we have made a total of TL 10.5 billion worth of investment in Şırnak," Erdoğan said, stating that 10-20 years ago the province was known for its large amount of garbage, muds and holes.

He further said that they have provided TL 2.5 billion worth of monetary assistance to old and disabled citizens as well as those who were relatives of martyrs. Besides, Erdoğan said, they, as the AK Party government, they gave TL 3 billion worth of investment incentives to the investors in the province and provided employment to 7,885 people.

Following his rally, Erdoğan had talks with Indian Prime Minister Modi over the phone, and discussed bilateral ties and developments along the India-Pakistan border.