As Turkey unites, those with bad intentions will fail: Erdoğan 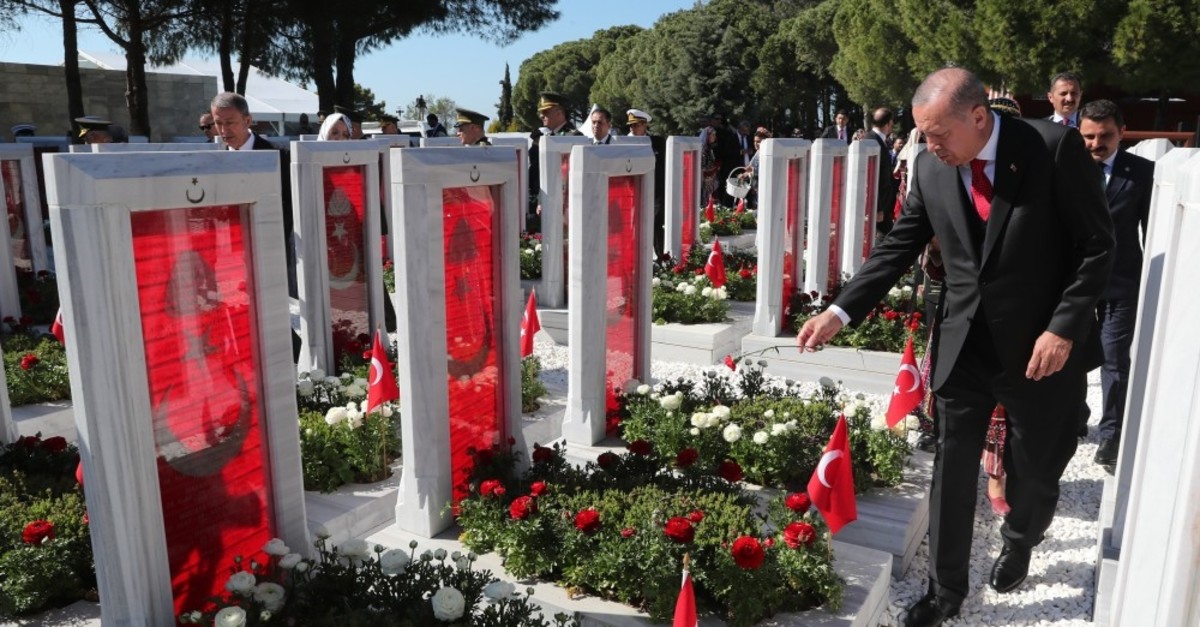 Speaking at the commemoration of the 104th anniversary of the Battle of Çanakkale, President Recep Tayyip Erdoğan emphasized the importance of unity, solidarity and brotherhood in the spirit of the Turkish nation

President Recep Tayyip Erdoğan reiterated his emphasis on the unity of the country, saying that all segments of Turkish society have come together and are one.

The president made it clear that Turkey is "strong and those who want to divide it are doomed to fail." "Let's not let our unity, solidarity and brotherhood be overshadowed," Erdoğan said Monday in the western province of Çanakkale, where he was attending a commemoration ceremony of the Çanakkale battle. Monday was the 104th anniversary of the day when Ottoman Turkish troops managed to stave off occupying forces during World War I, a move that delayed the collapse of the Ottoman Empire and contributed to patriotic fervor that sparked the post-WWI fight for independence.

The day is officially known as March 18 Çanakkale Victory and Martyrs Day, when all fallen soldiers and civilians who died in wars, terror attacks and counter-terrorism operations are remembered. The remembrance events culminate in a national park in Çanakkale where cemeteries for thousands of the fallen are located and traditionally, a military parade is held.

"We are here in Çanakkale, from Thrace to Anatolia, as Turks, Kurds, Arabs, Circassians, Bosnians and Romany people. We have been here for a thousand years and we shall be in here till the end," Erdoğan underlined. Commemorating the Battle of Çanakkale, the president said that the ones who do not understand the struggle that took place in Çanakkale, cannot understand the current fight of the country either.

"The ones who think that the Battle of Çanakkale was yet another ordinary war, are the ones who have no relation with this country, nation and territory," he emphasized, adding that these people have no right to say even a single word about neither this country nor this nation. "The Turkish nation, commemorates the 104th anniversary of the Çanakkale victory with great pride and excitement and once again remembers each and every hero with respect and gratitude, first and foremost Gazi Mustafa Kemal, who entrusted these lands to us, on the occasion of March 18 Martyrs' Day," the president said on Sunday, releasing a statement on the issue.

The events leading up to the momentous battle started on February 1915 when Britain and France decided to launch the Gallipoli (Gelibolu) Campaign to knock the Ottoman Empire out of the war as quickly as possible by reaching and capturing its capital. They started their attack on March 18, but the waters were filled with a network of mines laid by Ottoman vessels. On April 25, Allied soldiers landed on the shores of the Gelibolu Peninsula. The troops were as there part of a plan to open the Çanakkale Strait on Turkey's Aegean coast to Allied fleets, allowing them to threaten the Ottoman capital. The Allied forces, however, encountered strong and courageous resistance from the Turks and the campaign turned out to be a costly failure.

Tens of thousands of Turkish nationals and soldiers died, along with tens of thousands of Europeans, plus around 7,000-8,000 Australians and nearly 3,000 New Zealanders, referred to collectively as the Anzac troops. Victory against the Allied forces boosted the morale of the Turkish side, who then went on to wage a war of independence between 1919 and 1922 and eventually formed a republic in 1923 from the ashes of the old empire.

Regarding the recent anti-Muslim attacks in the western world, particularly in New Zealand which took place last week and killed 50 people, Erdoğan expressed that Turkish citizens abroad are also being tested through these attacks.

"This is not an individual but an organized incident," the president highlighted.

A 28-year-old terrorist, who is an Australian citizen of Scottish descent, killed 50 people in the Al Noor mosque and another mosque in the New Zealand city of Christchurch. More than 40 people are still being treated in hospital for injuries, including a 4-year-old child, after the terror attack, which is thought to be the deadliest directed against Muslims in the West in modern times.