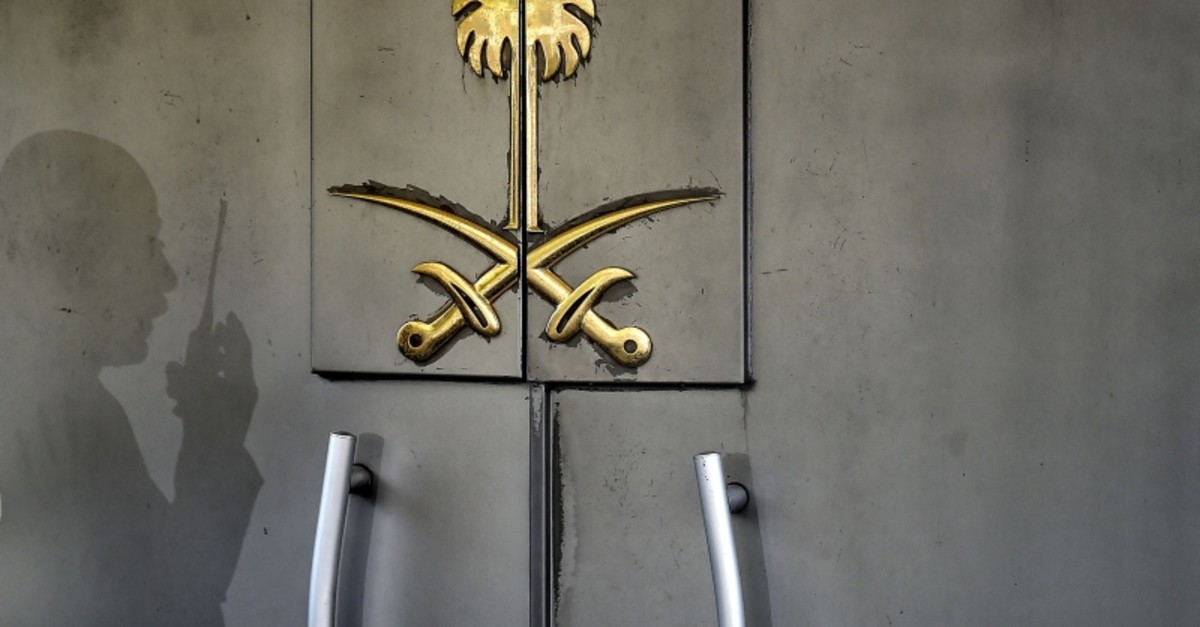 A shadow of a security member of the consulate is seen on the door of the Saudi Arabian consulate on November 1, 2018 in Istanbul. (AFP Photo)
by Daily Sabah with Agencies Apr 19, 2019 2:42 pm
Turkey arrested two intelligence operatives in Istanbul on Monday who confessed to spying on Arab nationals on behalf of the United Arab Emirates (UAE), one of whom is suspected of having connections to the murder of dissident Saudi journalist Jamal Khashoggi, who was killed more than six months ago by a Saudi hit squad.

Citing judicial sources, Anadolu Agency reported Friday that Turkey was investigating whether the arrival of one of those detained had connections to Khashoggi's murder in October last year.

Reuters also reported on Friday that according to a senior Turkish official, the two confessed to spying on Arab nationals for the UAE and that now Turkey is investigating whether their arrival in the country is related to Khashoggi's death. 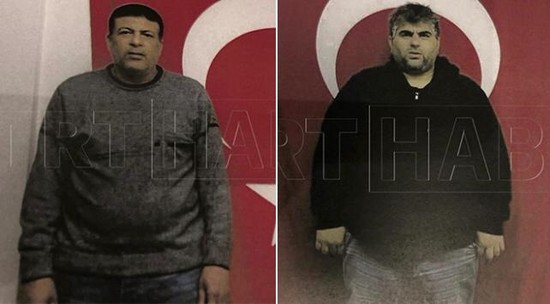 The two UAE nationals were detained as part of an investigation led by the Istanbul Chief Public Prosecutor's Office and the two were referred to a court to be arrested on charges of military, political and international espionage.

Khashoggi was killed in the kingdom's Istanbul Consulate on Oct. 2, 2018, by a team of 15, consisting of Saudi officials who arrived in Turkey for his murder and a cover-up team also in charge of dismembering Khashoggi's body.

It has also been reported that one of the two men arrived in Turkey in October 2018, only few days after Khashoggi was murdered inside Saudi Arabia's Consulate in Istanbul. Officials said that the other spy arrived later to assist his colleague.

"We are investigating whether the primary individual's arrival in Turkey was related to the Jamal Khashoggi murder," said the official, adding the person has been under surveillance for the past six months.

"It is possible that there was an attempt to collect information about Arabs, including political dissidents, living in Turkey," he further underlined.

During the arrests, Turkish officials also seized an encrypted computer located in a hidden compartment at what the official told Reuters was the spy ring's base.

The official, who requested anonymity, said statements by the detained men suggested their intelligence operation targeted political exiles and students.

The Daily Sabah learned that the suspects identified as S.S. and Z.H. also said that the aim of the spy ring was to create an anti-Turkey structure. S.S. came under the radar of Turkey's National Intelligence Organization (MIT) for his meetings and was taken under physical and technical surveillance, according to government officials. The MIT also detected that he was gathering information from his contacts in exchange for money.

The other suspect, Z.H., was sent to Turkey five months after to help S.S. resume his activities more comfortably. The two were found to be working until late at night on some days. When intel units concluded that S.S. and Z.H. were conducting espionage activities, the MIT and Istanbul police held a joint operation Monday while the two were on their way to a rendezvous point.

The CIA concluded in October that Crown Prince Mohammed bin Salman (MBS) ordered the assassination of Khashoggi. However, U.S. President Donald Trump has disputed the CIA report and told reporters: "The CIA points it both ways. Maybe he did, maybe he didn't," a phrase he had used in a controversial statement released on the incident. When the reporter asked who should be held responsible for the killing, Trump responded, "Maybe the world should be held accountable because the world is a vicious place."

The UAE and Saudi Arabia are close Arab allies.