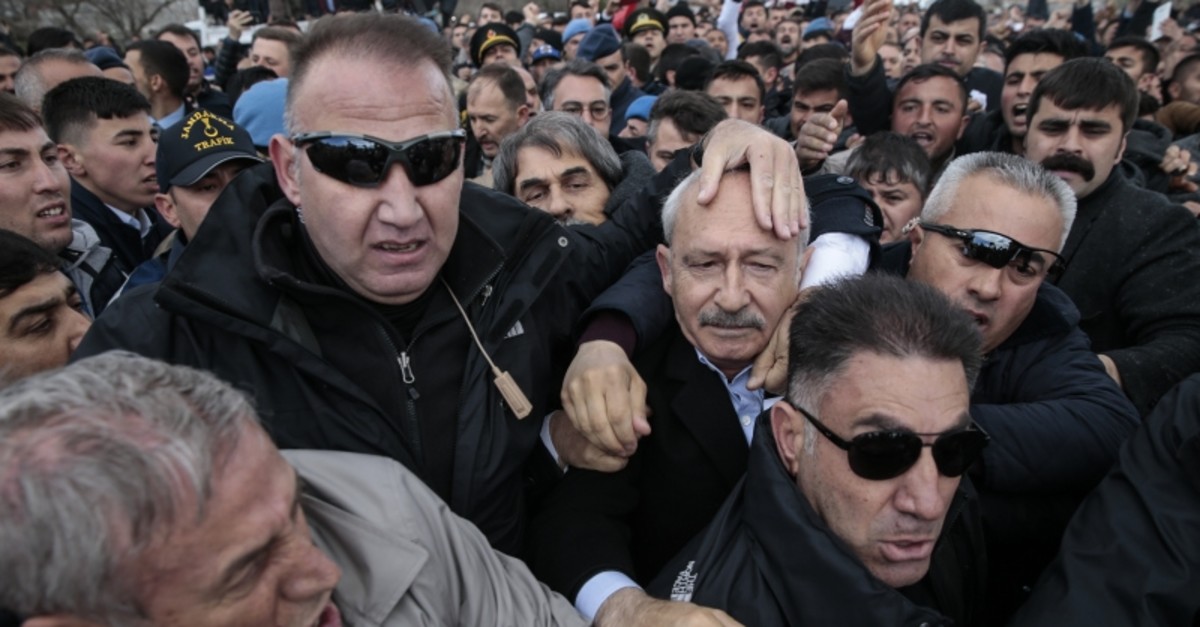 Main Opposition Republican People's Party (CHP) Chairman Kemal Kılıçdaroğlu was attacked by a group of men during the funeral of a fallen soldier who was killed while fighting PKK terrorists near the Turkey-Iraq border.

The attack took place in Turkey's capital Ankara when the group of men started protesting again Kılıçdaroğlu and punched and kicked him for his alleged secretive alliance with the pro-PKK Peoples' Democratic Party (HDP) during the local elections.

They were attending the funeral of Infantryman Yener Kırıkçı in Çubuk district.

Security forces escorted the Kılıçdaroğlu to a nearby house after the attack. Later he was driven by armored vehicle away from the scene.

The ruling Justice and Development Party (AK Party) officials condemned the attack and wished a speedy recovery for Kılıçdaroğlu.

"We are against all types of violence, nobody has the right to damage the atmosphere of peace in Turkey," President Recep Tayyip Erdoğan said in response to the attack.

"We condemn all types of violence," party spokesman Ömer Çelik said, adding that the perpetrators will be found and held accountable for their crime.

Justice Minister Abdülhamit Gül also condemned the attack, saying that they will not allow violence to cast a shadow on politics.

Nationalist Movement Party (MHP) Chairman Devlet Bahçeli said it was "impossible" to be comfortable with the attack against Kılıçdaroğlu.

Ankara governor Vasip Şahin told a local broadcaster a legal action against the attackers has been initiated.

Yüksel Kocaman, Ankara's chief public prosecutor, told Anadolu Agency that a probe was launched against the attackers and to ascertain whether it was a terror act or an act of provocation.

Some HDP members have been charged with or accused of having links to the PKK terrorist organization that has been fighting the Turkish state for more than 30 years, leaving more than 40,000 dead.

Ankara Governor's Office has released a statement saying that an investigation has been launched to find the perpetrators and precautions have been taken to ensure the safety of Kılıçdaroğlu.