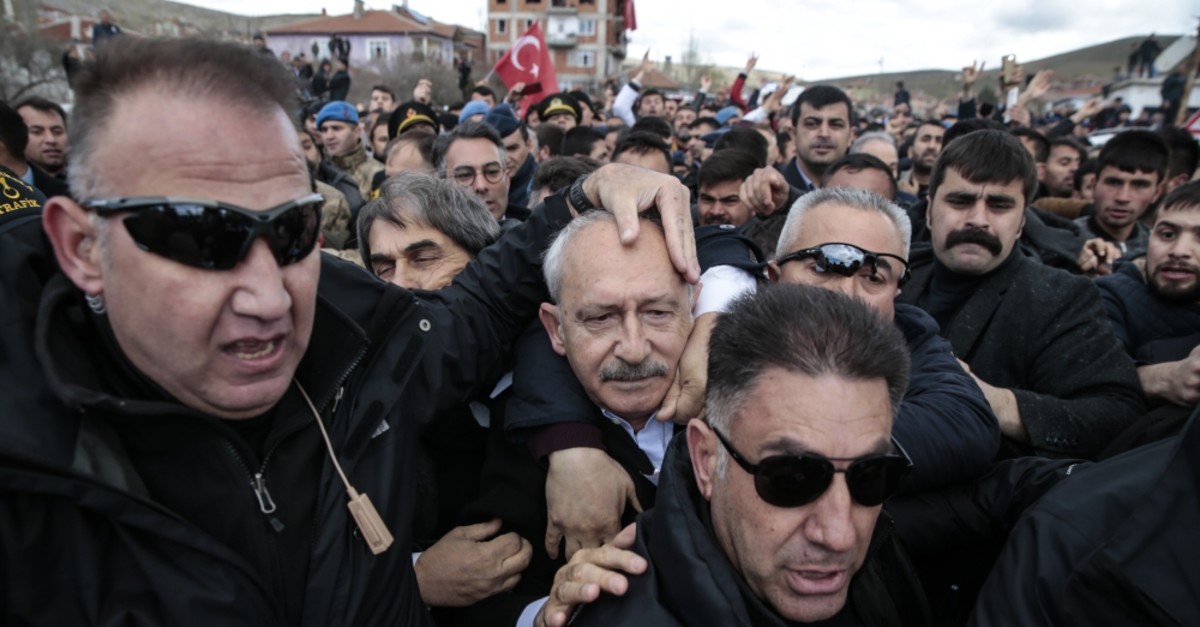 President Erdoğan condemned the attack, opposing any kind of violence. The Ankara Chief Public Prosecutor's Office has launched a probe against the attackers

After a group of protesters attacked the main opposition Republican People's Party (CHP) Chairman Kemal Kılıçdaroğlu during a soldier's funeral on Sunday, all political parties and officials strongly condemned the act, calling for calm as a probe was launched to look into the incident.

"Unfortunately, undesirable incidents took place at the funeral of a martyr. Protests against Kılıçdaroğlu turned into violent action. The incident is being investigated in every aspect. We stand against all kind of violence and terror," President Recep Tayyip Erdoğan said yesterday.

The attack took place at the funeral of a fallen soldier who was killed while fighting PKK terrorists near the Turkey-Iraq border. A group of men started protesting against Kılıçdaroğlu and later punched and kicked him for his alleged secretive alliance with the pro-PKK Peoples' Democratic Party (HDP) during the local elections. Security forces escorted Kılıçdaroğlu to a nearby house after the attack. Later, he was driven by an armored vehicle away from the scene. Ankara's chief public prosecutor's office launched a probe against the attackers. Within the scope of the probe, 11 people who assaulted Kılıçdaroğlu were identified, and nine of them were taken into custody. Three of them were released later in the day.

The prosecutor's office also announced yesterday that Osman Sarıgün, who punched the CHP leader, was arrested in Istanbul's Silivri area. The written statement issued by the prosecutor's office underlined that the identities of the attackers and the incident are being meticulously investigated. Reportedly, the investigation is based on the charges of "defamation of public officials for his/her duty," "bodily harm" and "inciting the public to commit a crime," while the attackers' affiliations with terrorist organizations are also being looked into.

Interior Minister Süleyman Soylu also condemned the attack in a press briefing held yesterday. Criticizing the remarks of CHP officials in the aftermath of the attack alleging that the attack was organized, Soylu noted that the ministry has not identified an organized action or a provocative action stemming from outside of the martyrs' family and friends, contrary to the allegations.

Noting that the CHP's open cooperation with the HDP still remains fresh in the minds of the people, Soylu underscored that blaming security forces for the reaction of the public is illogical. He added that actions such as urging demonstrations are inappropriate and will only serve to politicize the incident.

Some HDP members have been charged with or accused of having links to the PKK terrorist organization that has been fighting the Turkish state for more than 30 years, leaving more than 40,000 dead.

In addition to Erdoğan, the assault on Kılıçdaroğlu drew a wide range of reaction from the leaders of political parties and political figures.

The chairwoman of the far-right İP, Meral Akşener, visited Kılıçdaroğlu to convey her wishes of a quick recovery, while Deputy Parliament Speaker Levent Gök, a CHP deputy, called for Parliament to take action to ensure the preservation of democracy. Justice Minister Abdulhamit Gül condemned the attack on Sunday, saying that they will not allow violence to cast a shadow on politics.

"We found out that Osman Sarıgün, one of the attackers in the incident against Kılıçdaroğlu, is a member of our party. Our party's Ankara Provincial Administrative Board decided to refer Sarıgün to the provincial disciplinary board with the request of his absolute dismissal," Justice and Development Party (AK Party) spokesperson Ömer Çelik said yesterday on his official Twitter account.

Subsequent to the attack, the CHP's Central Executive Board (MYK) convened an extraordinary convention in the aftermath. During the meeting, Kılıçdaroğlu invited all parties to keep a level head and disregard such provocative acts. The provincial party organization announced via Twitter accounts that they will organize small-scale demonstrations all over the country in protest of the attack. Accordingly, party members gathered Monday at 12 p.m. in Istanbul, Ankara and Izmir. In relation to the issue, Kılıçdaroğlu told the Anadolu Agency (AA) yesterday that this attack was planned and that the security measures were insufficient. Mentioning other previous attacks against him, Kılıçdaroğlu emphasized that the main objective behind these attacks was to push the CHP to take to the streets.

Touching on the matter, CHP Group Deputy Chairman Engin Özkoç regarded the attack as attempted first-degree murder since numerous punches and kicks targeted Kılıçdaroğlu. Özkoç also said that there were an inadequate number of security forces at the scene.