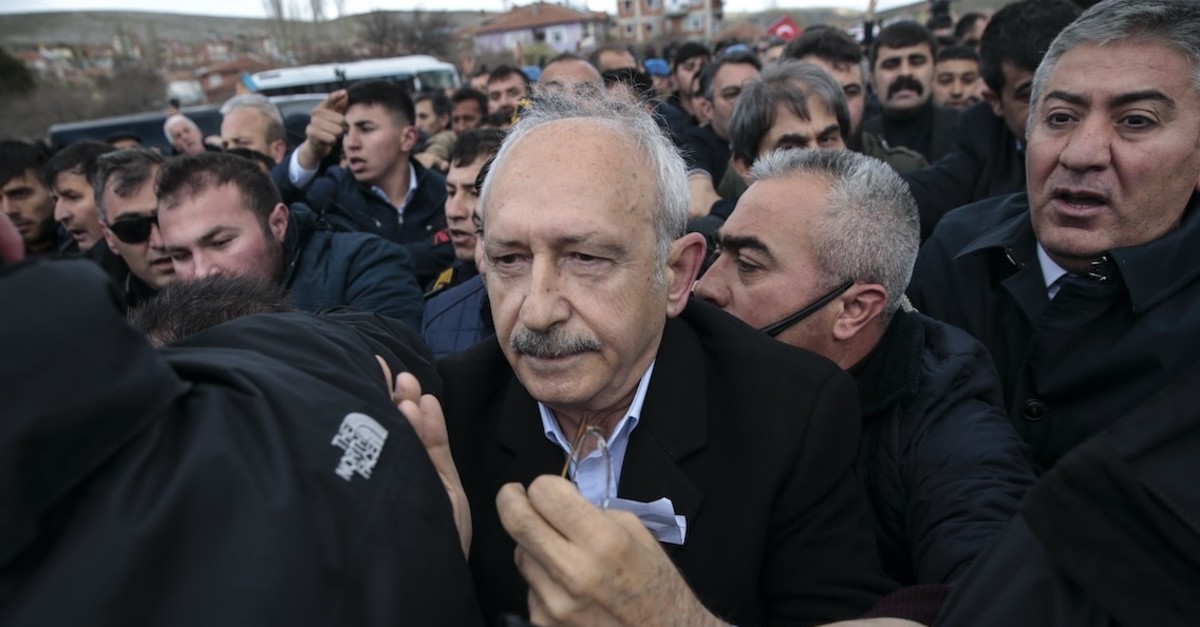 An inquiry into the assault of Republican People's Party (CHP) Chairman Kemal Kılıçdaroğlu at a funeral Sunday is still in progress, as some of the suspects were released and the main perpetrator's detention extended.

The inquiry was launched by the Ankara Chief Prosecutor's Office following the incident. Meanwhile, the CHP leader pressed charges yesterday against the attackers via his attorney Celal Çelik. Within the scope of the probe, 11 people who assaulted Kılıçdaroğlu were identified and nine of them were taken into custody.

Three of them were released by the prosecution office while five of them were released by the court on the condition of judicial control. The detention period of Osman Sarıgün, who punched the CHP leader, on the other hand, was extended by the court. The attackers are charged with "defamation of public officials for his/her duty," "bodily harm" and "inciting the public to commit a crime."

Kılıçdaroğlu was attacked during the funeral of Yener Kırıkçı, who was killed by PKK terrorists near the Turkey-Iraq border. A group of men started protesting against Kılıçdaroğlu and later punched and kicked him apparently in reaction to his party's secretive alliance with the pro-PKK Peoples' Democratic Party (HDP) during the local elections.

Accordingly, the CHP yesterday tabled an investigation motion in Parliament to shed light on the matter, identifying the responsible parties and reasons for security vulnerabilities. Pointing out that the attack was organized and a provocation, the motion accused security forces of standing idle in the face of attacks and allowing attackers to move forward.

Criticizing Interior Minister Süleyman Soylu for his remarks suggesting that the assault was not organized but a result of the resentment of relatives of the martyr due to the CHP's alleged cooperation with the HDP, the motion said "the fact that a minister made such statements protecting criminals before the end of the investigation gives the impression that there is an attempt to cover up the assault."

President Recep Tayyip Erdoğan denounced the attack, saying he was against all kinds of violence. He also criticized CHP's attempt to turn the incident into a political issue. "You need to be careful while visiting a funeral of a martyr. There is no meaning to exploit the matter. Whenever I go to one of these funerals, I ask myself whether my presence will cause discomfort or not."

The Nationalist Movement Party (MHP) Chairman Devlet Bahçeli on Monday condemned the attack regardless of its source and motivation, calling the assault as "unacceptable."

He called for an extensive investigation into the matter to reveal every detail. Bahçeli underlined that CHP's statements following the assault will only push the country toward polarization and disorder.

"Nobody can point at our party as the hidden perpetrator or instigator of this attack. The CHP's irresponsible policies have laid the foundations of such security vulnerabilities," Bahçeli added.

The CHP has long been criticized for its unofficial alliance with the pro-PKK HDP. The CHP has refrained from officially including the HDP, which has been condemned for its close ties with the PKK, in its electoral alliance with the Good Party (İP) amid fears of a possible backlash from its secular-nationalist voter base. Some HDP members have been charged with or accused of having links to the PKK terrorist organization that has been fighting the Turkish state for more than 30 years, leaving more than 40,000 dead.

Touching on the issue, Presidential Communications Director Fahrettin Altun stressed that the judicial process has already been initiated however he will not accept CHP's rhetoric viewing the citizens as terrorists due to its cooperation with pro-PKK HDP.

It is not possible for us to approve or overlook any kind of violence, Defense Minister Hulusi Akar also said yesterday.

Previously, CHP Istanbul Province head Canan Kaftancıoğlu hinted that they will employ its own security detail to protect Kılıçdaroğlu since the state's intuitions failed to do so.