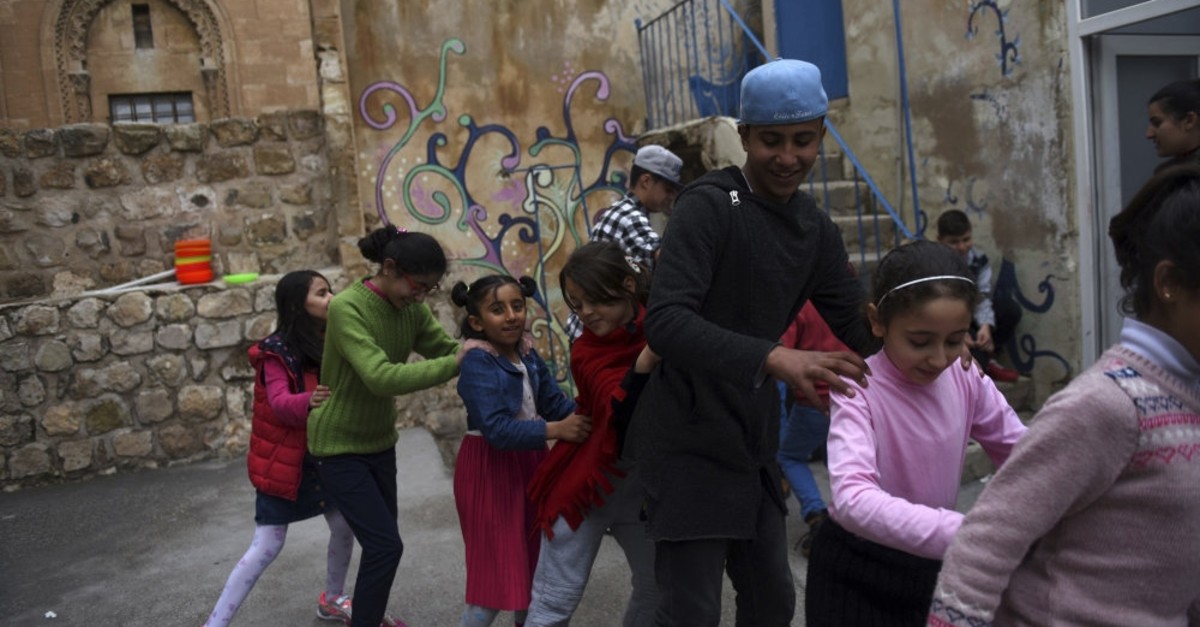 NGOs prioritize the integration of refugee children through education, financial support and cultural activities as well as with social and health services

Helping refugee children forget about their hardships and look ahead to what the future holds for them, Turkish nongovernmental organizations (NGOs) are trying to organize diverse activities to enhance the social and cultural integration of children. As a part of these efforts, the Third Children's Festival was organized on Friday by the Association for Solidarity with Asylum Seekers and Migrants (ASAM) on the occasion of the April 23 National Sovereignty and Children's Day and the 30th anniversary of the Convention for Children Rights' acceptance.

The event organized for enhancing friendship between Turkish and refugee children saw the attendance of 5,000 children in addition to their families. Children had a pleasant time by participating in numerous activities ranging from music, visual arts, creative activities and stage performances for the entire day.

In addition to education, financial support, social and health services, cultural activities are coming to the fore to cement social cohesion between refugee and Turkish children, as there is no end in sight to the Syrian conflict.

Commenting on the issue, ASAM General Coordinator İbrahim Vurgun Kavlak told Daily Sabah that the association regularly prepares social activities and joint workshops along with other projects. In these activities, foreign national refugees and Turkish children get together and enjoy cultural and artistic activities.

Speaking to Daily Sabah, the UNICEF representative in Turkey, Philippe Duamelle, also underscored that integration is a two-way process and civil organization centers, like ASAM, provide places for refugee children and Turkish children to socialize since these centers are open all the time.

Since 2011 when the conflict in Syria triggered the worst humanitarian crisis since World War II, Turkey received a constant flow of displaced Syrians fleeing the conflict, and their numbers have expanded from mere thousands to millions. Currently, Turkey hosts the largest number of refugees with over 3.5 million Syrian refugees and many more refugees from Iraq, Afghanistan, Iran and Somalia. Ten cities host some 2.8 million refugees, while others are scattered around the country, and nearly 1.6 million of the Syrian refugee population are children in Turkey, and nearly 300,000 Syrians have been born in Turkey since 2011.

To address the challenges and prevent these children from becoming a "lost generation" and equip them to re-build their own countries in the future, the Turkish government and many Turkish NGOs have long been exerting efforts to meet the needs of refugees.

Following their first arrival in the country, psychological support and parenting programs were comprehensively provided for children and their families as the children have experienced war and suffering first hand; they risk violence, developing psychological disorders, child marriage and recruitment into armed groups, too.

Education is another area that needs to be strongly addressed as children miss out on education in war-torn areas and during displacement. Thus, the Ministry of National Education and UNICEF constructed 43 schools and Temporary Education Centers (TECs) and renovated 218 of them since the beginning of the conflict. Initiatives such as the Conditional Cash Transfer for Education (CCTE) Program for Syrians and other refugees are also actively used as means to provide educational opportunities and keep students in school by providing cash support every two months to families whose child attends school regularly.

As a result of these efforts, the school enrollment rate for Syrian refugee children in Turkey reached approximately 85 percent this year with almost 650,000 Syrian children finding their way to school, a success amid efforts to prevent a generation of Syrians from going uneducated. Turkey has granted scholarships to 20,000 Syrian students last year alone, while work to reduce the number of 400,000 out-of-school Syrian children continues.

Children with disabilities are also one of the most vulnerable groups within refugee children. Touching upon the issue, ASAM Deputy General Coordinator Buket Bahar Dıvrak told Daily Sabah that they are carving out appropriate solutions by especially identifying the needs of different groups. Regarding disabled children, Dıvrak emphasized that the emergency line and outreach teams of organizations play a significant role in addressing these needs.