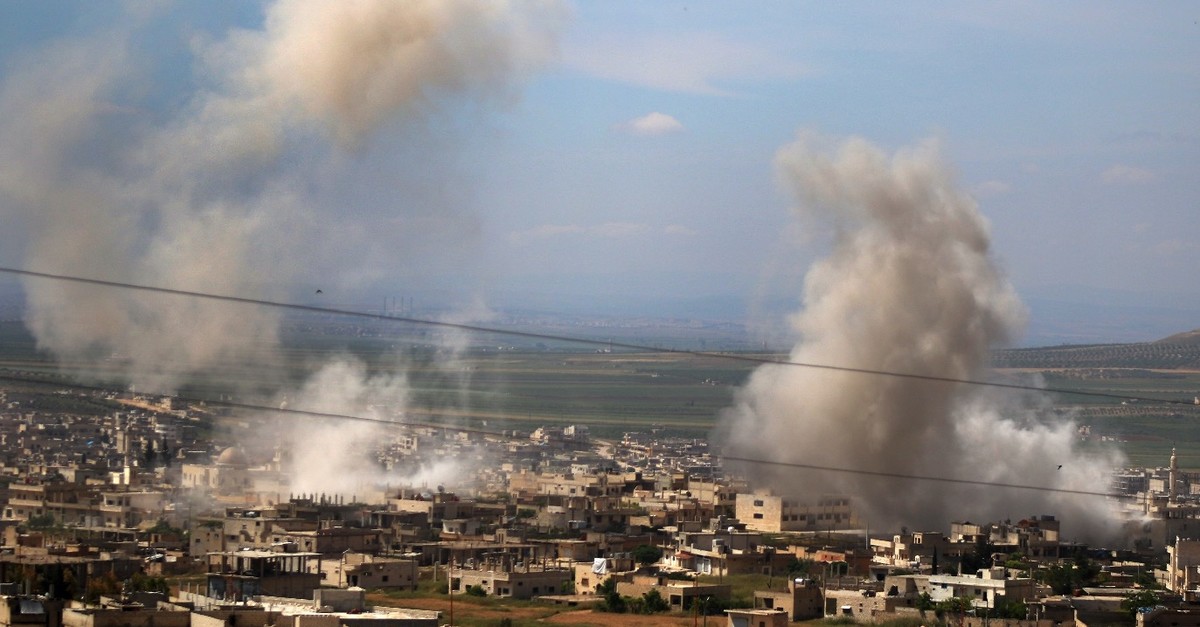 As the Assad regime prepares to intensify its attacks on Idlib, the international community continues to warn of an impending humanitarian catastrophe

The Bashar Assad regime is preparing an offensive in northwestern Syria's Idlib following eight months of calm provided by the Sochi deal reached between Turkey and Russia last September, which will likely cause new bloodshed and a wave of migration in the province. Syrian activists said the regime expanded its ground offensive on the outskirts of Idlib and Hama provinces over the weekend and took control of new villages amid calls to adhere to the cease-fire reached in the Sochi deal. The Britain-based Syrian Observatory for Human Rights confirmed that regime forces, which focused on areas at the southern edge of the last opposition stronghold Idlib, gained new ground.

A full-scale military offensive to recapture Idlib is expected to cause the most brutal fighting in Syria's civil war, which so far has killed close to half a million people and displaced millions of others. According to U.N. figures, around 6 million people have been displaced internally and another 5 million were driven abroad as refugees since the beginning of the civil war.

The new military campaign has already started to aggravate the humanitarian situation. According to various nongovernmental organizations, the Assad regime and Russian forces have dropped more than 3,000 bombs on Idlib in the past two weeks, which has led to the deaths of nearly 150 people and injured 248 others. Fleeing the intense airstrikes, approximately 100,000 new refugees have arrived at the Atmeh camp near the Turkish border in the last 20 days. It is estimated that nearly 800,000 people are being sheltered in tents and villages around the Atmeh camp.

Idlib is the opposition's last refuge. Its pre-war population of 1.5 million has swelled to around 3 million after it was designated a "de-escalation zone" under the Astana agreement between Turkey, Russia and Iran in May 2017, to pave the way for a permanent political solution in Syria. Tens of thousands of Syrians trapped in other parts of the country were evacuated there under various cease-fire agreements.

Defense Minister Hulusi Akar on Friday called on the Assad regime and Russia to abide by the borders of the de-escalation zone in Idlib agreed upon within the framework of the Astana process.

Akar said the actions of the regime and its allies are increasing civilian casualties and displacement, exacerbating the humanitarian crisis day by day. The attacks also pose a risk to the security of Turkey's observation points in the region, he added.

The Syrian civil war erupted in 2011 when the Assad regime responded harshly to protesters that poured into streets to demand more rights and freedom. While the regime lost control of significant parts of the country in the first years of the civil war, it recently recovered swathes of territories with the backing of Russian and Iran and is now eyeing Idlib on the way to a "final victory" against the Syrian opposition.

Assad forces have been using the pretext of Hayat Tahrir al-Sham (HTS) militants holed up inside Idlib to carry out intermittent attacks on the city, intensifying their attacks since April 26 despite that the agreement had turned Idlib into a de-escalation zone in which acts of aggression are strictly prohibited. Despite the regime building up a large number of military forces in villages near Idlib, some pundits think that the recent military campaign will be limited to regaining control of strategic highways, the M4 and M5, to clear the way between Hama and Latakia, which is home to a Russian air base.

The possibility of a new offensive has been sparking fears of a new humanitarian crisis among the international community. Last week, Germany, Belgium and Kuwait called for an urgent session of the U.N. Security Council on Syria as concerns grow over intense airstrikes targeting moderate opposition-held areas. The mobilization of local people has prompted fear of a new refugee crisis. This is not only a concern for Turkey, a country that already hosts nearly 4 million refugees, but would also have implications for Europe. It has been estimated that around a 500,000 people may arrive in Turkey, from where they might attempt to cross into Europe.

France's Ambassador to the U.N. Francois Delattre said Friday in a U.N. Security Council meeting that a repeat of the bloody Syrian battle that devastated Aleppo must be avoided at all costs. "We need to send a very clear message to all those who might be tempted by an escalation in Idlib," he said. The European Union also last week called for protecting the inhabitants of Idlib and ensuring humanitarian access to the province. "With the marked increase of airstrikes over Idlib province and northern Hama over the past weeks and days, we are once again running the risk of a dangerous escalation in Idlib," said a statement by the EU.

The head of the U.N. Commission of Inquiry on Syria warned Thursday that an all-out conflict in the Idlib province would likely increase human rights violations and generate a humanitarian catastrophe.

Paulo Pinheiro told a news conference that the current aerial and ground offensive by the Syrian regime and its allies "is a serious escalation" which has resulted in scores of civilian casualties and the displacement of over 150,000 people in just one week.

The U.N. World Food Program (WFP) also announced last week that it suspended humanitarian aid for 50,000 people in Idlib due to security concerns. WFP Spokesperson Herve Verhoosel called on the warring sides to protect civilians and abide by the Idlib agreement between Ankara and Moscow.