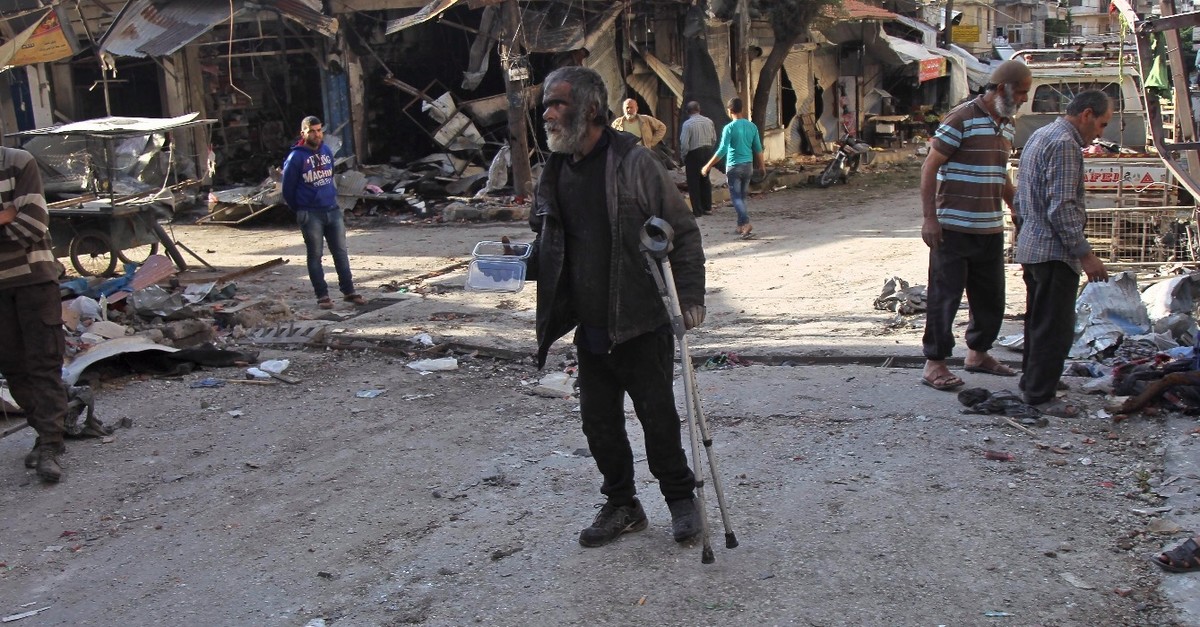 A Syrian man whose shop was destroyed in a regime aerial bombardment the previous day walks around the area in Idlib, May 15, 2019.
by Daily Sabah with Agencies May 16, 2019 12:08 am

Ankara stressed Wednesday that mounting regime bombardments on Syria's last opposition stronghold, Idlib, put at risk the political solution, which is in its final stages.

"First of all, the aggressive stance of the regime should change. The attacks should stop. At a time when the political solution talks are ongoing and a lot of ground was covered for the establishment of the Constitutional Committee, the aggressiveness of the regime may spoil everything," Foreign Minister Mevlüt Çavuşoğlu told reporters yesterday.

Pointing out that the guarantor countries, Iran and Russia have a responsibility to stop the regime, Çavuşoğlu emphasized that the reciprocal harassment on the ground should be investigated by a joint working group as soon as possible.

Following eight months of calm provided by the Sochi deal, the bombardment was reinitiated on April 26, killing and injuring hundreds of people. Within a week it displaced more than 150,000 people, leaving the province deserted. Residential areas were destroyed by indiscriminate attacks while numerous educational and health facilities collapsed or were rendered unusable after being targeted by airstrikes.

According to the Syrian Civil Defense group, also known as the White Helmets, rocket and mortar attacks by regime forces and allied Iran-backed foreign terrorist groups targeted yesterday the Kfar Dael district in western Syria's largest city of Aleppo during the pre-dawn-meal of suhoor. The attack killed three civilians while wounding 20 others.

"For the solution of the problem in Syria, we have to work with everyone, all actors," Çavuşoğlu said.

He underscored that efforts for a solution to the crisis include the establishment of a constitutional committee, peace talks being held in Geneva, Astana and Sochi and ensuring a cease-fire in Idlib.

In relation to the meeting between President Erdoğan and Russian President Vladimir Putin, Çavuşoğlu said the two leaders have agreed that a working group on Syria's northwest should convene as soon as possible.

Idlib, home to 1.5 million people, has been turned into a shelter for opposition fighters and their families who were evacuated from different parts of the war-torn country.

Being the last opposition enclave in Syria, Idlib has been protected from a massive regime offensive by the deal reached between Ankara and Moscow in September 2018. The deal established a cease-fire in Idlib on the condition that heavy arms and extremist groups would withdraw from the region.

Prior to the agreement, the Assad regime was signaling an expansive military operation against Idlib, after it recaptured three "de-escalation" zones out of four determined by the Astana process in Idlib, north of the central city of Homs, the Eastern Ghouta area outside Damascus and in the southern provinces of Daraa and Quneitra. However, despite the deal, the regime attacks on the last opposition enclave have been escalating for some time now, killing thousands of civilians with many others injured, fueling concerns that a new crisis will erupt. In such a case, a new refugee crisis is not only a concern for Turkey that hosts nearly 4 million refugees, but it would also have implications for Europe. It has been estimated that around 700,000 people may arrive in Turkey from where they might attempt to go to Europe. The establishment of the U.N.-backed constitutional committee in Syria is a way to find a political solution. The planned constitutional committee will be tasked to carve out Syria's post-war constitution, which is seen as a stepping ston