Erdoğan: No judicial institution should serve interests of any political party 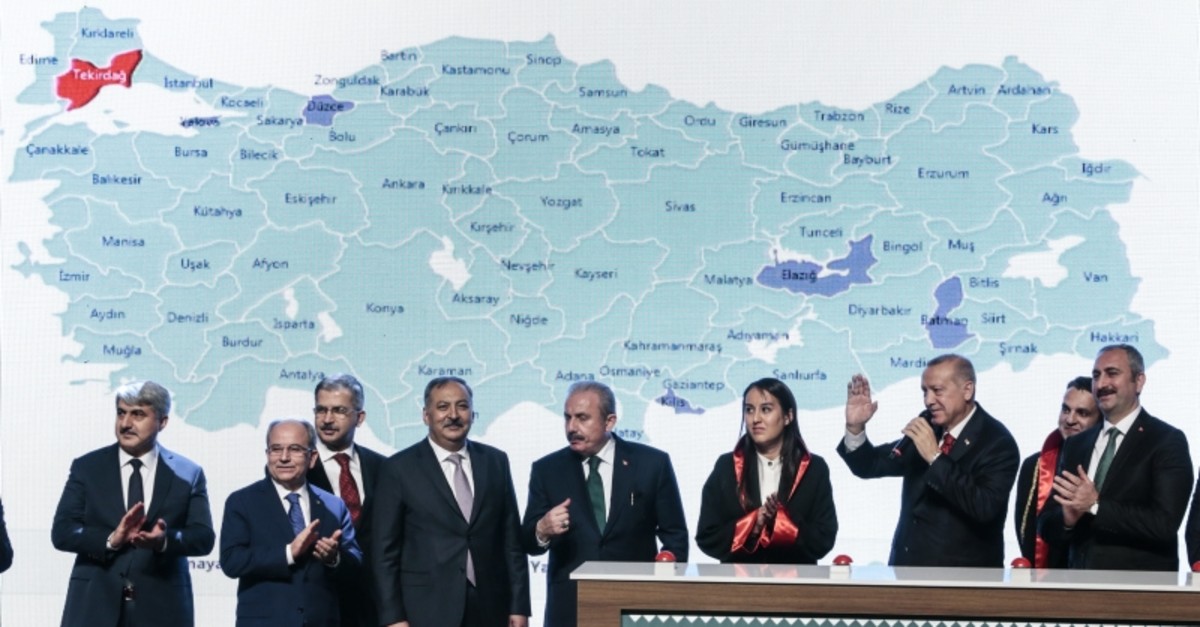 No judicial institution or judge is liable to make decisions in line with the interests of any party, politician or person, including him, President Recep Tayyip Erdoğan said Wednesday.

Addressing prosecutors and other members of the judiciary in the capital Ankara at a ceremony, Erdoğan said some politicians have crossed the line following the decision of the Supreme Election Council (YSK) to renew the municipal elections in Istanbul, referring to the remarks of the chairman of the main opposition Republican People's Party (CHP).

President Erdoğan said that according to the country's constitution, it is not even allowed to imply to a member of the judiciary to make a twist in his or her decision-making. He added that the opposition has gone so far in their statements that they only stopped short of "swearing at them."

"I myself also make criticisms sometimes [against legal decisions], but you cannot insult or swear," he said, underlining the difference between criticism and insults.

The result of the March 31 local polls in Istanbul was followed by lengthy discussions and objections by parties demanding a do-over election due to irregularities and unlawfulness since CHP candidate Ekrem Imamoğlu was awarded the certificate of the election with only a 13,729-difference in votes.

As a result, the YSK ruled seven to four in favor and annulled the results of the mayoral election in Istanbul. The renewed election will be held on June 23. The decision was based on unsigned result documents from the March 31 election and the fact that some ballot box officials were not civil servants.

Unhappy with the outcome, CHP Chairman Kemal Kılıçdaroğlu described the YSK decision as a "frame" against democracy and blamed seven members of the YSK, who voted in favor of canceling the March 31 elections, of being "gang members" who work for the interests of the ruling party. The statement received harsh criticism from other parties.

"It is an impertinence, presumption and immoral to imply that judges are acting like gangs," the president further said that as a person who has been in politics for 40 years, in his opinion, these people (who make these claims) are a disgrace to politics.

"I demand from members of the judiciary to overlook these kinds of impertinences but also demand from them to seek their rights within the scope of the law," he said.

"Turkey fights for an independent and national justice system that suffered attacks from various terror groups in the past, as well as from the political and military tutelage," Erdoğan said. "We won't allow Turkey to return to bad, old days when gangs within judicial system exercised arbitrary justice."

The president also paid homage to Turkish prosecutor Mehmet Selim Kiraz, who was taken hostage by the far-left Revolutionary People's Liberation Party-Front (DHKP-C) militants in his room at an Istanbul courthouse for several hours and murdered on March 31, 2015.

"One Selim Kiraz will be martyred but thousands more will come," said Erdoğan.

Shortly after Erdoğan's speech, Justice Minister Abdulhamit Gül said the Judicial Reform Strategy Document will be unveiled by the president on May 30, adding that the document will be "Turkey's roadmap" for 82 million citizens that will increase confidence in the country's judiciary.

Earlier Tuesday the president called on lawmakers, political parties and the entire nation to unite against threats, attacks and traps aiming to destroy the national unity of 82 million people.

Speaking to lawmakers at an iftar, fast-breaking, dinner at the Parliament, Erdoğan said: "We are inviting each one of our 82 million people to meet on Turkey's common ground."

He said the political competition should not hinder unity in the country.

"If we can overcome the security threats that we face today, economic attacks and traps aimed at destroying our national unity, we will hopefully be living in an utterly different Turkey in 2023," Erdoğan said.