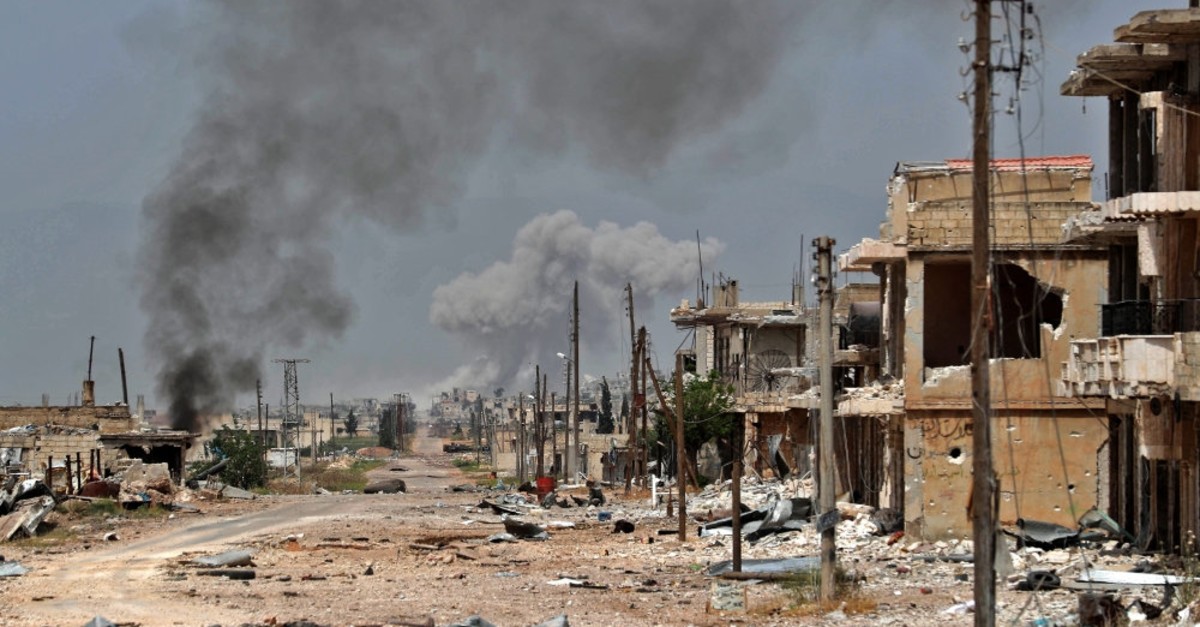 As conditions in the northwestern province of Idlib reach an unbearable level, causing an escalating humanitarian crisis, opposition figures called on the U.N. to take action against the regime's assaults

The Syrian Opposition and the Revolutionary Forces (SMDK) yesterday urged the international community to take the necessary steps against attacks by the Bashar Assad regime and Russia in the Idlib de-escalation zone, in which more than 200 civilians were killed in bombardments in recent weeks.

Stressing that the attacks on northwestern Syria are in violation of international treaties and agreements regarding the region, a SMDK statement called on the United Nations to show an effort to prevent attacks.

Idlib is the Syrian opposition's last enclave and has been protected from a massive regime offensive by the deal reached between Ankara and Moscow in September 2018. Its pre-war population of 1.5 million has swelled to around 3 million with new refugee waves after it was designated a "de-escalation zone" under the Astana agreement between Turkey, Russia and Iran in May 2017 to pave the way for a permanent political solution in Syria. Tens of thousands of Syrians trapped in other parts of the country were evacuated there under various cease-fire agreements.

The bombardment has killed 229 civilians, injured 727 and forced more than 300,000 people to flee since April 28, according to the Union of Medical Care and Relief Organizations (UOSSM), which provides assistance to health facilities.

Rami Abdulrahman, director of the Syrian Observatory for Human Rights, said that regime planes and helicopters launched more than 280 strikes on Sunday and Russian jets had carried out 15.

Another report by the Syrian Response Team, a humanitarian action group, said that about 420,000 people have fled as a result of the Assad regime's airstrikes since April 29, while 21 schools were destroyed. The group also indicated that 68 schools and 55 medical centers were targeted along with residential areas, and that 568 people, including 162 children, were killed.

After the attacks escalated, the inhabitants of the city began to flock to territories liberated by Turkey with operations Olive Branch and Euphrates Shield, including cities near the Turkish border including Atme, Kah, Deir Hassan and Kefer Lusin and 12 observation points set up in the region by the Turkish Armed Forces (TSK) in May 2018. Noting that southern Idlib and northern parts of Hama have been under heavy bombardment by the regime and Russia, the statement emphasized that some prohibited weapons such as white phosphorus bombs have been used in attacks on civilians. The statement also said that more than 2,000 decares of agricultural fields were burned to ashes as a result of white phosphorus strikes.

Use of white phosphorus is forbidden under international law. Phosphorus, which poisons a person when inhaled, causes major damage to the brain and lungs and leads to death. Despite calls for de-escalation, regime airstrikes have incessantly continued. In the latest attack on Sunday, 12 civilians were killed including four at a market in the town of Maaret al-Numan in the Idlib province, the Syrian Observatory for Human Rights said.

A witness of the attack, Hamdu Mustafa, said he was out shopping when the airstrike hit.

"The planes targeted civilians who were buying food for their children," he told Agence France-Presse (AFP).

Nearby, rescue workers known as the White Helmets directed a bulldozer to clear the debris.

Eight other civilians were killed elsewhere by regime fire in Idlib, the Britain-based monitor said. wIn a separate attack, a Syrian child was killed yesterday in regime artillery shelling on the opposition-held town of al-Bab in northern Syria, according to local sources.

The sources said that clashes broke out between regime forces and fighters of the Free Syrian Army (FSA) in Tadef, and regime forces and Iran-backed militias shelled the village of Dana, west of al-Bab, killing a 3-year-old child and injuring two people - a child and a woman.

While heavy airstrikes have worsened the humanitarian situation, Assad regime troops and opposition forces have been struggling for territorial gains in Idlib.

With the backing of Russian airstrikes, regime forces captured the small town of Kafr Nabouda in northern Hama, the third time it has changed hands in the latest offensive, sources on both sides said.

Regarding the Russia-backed offensive, a top opposition official said regime forces will be able to advance all the way to the Turkish border if they pierce opposition defenses in the northwest, urging Turkey to do more to shield the area from a major attack.

Fawaz Hilal, head of the "Salvation Government" that runs Idlib, expressed confidence that opposition fighters gathered in the Idlib region from all over Syria would be able resist the onslaught.

"This ferocious attack is a bone-breaking battle. If the regime is able to break our defensive lines in northern Hama and southern Idlib it will not stop until it reaches the borders," Hilal told Reuters. "We hope that the Turkish side will defend these positions they set up and the areas they entered and prevent Russian and Syrian jets from flying in the areas where they are present, and the shelling of surrounding areas."