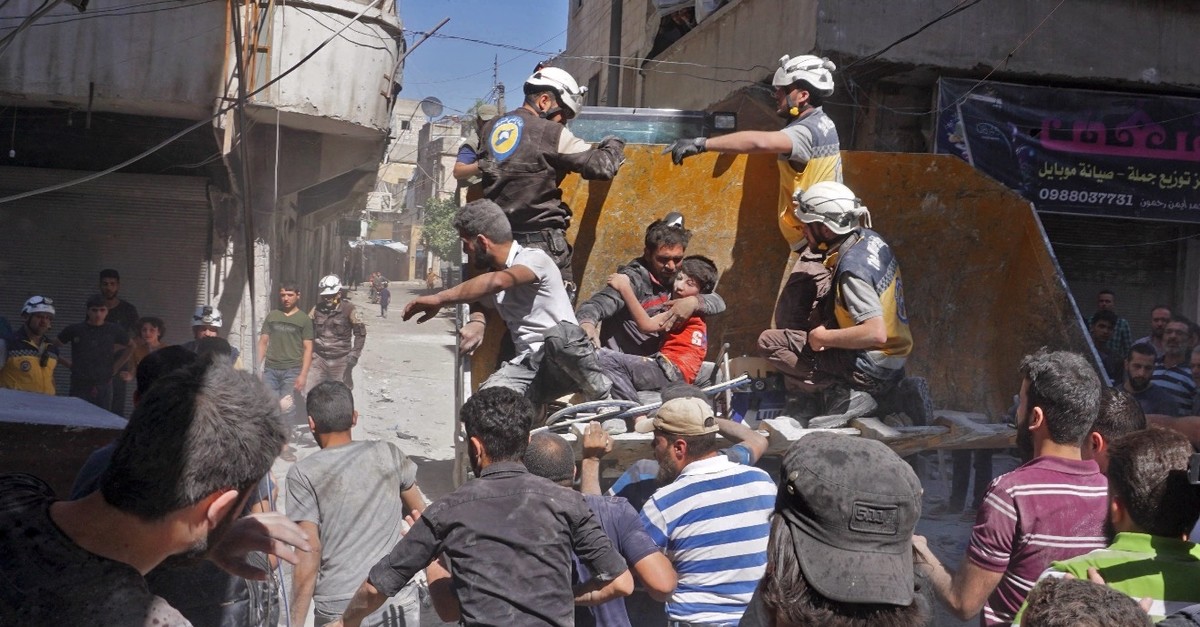 Idlib is on the edge of a further humanitarian catastrophe, as regime forces continue to target civilians and residential areas while the international community remains silent

Regime attacks targeting residential areas in Syria's de-escalation zone continue causing civilian casualties and destroying public infrastructure such as hospitals, schools and markets. At least 13 civilians were killed in attacks by regime forces and allied militias on de-escalation zones in northern Syria on Wednesday, according to sources with the White Helmets civil defense agency. Aerial bombardment did not relent, starting around the time for sahur — the last meal Muslims have before their dawn-to-dusk fast during the holy month of Ramadan. The sources said three people were killed in regime shelling of the village of Al-Bara in northwestern Syria.

Three more civilians were killed in attacks in the town of Habit and seven others in the village of Sarja in the southern countryside of Idlib, sources added. A large number of civilians were reportedly injured in the attacks. According to the Syrian opposition, the attacks on Habit were carried out by a Russian warplane that took off from the Khmeimim airbase in Latakia. Airstrikes, some using deadly barrel bombs, and shelling by both the regime of Bashar Assad and Russian warplanes have claimed a mounting civilian death toll over the past few weeks in Idlib province. On Tuesday, at least 24 civilians died in similar circumstances, in the single highest civilian death toll in the region since Damascus increased attacks in late April, the White Helmets reported on Tuesday, one day after it reported that 17 civilians were killed in separate attacks.

Regime forces and Iran-backed militias targeted rural parts of the Idlib and Hama provinces, including Khan Shaykhun, Kafr Nabl, Al-Hobait and Lataminah, according to the agency.

It said a hospital and a health care center were destroyed in the attack on Tuesday.

According to the Syrian Network for Human Rights (SNHR), a total of 24 health facilities had been destroyed by regime attacks between April 26 and May 24.

Another statement by U.N. officials said that a total of 22 hospitals and health clinics had been hit by air strikes or shelling since April 28, adding that some 270,000 people had been displaced by the fighting in Idlib since late April and aid agencies have been forced to suspend their work in some areas.

The violence, which has rattled a fragile truce deal brokered by Moscow and Ankara in September, is causing mass displacement and bringing Syria to the brink of the worst humanitarian catastrophe yet in its eight-year-old conflict.

The regime has not announced an all-out offensive to retake the entire opposition enclave, a large area which is home to almost 3 million people.

The civilian death toll has mounted in and around Idlib in recent days, reaching at least 296 over the past month, according to the Observatory.

Commenting on Turkey's efforts to prevent a further humanitarian crisis in Idlib, Defense Minister Hulusi Akar underlined that Turkey maintains its diplomatic contacts and close relations with Russia to provide stability and a cease-fire in the region.

"We expect Russia to use its influence on the regime and stop these attacks immediately," said Akar and added that thousands of people including women and children had to flee the region due to the ongoing drama and tragedy.

On the issue of Idlib, Turkey expects all parties to act according to the Sochi agreement signed between Turkey and Russia to turn Idlib into a de-escalation zone in which acts of aggression would be expressly prohibited.

Thus, Turkey calls on Russia to put pressure on the Syrian regime, which is backed by Russia, to stop their indiscriminate attacks targeting residential places and civilians in Idlib.

The Syrian regime, however, has consistently broken the terms of the cease-fire, launching frequent attacks inside the de-escalation zone.

US calls for end to violence in region

Ongoing hostilities between the Syrian regime and its allies, and opposition forces in northwestern Syria must end immediately, the U.S. said Tuesday.

State Department spokeswoman Morgan Ortagus told reporters that Washington "continues to be alarmed" by airstrikes being carried out by Russia and the Syrian regime in Idlib province. "Indiscriminate attacks on civilians and public infrastructure such as schools, markets and hospitals is a reckless escalation of the conflict and is unacceptable," she said. "The relentless violence is generating massive civilian displacement in Idlib."

Ortagus estimated that roughly 300,000 people have been forced to flee violence in Idlib, just hours after the U.N. said the number of persons displaced from the ongoing conflict is around 270,000.

Ursula Mueller, the U.N. deputy aid chief and U.N. Secretary-General Antonio Guterres' top humanitarian affairs official, tore into the U.N. Security Council on Tuesday, lambasting it for a history of inaction in Syria and questioning what it will do to prevent another catastrophe in the country's northwest.

"There is no question today about whether you, members of this council, are aware of the tragic humanitarian situation in Syria – you clearly are," Mueller told the council.

"The question today is what you will do to protect civilians in Idlib, the latest example of an entirely known, predictable and preventable humanitarian disaster unfolding before our eyes," she added.

Amid the ongoing attacks, Mueller fumed at the Security Council during Tuesday's session,

"Can't this council take any concrete action when attacks on schools and hospitals have become a war tactic that no longer sparks outrage? Is there nothing to be said or done when indiscriminate barrel bombs are dropped in civilian areas?" she said and added: "Millions of battered and beleaguered children, women and men cannot wait for another Geneva round to succeed. They need protection, and your action, now."

As regime attacks have been dragging the region into another humanitarian catastrophe, suspicions over the use of chemical weapons by regime forces have triggered further debates in the international community. France's foreign minister said on Tuesday there were signs that chemicals had been used in attacks by Assad regime forces on the opposition in northwest Syria, but they still needed to be verified. The United States said on May 23 it had received numerous reports that appeared consistent with chemical exposure after forces loyal to Bashar Assad launched an offensive on the opposition stronghold.

"We have a sign of the use of chemical weapons in the Idlib area but for now there isn't verification," Jean-Yves Le Drian told the French Parliament's foreign affairs committee.

"We are cautious because we think that the use of chemical weapons must be confirmed and lethal before we react," he said.

The United States, Britain and France launched air strikes in April 2018 against what they described as three Syrian chemical weapons targets in retaliation for a suspected gas attack that killed scores of people in the Damascus suburb earlier that month.

gime had shelled them with poison gas, leading some to suffer choking symptoms. They said they had not documented the attack because they were under bombardment when it occurred.