Turkey made millions around world smile during Ramadan 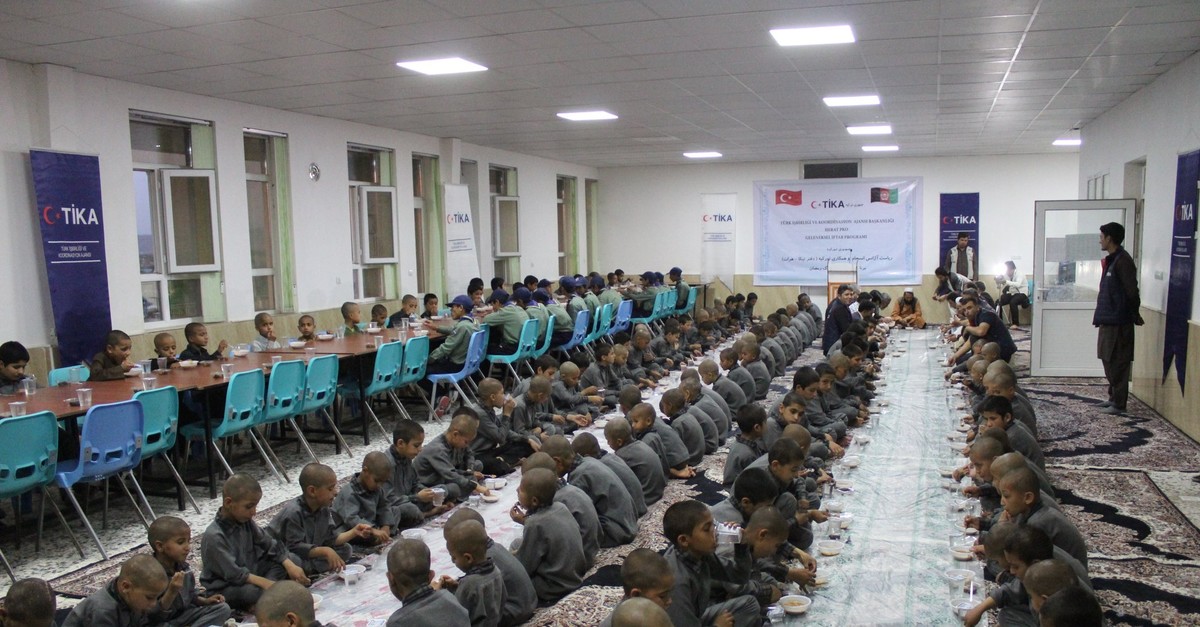 Turkey has made millions of people all around the world smile during Ramadan. Throughout the holy month, Turkish humanitarian and development agencies' aid and programs reached almost 100 countries on five continents. In addition to the Ramadan programs, Turkish agencies' development, humanitarian and emergency aid continued at full speed.

One of the major organizations that came to forefront when it comes to Ramadan aid was the Turkish Cooperation and Coordination Agency (TİKA), which carried out Ramadan programs in 75 countries during the month, where 400,000 people enjoyed the food aid and iftar (fast-breaking) programs. The agency also gave iftar dinners to 1,000 families in Gaza every day. TİKA conducted programs as a part of development and emergency aid initiative during Ramadan in Thailand, Myanmar, the Philippines, Malaysia, Italy, Argentine, Cuba, Sri Lanka, Mexico, Afghanistan, Tajikistan, Albania, Romania, Hungary, Lithuania, Poland, Yemen, Tanzania, Namibia, South Sudan, Ghana, Ethiopia, Angola and more.

Turkish nongovernmental organizations (NGOs) and aid agencies paid special attention to Idlib, Syria this Ramadan where ongoing conflict has instigated a humanitarian crisis in the region. The Turkish Red Crescent distributed iftar for 10,000 people every day in Idlib, the Turkish Diyanet Foundation also organized iftars for 1,000 people every day in the Atme, Kah and Deir Hassan regions. The Turkish Red Crescent reached an almost 15 million people in Turkey and in many countries all around the world with its food aid and iftar programs. Also, the association carried out programs for orphans in 38 countries on Orphans Day, which is remembered on the 15th day of Ramadan every year. With the theme of "Don't forget your brothers and sisters, you are an expected one," Turkish Diyanet Foundation also reached 98 countries and gave TL 22.3 million in aid to millions.

Accordingly, TİKA has conducted many programs with the focus on the humanitarian aspect of the crisis with the "Turkish Development and Aid Model" from the Balkans to Africa and Central Asia to Latin America.

TİKA gave a hand to the victims of Hurricane Idai which affected many people in Mozambique this March. The humanitarian and emergency aid programs of TİKA has helped heal the wounds of 600 families in Mozambique.

The agency also conducted an emergency medical staff education program with the coordination of the Statistical, Economic and Social Research and Training Center for Islamic Countries (SESRIC), and the Sudanese and Turkish Health Ministries. The education program was conducted in 12 member countries of the Organisation of Islamic Corporation (OIC) such as Djibouti and Chad. Under the program, initially 58 Sudanese emergency medical education staff started to share their experiences with other member countries by this year.

With the cooperation of TİKA and the Yeryüzü Doktorları Association, 51 major surgery operations were conducted in Darfur, at the Nyala-Sudan Turkey Education and Research Hospital this year. As one of the common illness in the Darfur region, fistula patient's treatments were made in the hospital.The program "Promoting Inclusive and Quality Healthcare in Kenya (PIQH)," which is carried out by TİKA, made medical screenings in Kenya's second largest refugee camps, Kakuma on Feb. 8-15, 2019. With the coordination of TİKA and the UNHCR, 100 medical personnel from 10 different countries collaborated and worked together during the screenings.

TİKA also conducted an international cerebral palsy symposium in El-Qued, Algeria this year. During the event, 50 specially designed chairs for children with cerebral palsy were distributed to their families.TİKA also reached out to the victims of the hurricane Kenneth in Union of the Comoros this year where 1,500 families were affected from the hurricane including in the capital Moroni. The people of Comoros received the emergency and humanitarian aid. In addition to that 37.5 tons of rice was distributed to Foumbouni, Dembeni, Mohoro, Pidjani, Mitsoudj, Iconi, Karthala, Koumbani, Itsikoudi, Hahaia, Mbeni, Chezani and Mitsamiouli.

With the coordination of TİKA, the Turkey-Mexico health center opened this year in the Oaxaca region of Mexico which was most affected by an earthquake in 2017. The center, the only health facility in the village, will be giving a free health services to the 15,000 residents of El Espinal in Oaxaca.