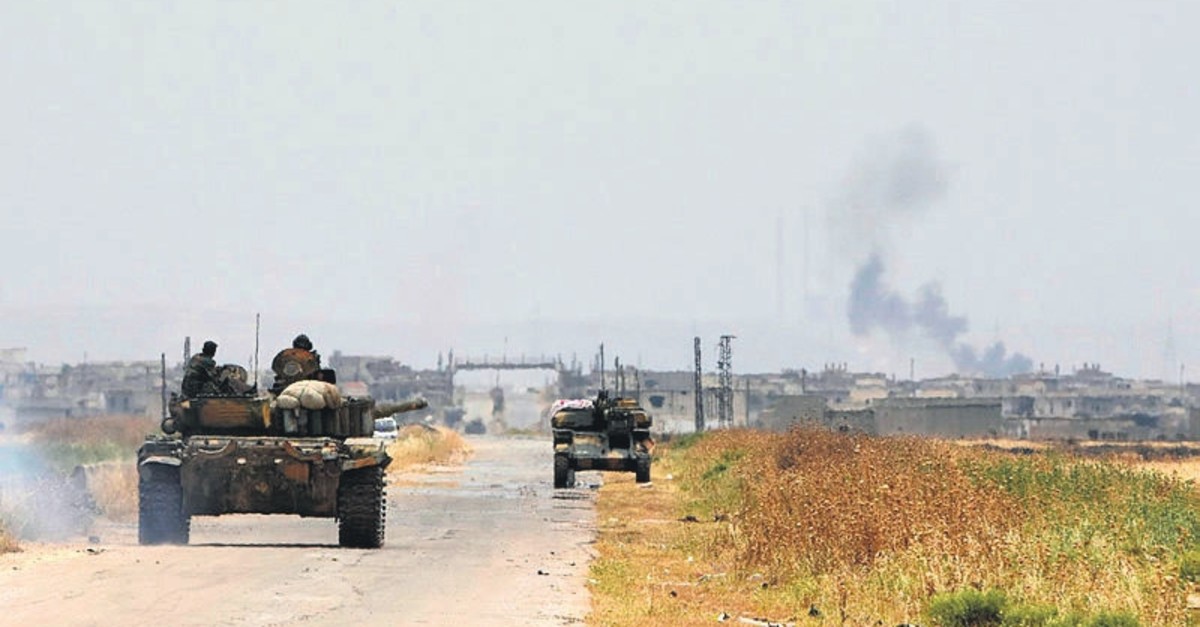 A tank belonging to the Syrian regime forces drives on a road leading to the town of Jalamah in Syria's Hama governorate as smoke billows above buildings, June 8, 2019.
by Daily Sabah with AA Jun 10, 2019 12:17 am

A Syrian revolution icon and footballer succumbed to his wounds at a Turkish hospital on Saturday, according to the Syrian Observatory for Human Rights.

Abdelbaset Sarout was wounded in clashes in Syria's northern Hama countryside and transported to Turkey for treatment, the rights group said.

"He died of his wounds on Saturday," said Rami Abdurrahman, head of the U.K.-based Syrian Observatory.

Sarout, 27, represented Syria at the under-17 and under-20 level as a goalkeeper and became an opposition commander when his hometown Homs came under regime attack from 2011 to 2014.

He was featured in the 2013 documentary "The Return to Homs" that won a number of international awards.

Sarout, for many, was also the singer of the revolution.

In YouTube videos, he sang songs of independence and martyrdom.

"Oh father, our homeland is bleeding, our soil saddened, oh father, the children cry but who will answer their call, oh father, martyrdom is my dream, my dream for years," he sang in a 2016 video.

Sarout was evacuated from Homs in 2014 under a surrender deal with the government to end a two-year siege of its historical center, according to the observatory. His father and four of his siblings were killed during bombardment and clashes in Homs, it said.

Turkey and Russia agreed last September to turn Idlib into a de-escalation zone in which acts of aggression would be expressly prohibited. The Syrian regime, however, has consistently broken the terms of the truce, launching frequent attacks inside the de-escalation zone.

What has been happening in Idlib is a new version of the tried-and-true method that worked for the Syrian regime forces in their previous, destructive campaigns that retook the city of Aleppo in 2016 and other strategic territories. Idlib is the opposition's last enclave. Its prewar population of 1.5 million has swelled to around 3 million with new refugee waves after it was designated a de-escalation zone under the Astana agreement between Turkey, Russia and Iran in May 2017 to pave the way for a permanent political solution in Syria. Tens of thousands of Syrians trapped in other parts of the country were evacuated there under various cease-fire agreements.

International observers and monitoring agencies state that the regime intentionally targets civilians, residential areas and infrastructure, as the international community keeps their silence over the ongoing humanitarian catastrophe.

Meanwhile, regime forces and Iran-backed terrorist groups carried out an artillery attack targeting areas near a Turkish observation point in Idlib's de-escalation zone. No damage was detected at the observation point located in the Morik district of northern Hama.

The Turkish Armed Forces (TSK) set up 12 observation points in May 2018, following the ninth round of Astana peace talks.